How Drone Racing Is Quickly Growing As An International Sport

This article titled “Attack of the drones: sport’s next big buzz” was written by Simon Parkin, for The Observer on Saturday 11th February 2017 17.00 UTC

They have been responsible for innumerable deaths in the Middle East during the last decade and, if Amazon has its way, will deliver millions of toasters, gift sets and novels in the future. But recently drones have begun to fulfil a less utilitarian kind of role: competition in the nascent world of futuristic motorsports. A confluence of technological advances has made drone racing possible. A minuscule camera, mounted on the drone’s nose, allows the pilot, as competitors are luxuriously titled, to control the vehicle through virtual reality-style goggles, as if perched in its tiny cockpit.

With powerful lithium batteries, the size of which dictates the speed class of the drone, these machines, which are typically the size of a box of tissues, can reach speeds in excess of 120mph. Studded with coloured LEDs, they fly like hyper-evolved, fluorescent mosquitoes and, thanks to their size and manoeuvrability, can make use of those areas of a sports stadium that are usually out of bounds: streaking over the pitch, for example, before grazing through a window, along a corridor and out again into the night sky. Impromptu courses can be set up anywhere. In September, during an event timed to coincide with the Paris Drone festival, pilots raced along the Champs-Élysées, watched by 150,000 spectators.

Zealous entrepreneurs closely follow on the tail of any emerging sport. Each invariably hopes to corner the market by establishing the definitive league. “When I first started the Drone Racing League, once a week I had someone telling me they were launching their own league,” Nicholas Horbaczewski, co-founder of the DRL, told me. Horbaczewski watched his first drone race in a car park outside a Home Depot in New York City. “I thought: how do we elevate this to a level where we can put it on TV?” Since its founding in 2015, the DRL has attracted serious investment – $12 million to date, with high-profile investors ranging from New York’s Lux Capital to media partners such as MGM, ESPN and Sky Sports.

Last week, Horbaczewski announced that the German insurer Allianz would sponsor the DRL’s 2017 championship, the final event of which will be staged at London’s Alexandra Palace in the summer. It’s a legitimising deal. Allianz is a major investor in Formula 1 racing, football (the company has bought the naming rights to six stadia around the world, some of which will be used in the forthcoming DRL championship) and a sponsor of tennis, golf and swimming tournaments. “What Red Bull has done with extreme sports is what we want to do with digital sports,” explained Allianz’s Jean-Marc Pailhol. “We want to make drone racing one of the main sports in the world.”

There are major obstacles standing in the way. Filming high-speed drones, zipping through courses as tall as they are wide, is an enormous broadcasting challenge (one tough enough to prevent the DRL championship from being broadcast live on Sky this year). Then there are significant technical concerns. The ultimate aim is to allow spectators to pull on their own headset in order to watch the action from the perspective of their favourite drone. Finally, there’s the need for sufficient money in the ecosystem to support young pilots so that they can afford the time off work to compete. “Executing successfully is extraordinarily difficult,” said Horbaczewski. “You have to be a tech firm, a media company and a sports league all rolled into one.”

Then there’s the issue of competition. Horbaczewski claims that with the emergence of the DRL, drone racing is a “professional sport now”. Rival leagues, he said, have faded away and, in the DRL, there is “finally a well-organised sports league”. These claims are vigorously disputed by Richard de Aragüés, director of the 2011 documentary film TT3D: Closer to the Edge and founder of the British drone racing team Tornado XBlades Racing. “This is far from a one-horse race and many of us close to the sport feel the DRL press claims are somewhat misleading,” he told me. 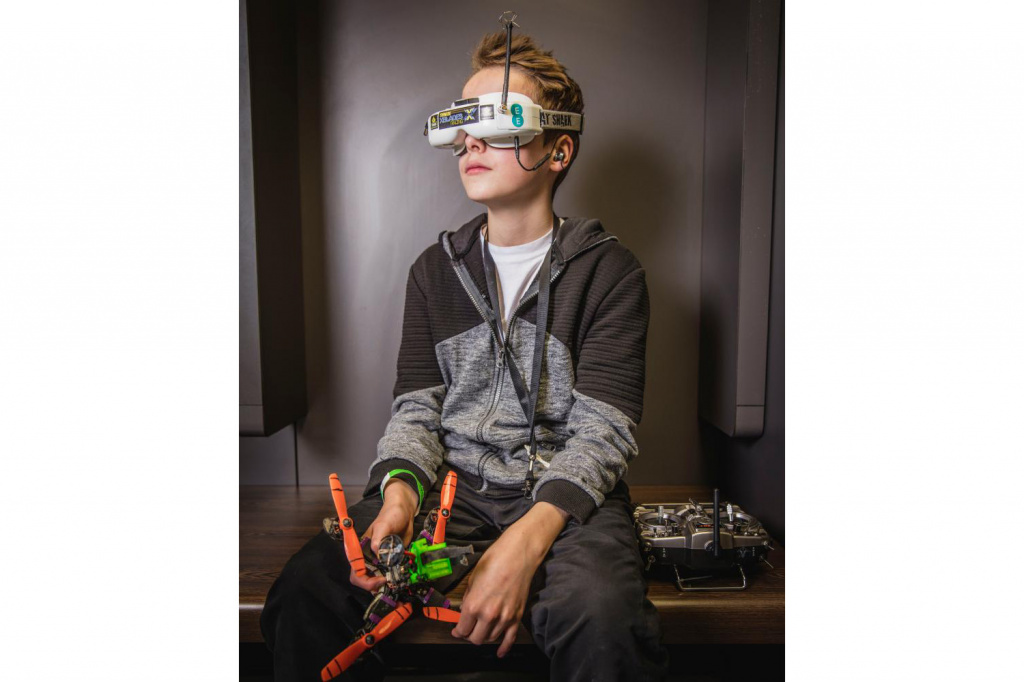 In the US, for example, the rival DR1 league has TV deals in place with Eurosport, Discovery and the Science Channel and is backed by the vast commercial clout of PepsiCo. While the DRL supplies a standardised drone to its pilots, the DR1 follows Formula 1’s approach, allowing teams to customise their craft. While the DRL is strictly indoorsy, the DR1 also stages races in outdoor venues: castles, abandoned mines and ravines. There are differences, then, but not along the amateur/professional divide. “DRL is definitely not the only professional drone racing league,” a spokeswoman for the DR1 said.

Three of the top-ranked British drone pilots, including current world champion, Luke Bannister, are all members of De Aragüés’s team. While 16-year-old Bannister was too young to race in the DRL, team-mates Gary Kent, winner of the French Drone Nationals race, and Mac Poschwald, a Drone Champions League champion, both turned down DRL contracts. The small print, according to De Aragüés, forbids signees from having any third-party sponsorship. This has ruled out any of the top Korean players from signing to the DRL, as companies typically fund them as an investment opportunity. “The sponsorship deals some of our team members already have in place are worth more than the $10,000 annual salary that was offered by the DRL,” De Aragüés said.

It’s not just the money. The DRL contract reportedly forbids pilots from racing in any non-DRL competitions that create content, such as broadcast footage, from the event, a move presumably intended to squeeze out the competition. “We would have loved to have participated in their league,” said De Aragüés. “But not to the exclusion of the other leagues and sponsors.” The result is that in 2017, many of the most successful pilots in drone racing are absent from the DRL’s roster. “It would be like the ATP tennis championship not having Federer or Nadal participating,” said De Aragüés.

Horbaczewski is eager to downplay the absence of top names such as Shaun Taylor and Minchan Kim from his league. “Although there is a broad ecosystem of drone racing events out there, they are all sort of amateur events,” he said. “So it’s very tough to say what other events represent a talent pool we can rely on. Each event is several days long. This must be a full-time occupation for the pilots.” 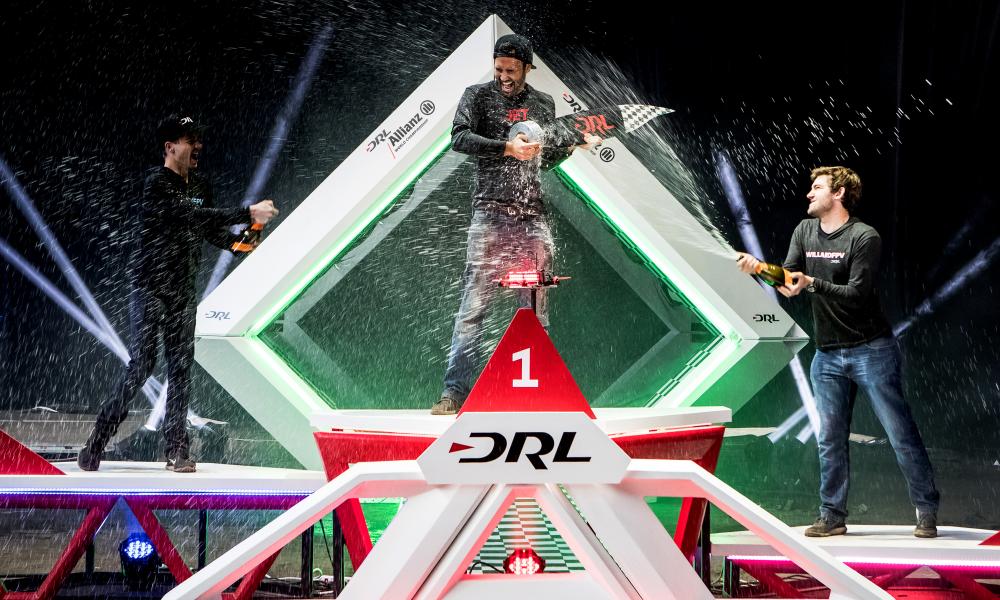 But for 27-year-old Matthew Evans, one of the few European players to sign to the DRL, being a full-time pilot is, for now, just a dream. “I still have to work full time as a software engineer, so I have to try to juggle my time very carefully,” he told me. “I know some of the people who turned the contract down and I think that just came down to personal circumstances. It depends what’s going on in your life, what other championships you want to take part in.” The winner of DRL’s inaugural championship in 2016 won a $100,000 contract. But for drone racing’s financial backers, the risks and potential rewards are far greater. Until winners and losers are settled, the rivalry off the pitch will be just as keen as on.

PHOTO: A drone flies around the track at the 2016 World Drone Prix in Dubai, won by British teenager Luke Bannister. Photograph: Bloomberg via Getty Images

This article titled “Attack of the drones: sport’s next big buzz” was written by Simon Parkin, for The Observer on Saturday 11th February 2017 17.00 UTC

They have been responsible for innumerable deaths in the Middle East during the last decade and, if Amazon has its way, will deliver millions of toasters, gift sets and novels in the future. But recently drones have begun to fulfil a less utilitarian kind of role: competition in the nascent world of futuristic motorsports. A confluence of technological advances has made drone racing possible. A minuscule camera, mounted on the drone’s nose, allows the pilot, as competitors are luxuriously titled, to control the vehicle through virtual reality-style goggles, as if perched in its tiny cockpit.