In light of the fact that today marks Netflix's 20th birthday, Logan Woods discusses how the television age as we know it has hit midnight and our media diet is about to get weird

Beginning at the end of the 19th century, it took 31 long years before a new technology was widely accepted by the masses. A decade ago, it took less than five. Though the adoption rate has shrunk, the impact of each wave has not.

Three decades went by before radio had penetrated 25% of American homes and President FDR began his now famous Fireside Chats. It would take 26 years before TV had the same reach, culminating in the first televised Presidential debate, which some credit as landing JFK in the White House. Late in the 20th century, the PC would take only 16 years to find favor with the masses, the Internet just 7, Social Media 5… you get the picture.

Today we are indeed in the era in which things move—and are broken—extremely quickly. 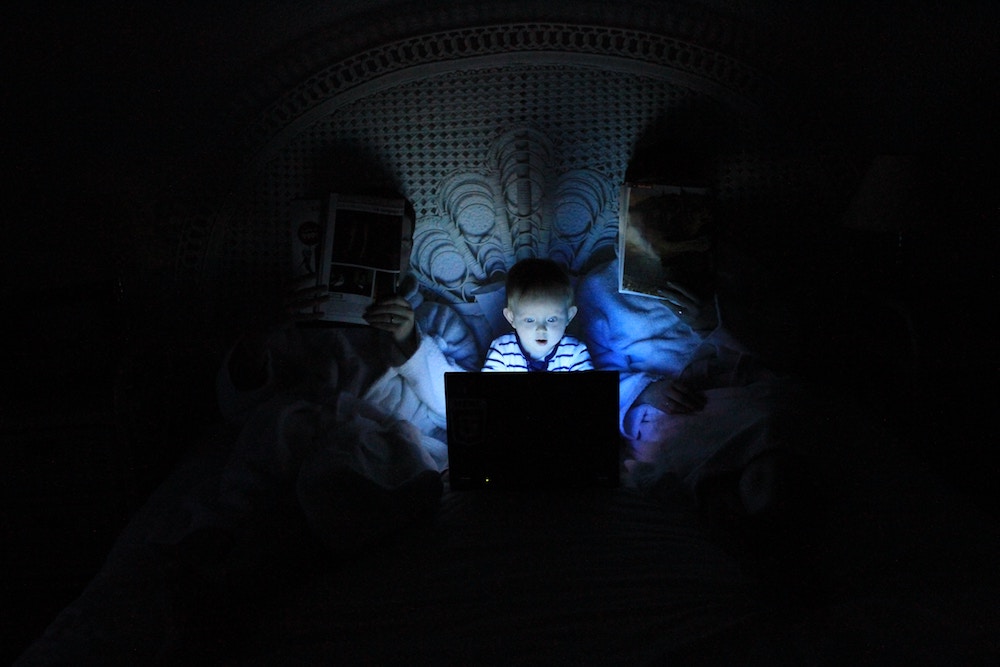 Photo by Ludovic Toinel on Unsplash

The next Goliath to completely collapse under the weight of digital disruption will be traditional television and it’s going to be more dramatic than a simple channel change. To see it, we need to step back and take stock of the many moving parts involved in this imminent paradigm shift.

Plenty of obvious signs indicate a transition is well underway. One need only resume their latest Netflix binge to know this. But there is one old trope that’s just this year begun to ring as the veritable bell to toll for traditional TV.

2017 is the year online advertising budgets will eclipse TV advertising spend. Acting as a bellwether, that transfer in investment marks a dramatic and irreversible sea change. There will be winners and there will be losers and it’s going to be a very irregular media landscape when the dust settles. 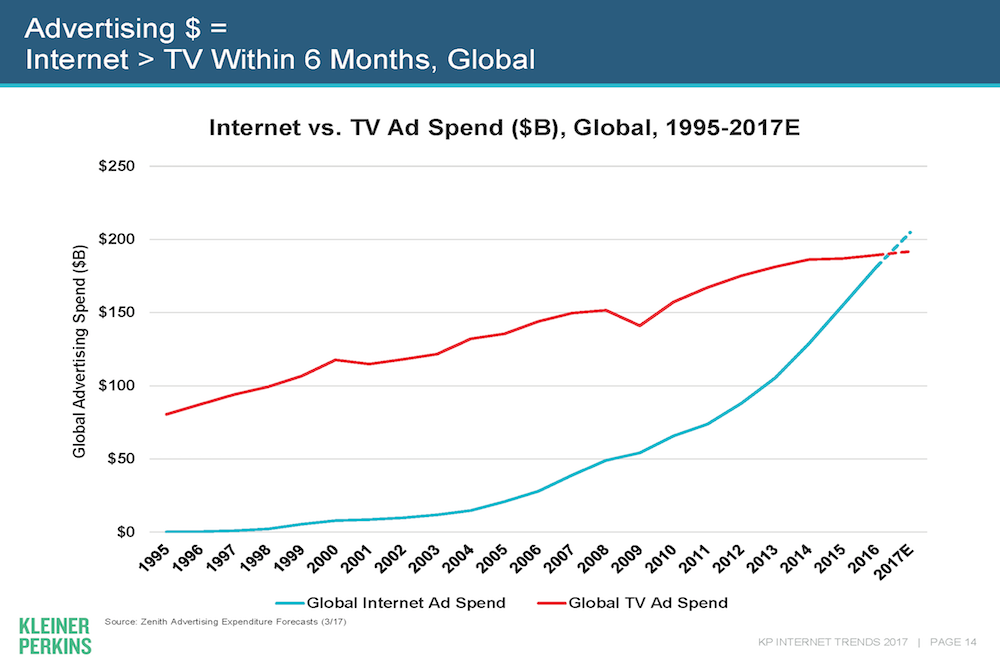 It all comes down to eyeballs. This summer Facebook announced that 2 billion people a month were checking in across the globe to give Mr. Zuckerberg’s platform their undivided attention. Compare that to the largest television network in the world, Chinese Central Television, with an audience of a mere 1.2 billion. Just in terms of centralized investment—let alone the invaluable arsenal of data and targeting tools — nothing in TV comes close to what’s available online. And it’s not just the battle for audience size that traditional TV is losing either. In a Q1 2017 Nielsen report, both Millennials and Gen Xers in the United States consumed substantially more content online than traditional TV (including live news and sports), with particular growth in the mobile web. Even Baby Boomers spend only about 25% more time in front of traditional TV than digital media. Audiences and attention spans both have officially shifted and the money is following. 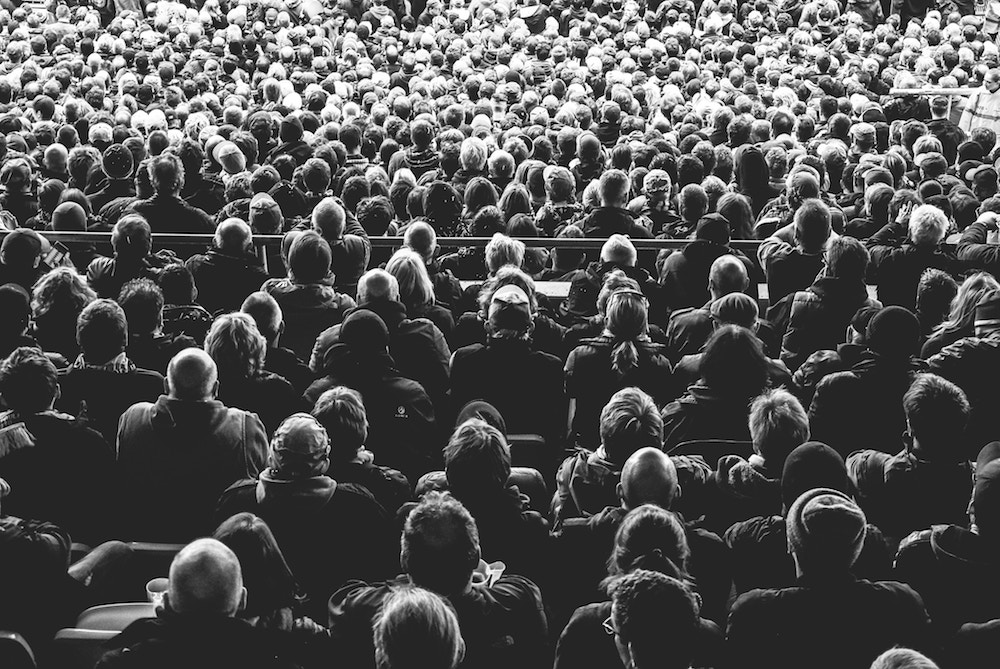 Photo by davide ragusa on Unsplash

Stakes could not be higher. For traditional TV leaders like CBS, who in Q1 2017 reported that advertising was nearly 50% of its entire revenue and declining, this is a potential existential threat. To counter that trend, CBS All Access is rapidly ramping up its SVOD output—streaming video on demand—and says it’s confident it can hit its goal of 8 million subscribers by 2020. But that will be far little, far too late. Last year’s season premiere of Orange is the New Black on Netflix—a single episode—garnered 6.7 million views in its first 48 hours alone. If the content creators of culture defining series like The Late Show, 60 Minutes, the Superbowl, the Olympics, and your local evening news are in troubled waters, what’s going to happen to TV as we know it?

At first, a bit of chaos. Shots across the bow have been fired from all sides and viewers will increasingly not know where to turn. Before breaking down the trends, just skim through a few of the major developments that have taken place in only the last couple months.

And as all that plays out, what had been the hearth of the home throughout most of the 20th century—the traditional TV—is being either abstracted into modern furniture or literally erased from the floor plan entirely. 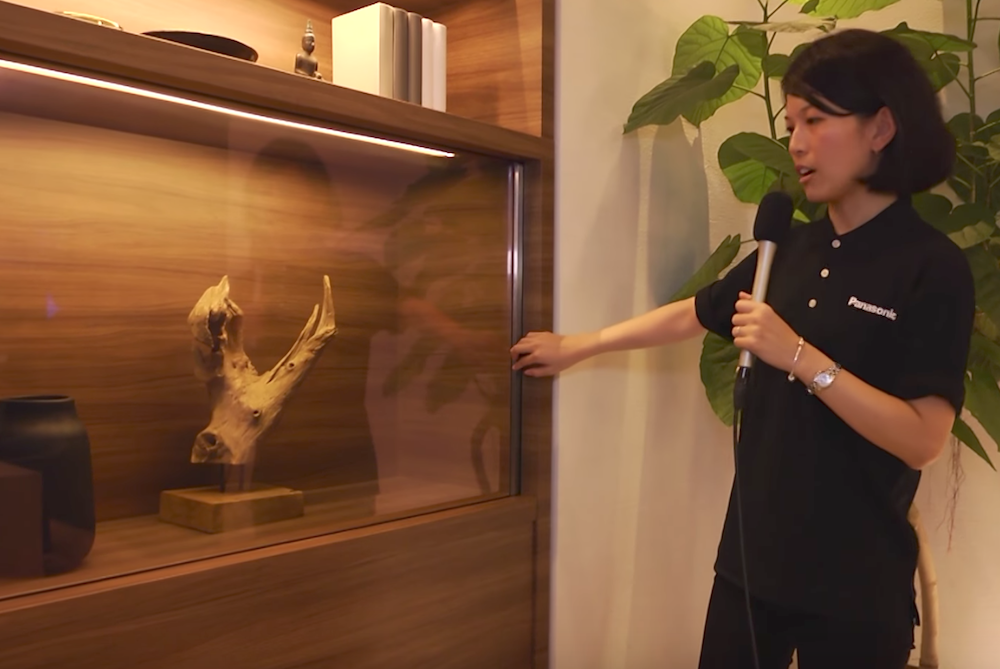 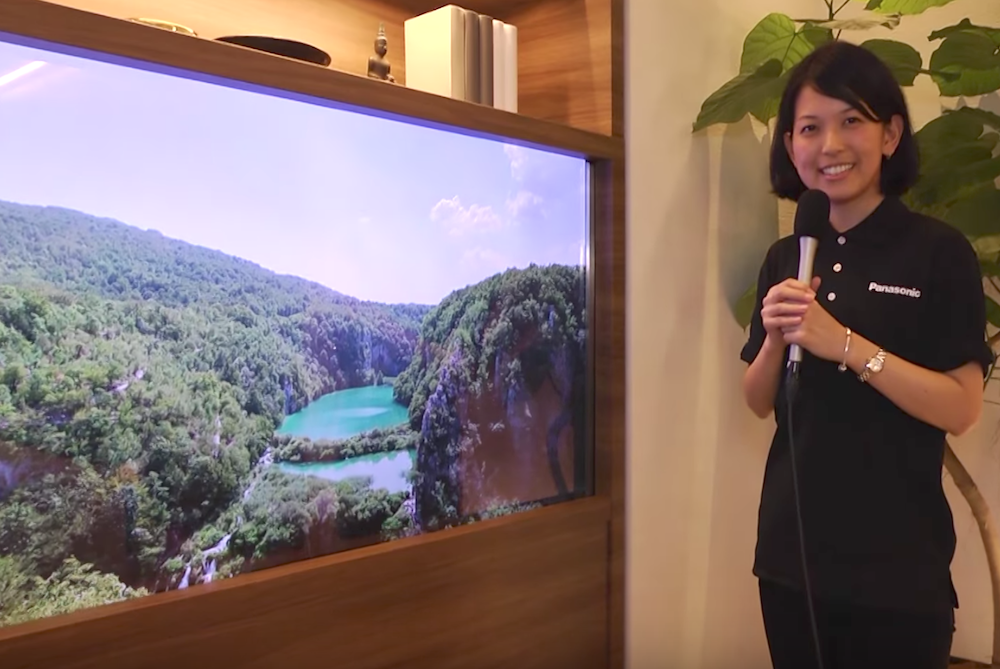 The upheavals in the TV landscape itself have had about as many plot twists in the last year alone as the entire Game of Thrones series, and for awhile viewers may be more overwhelmed with choice than spoilt for it.

Each major player in this battle dominates a very particular but singular aspect of the TV experience: device, distribution, or content. What has in the past been a clear division of labor is now a winner takes all melee. Each expert is attempting to encroach on the other’s territory. Data and distribution goliaths Facebook and Amazon now both make next gen devices and original content; best-in-class device king Apple is joining the original content fray; storytelling maestro Disney is breaking with Netflix to launch its own exclusive streaming service. Each brings a base loyal to one facet of the complete entertainment experience, and the winner may be determined by who can master the arts of the others. That requisite ambidexterity is where things get weird.

THE WEIRDENING WAYS OF WATCHING. AIS VS ARTISANS.

As the lines get blurred between original content, distribution, and data-driven decisions, who exactly is going to be the author of all the new media we consume? This is especially pertinent considering how broad the spectrum of media now is, from slow TV epics to snackable “stories” and just about everything but the traditional 30 min sitcom. 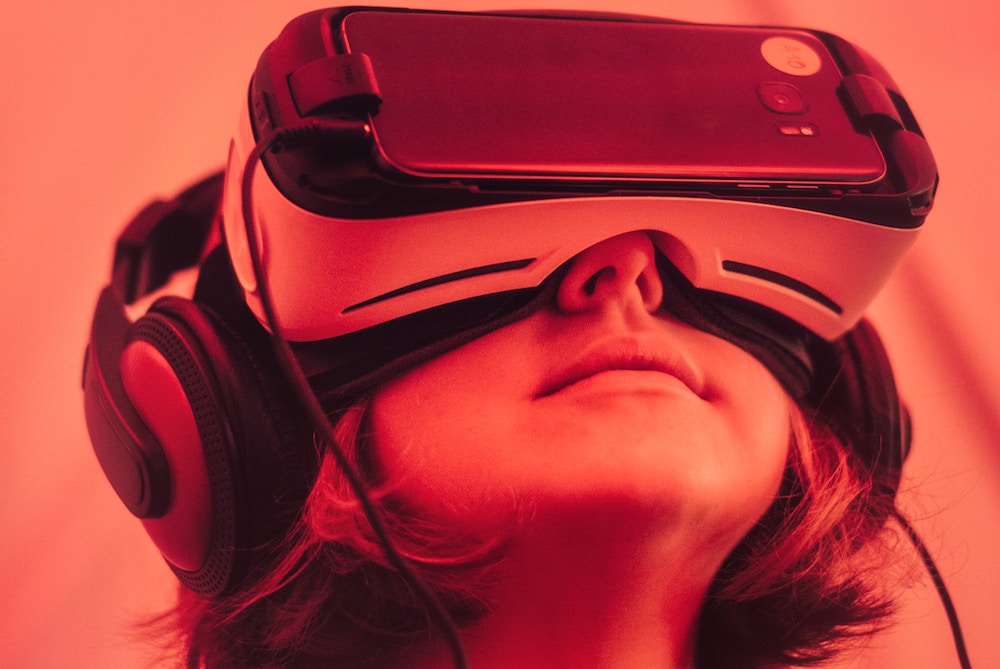 Photo by Samuel Zeller on Unsplash

One of the rifts we’ll soon see is the taste of AIs vs. artisans. Consider “Heliograf,” the news-scribing bot given a “desk” at Jeff Bezos’ Washington Post last year. It’s not doing investigative journalism, but it is responsible for cranking out the more menial news alerts of the day. Google just announced its own AI will begin writing news stories for publishers at a local level. Meanwhile, Adobe’s machine learning program Sensei is seeking to automate big chunks of web design and plenty others are experimenting with other types of automated design. How long before the majority of our daily video intake — from news summaries to short-form entertainment and even the ads served in between — are all created primarily by bots? If AI-first media can shrink production costs to a low, annual SAS fee from someone like Adobe, or maybe Facebook or Amazon, the winners of next-gen TV will see a strong incentive to delegate to bots in order to meet the growing demand for that long tail of content, especially all that’s predictable and “snackable.”

To take it even a step further, if we can now anticipate the desires of custom audiences (just ask Cambridge Analytica about that), who’s to doubt the arrival of tailored plot twists for just the right crowd?

Crafted, artisan, human-made content will come to be a valuable and distinguishing feature, reserved only for the richest storytelling… and possibly only those willing to pay a premium for it. And that’s just AI. How will the viewing experience evolve when live-streaming 360° cameras fit on a football helmet and a “second-screen” becomes obsolete? Rules in every category are about to be rewritten. 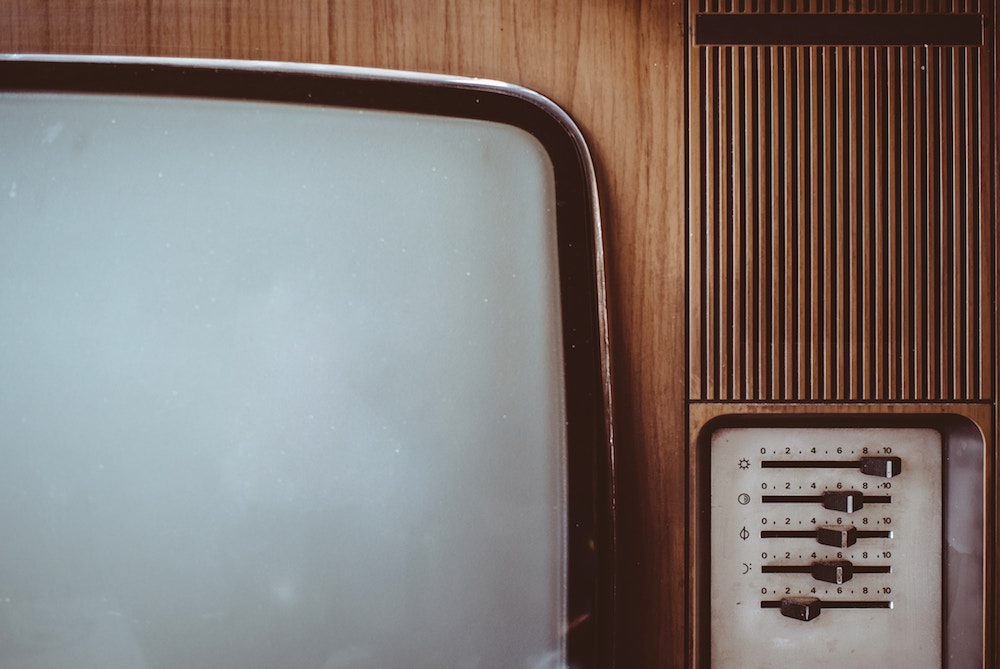 Photo by Pawel Kadysz on Unsplash

What we’re witnessing is a redefinition of the very idea of television. To bring McClure into the mix, we aren’t just debating whether the medium is the message, we’re debating what even constitutes the medium, let alone what it will subsequently have to say.

The winner of next-gen TV will have to wear a lot of very complicated hats. As viewers become increasingly device, distribution, and content omnivorous, they will continue to demand more ambidexterity and more resources by whoever rises to the occasion. Those from the old guard who are quickly forming early alliances with the new guard, like NBC with Snapchat and FOX with Facebook, might have a fighting chance. Those who fail to move fast will be broken.

Crisis in the newspaper business may have been merely a harbinger of what’s to come for traditional TV. Now that the mobile web has scaled far beyond the blog to support not only video but interactive, on demand, 360°, AR, VR, AI, live streaming, advanced targeting, and tracking — and has more engaged eyeballs and revenue to boot — traditional TV is utterly outgunned. 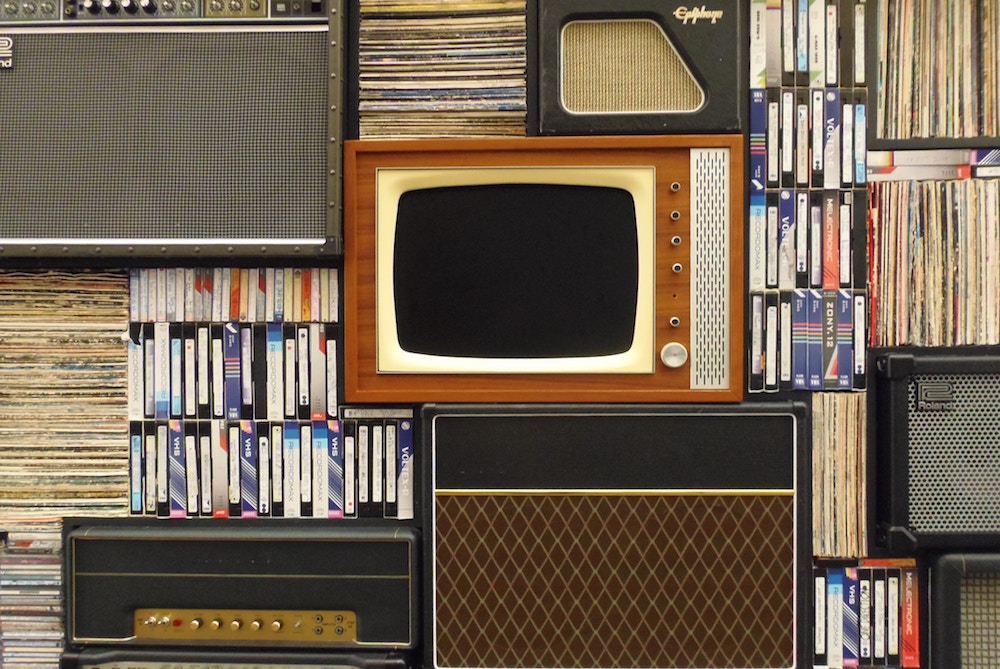 Photo by Tracy Thomas on Unsplash

For a teaser of how this battle might play out, refer to the newly minted News Media Alliance — a group of nearly every major news outlet large and small created specifically to lobby Congress to tweak antitrust regulations and allow them to collectively negotiate with Google and Facebook about… ad buying. And while you’re using Google to find that news, check again who’s rebuilding The Washington Post.

Every house ultimately proves to be made of cards. Traditional television is about to get reshuffled.

Logan Woods is a creative strategist living in Berlin, Germany.

Beginning at the end of the 19th century, it took 31 long years before a new technology was widely accepted by the masses. A decade ago, it took less than five. Though the adoption rate has shrunk, the impact of each wave has not.

Three decades went by before radio had penetrated 25% of American homes and President FDR began his now famous Fireside Chats. It would take 26 years before TV had the same reach, culminating in the first televised Presidential debate, which some credit as landing JFK in the White House. Late in the 20th century, the PC would take only 16 years to find favor with the masses, the Internet just 7, Social Media 5… you get the picture.

Features The New Hustle: How Young Creators Are Cutting Out The Retailer