Why 2017 Was The Year For Disruptors

From upstarts overtaking bigger rivals to tech firms valued more than superstores, 2017 was a year of seminal moments

This article titled “Year of the disruptors: bitcoin, Tesla and the slow demise of cash” was written by Rupert Steiner, for theguardian.com on Sunday 31st December 2017 12.25 UTC

2017 was a year marked by mini-upsets in the business world that, taken together, represented a changing of the old guard and a new establishment taking shape.

Technology fuelled a revolution which saw upstarts in retail, manufacturing and finance overtake long-established players. Whether it was payment cards or Bitcoin trumping cash or currencies, or the battery coming of age over the internal combustion engine, these were seminal moments.

Maureen Hinton, a director at research firm GlobalData said: “These disruptors have adapted to new demand and changing lifestyles far quicker than traditional businesses often because they can create from scratch, rather than having to adapt an existing model.”

The disruptors made 2017 their own in a good year for the upstart. 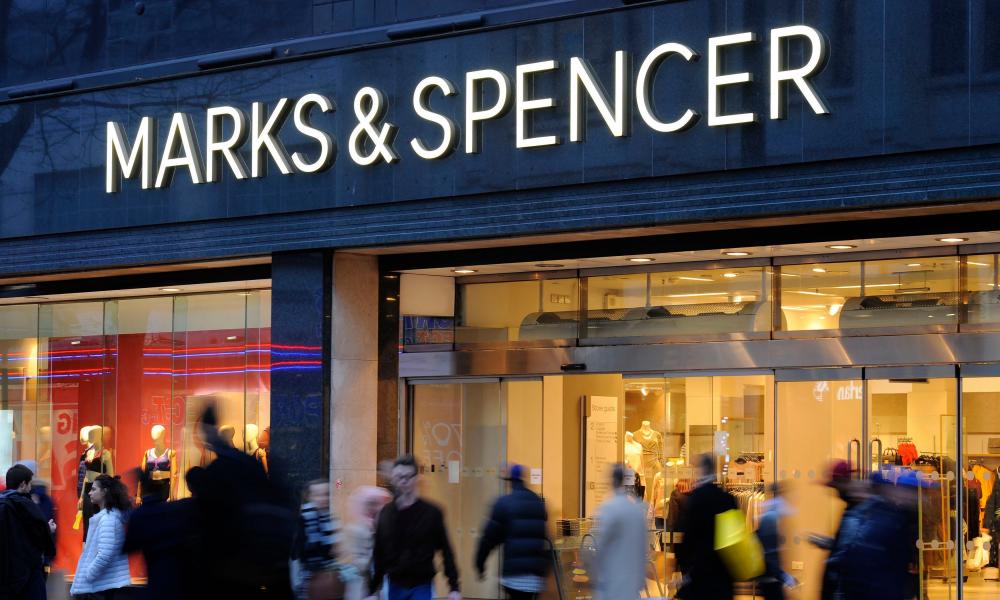 The biggest upset of the year in the UK was in retail. Marks & Spencer, Britain’s favourite clothing retailer, was overtaken last month by Asos, the fashion website still listed on the junior AIM market.

This was seen as a pivotal moment on the high street because M&S, which dates back to 1884, was dwarfed by its 17-year-old rival in terms of its stock market value. A month on and the gap is even wider with Asos worth £5.2bn compared with M&S’s £4.9bn.

The power of the relatively new online player over such well-established retail royalty is a sign of the times on the high street. Shopping habits have changed. Customers have fallen out of love with tired and dated town-centre shops and there is a growing trend toward buying items online.

M&S has struggled in recent years to deliver on-trend designs in women’s clothing from its expensive stores.

Asos, which used to be called As Seen on Screen, started out by selling cheap copies of celebrity fashion items, and has carved a niche delivering cheap popular designs to a faithful and growing band of young shoppers.

This could not have come at a worse time for M&S’s chief executive, Steve Rowe, who has just cbegun a five-year transformation programme and has promised to bring the company’s clothing business back on track. 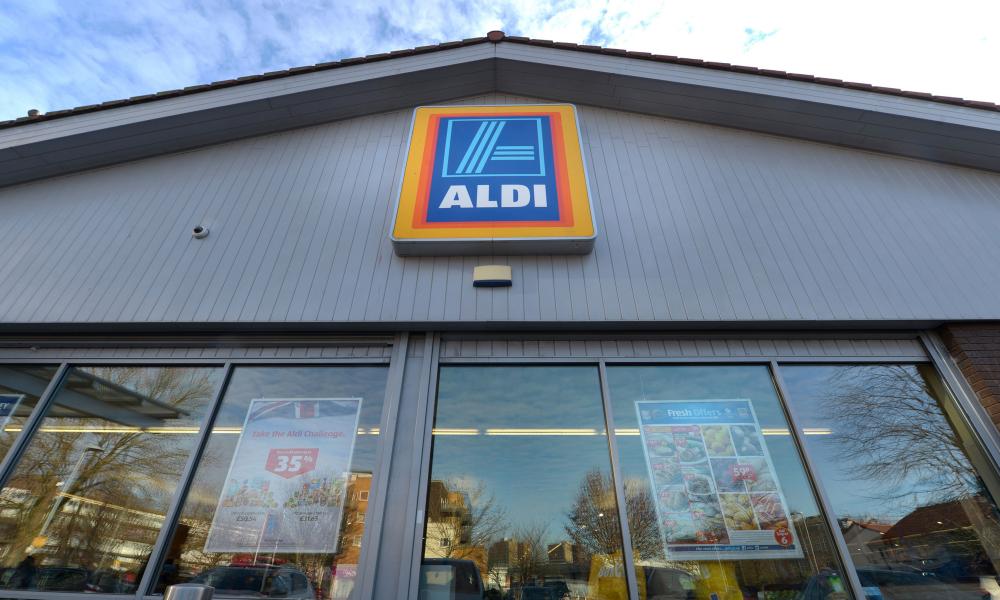 Store openings and bigger more beautiful premises helped Aldi leapfrog the more established Co-op to become Britain’s fifth largest supermarket. The German upstart, which opened its first UK store in 1990, increased its share of the grocery market from 5.6% to 6.2% in February, compared with the same 12-week period the previous year, according to the market research firm Kantar Worldpanel.

This trumped the 6% share controlled by the Co-op, which opened its first self-service store in 1942 and can trace its history back to 1844.

Aldi’s rise, along with its smaller rival Lidl, has been something of a phenomenon. Both have turned grocery shopping on its head by selling a limited range of lines. Aldi stores often stock just 1,500 lines compared with as many as 40,000 at the big four supermarkets, and 90% are own brand.

Customers pass through its tills 40% faster because it uses checkouts with longer conveyor belts that accommodate the entire contents of a trolley. The items also have bigger bar codes in three different positions, which are more likely to be captured first time when scanned. It is such attention to detail that is behind its success.

The Co-op’s market share also diminished because it sold 300 stores to the convenience chain McColl’s last year, and refocused on its own smaller convenience stores rather than bigger supermarkets.

This was also the year that Lidl overtook Waitrose to become the UK’s seventh biggest grocer. 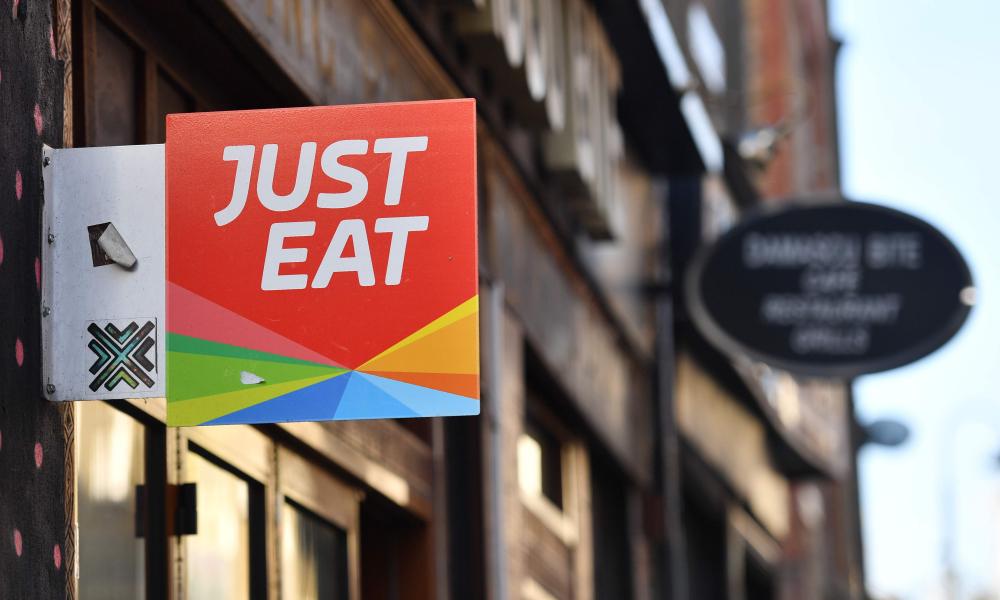 Still in the consumer space, the takeaway king Just Eat has caused some of Britain’s biggest grocers a bout of indigestion. The fast-food ordering website which makes no products and owns no outlets has now made it into the FTSE100 leading index of top companies.

It has gained its hefty valuation simply by creaming cash off orders placed with third party restaurants hosted on its website and apps. Just Eat is now worth £5.6bn compared with Sainsbury’s, which has 1,400 stores and sells 90,000 items and is valued at £5.1bn.

Just Eat has very little that differentiates it from rival online fast food consolidators other than scale and brand. It was founded in 2001 by five Danish entrepreneurs and has benefitted from Britons’ love of pizza, burgers and Chinese food. It now operates in 12 countries.

Greg Lawless, a retail analyst at broker Shore Capital, says time will tell if valuations of new digital disruptors will bear an abundance of fruit. “For now investors are happy to pay the premium for innovation and perhaps, a more agile business model, compared to more traditional legacy retailers,” he said. 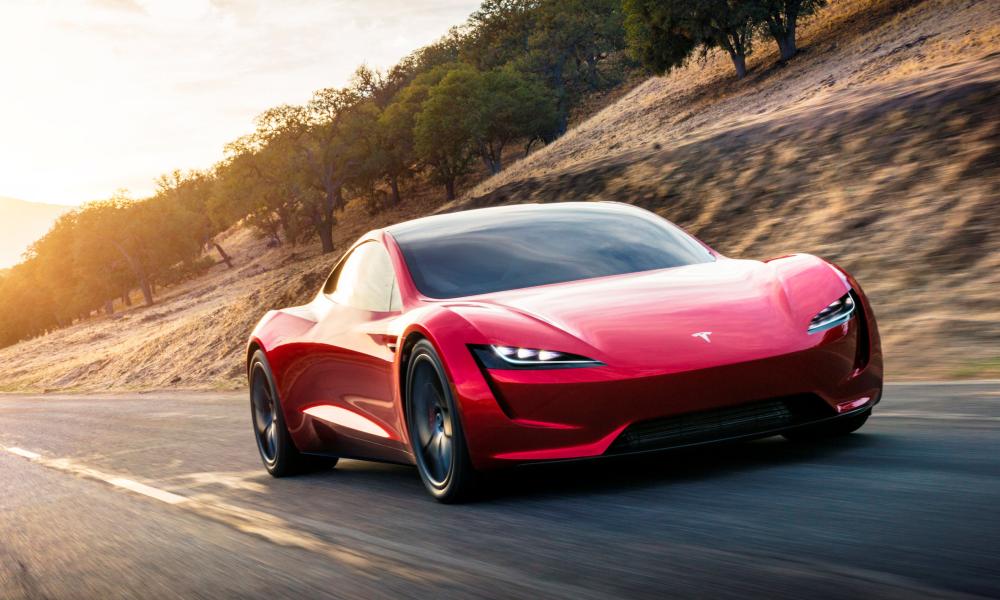 As the pioneer of the electric revolution shaking up the gas-guzzling world of cars, Tesla is the poster child for the disruptor movement. It has almost reinvented the automotive industry, leaving the established marques in its slipstream.

It is still less than 15 years old and has never made a profit, but the US car maker led by the former Paypal business magnate Elon Musk is now considered more valuable than the Ford Motor Company. This was probably the biggest upset outside the UK.

In April investors drove the share price up to £36.6bn just beyond Ford’s £34.3bn value. This was a seminal moment in the automotive world. It signified battery-powered cars coming of age. Most of its rivals are now playing catch-up with electric vehicles of their own, but Tesla is the standard bearer and market leader.

It has also coined a phrase. When a disruptor breaks through in another industry it is referred to as a “Tesla moment”.

Here again the valuation is based on hope. Ford has built more than 350m vehicles and has a proven track record. Tesla has a reputation for missing deadlines and targets and has delivered only 76,230 cars in the last year – nowhere near Ford’s 6.65m. Even a fatal crash involving one of its vehicles has failed to dent investor enthusiasm. 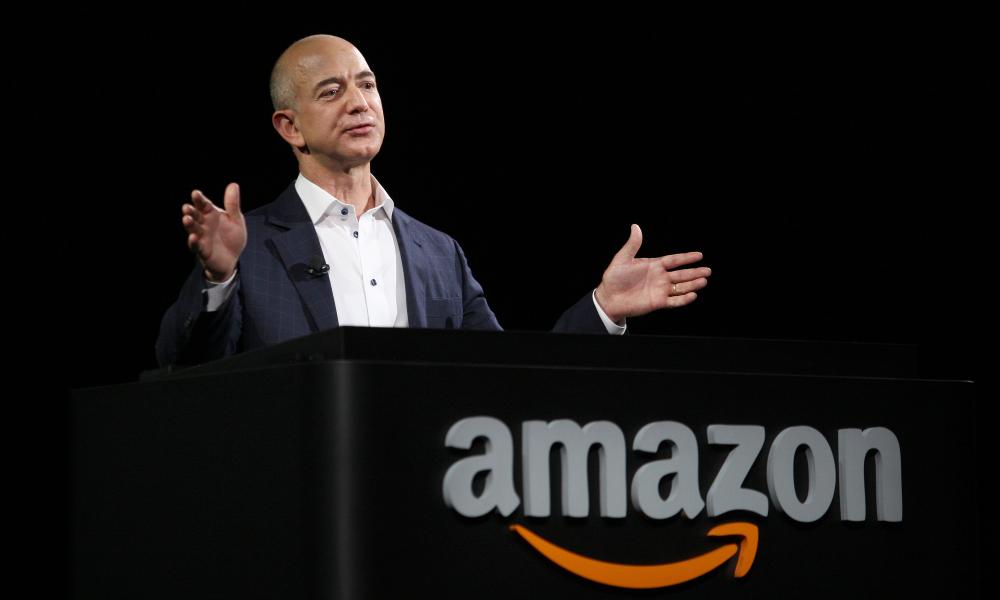 When it comes to billionaires Amazon’s CEO is cut from the same cloth as Tesla’s Musk and Microsoft’s Bill Gates. All have vision and steely determination.

It was only a matter of time before Bezos, who transformed the way we shop and made e-commerce acceptable, would trump Gates as the world’s richest man.

The 53-year-old magnate saw his fortune increase to £70bn in April, about £1bn more than the Microsoft billionaire.

The moment was brief, however, and related to Amazon’s share price rising by 2.5%. His wealth is linked to the company’s stock and his 17% stake has since slipped in value after Amazon posted a fall in quarterly profits.

This is less of a defining moment because the pair’s fortunes are likely to oscillate over the coming years, and the rise of an online retailer over a software giant is less meaningful in terms of disruptor trend.

That said Bezos’s rise from small beginnings, selling books from the garage of his Seattle home, is still remarkable. He had shown signs of genius at an even earlier ago, using a screwdriver to dismantle his cot as a four-year-old. Bezos the toddler felt the time had come to upgrade to a bed.

While studying in high school, Bezos also showed early foresight in proclaiming that “the future of mankind is not on this planet.” In 1994 he left his job at a hedge fund after reading about the boom in internet growth. He had drawn up a shortlist of 20 possible ventures and settled on books. Amazon was born. 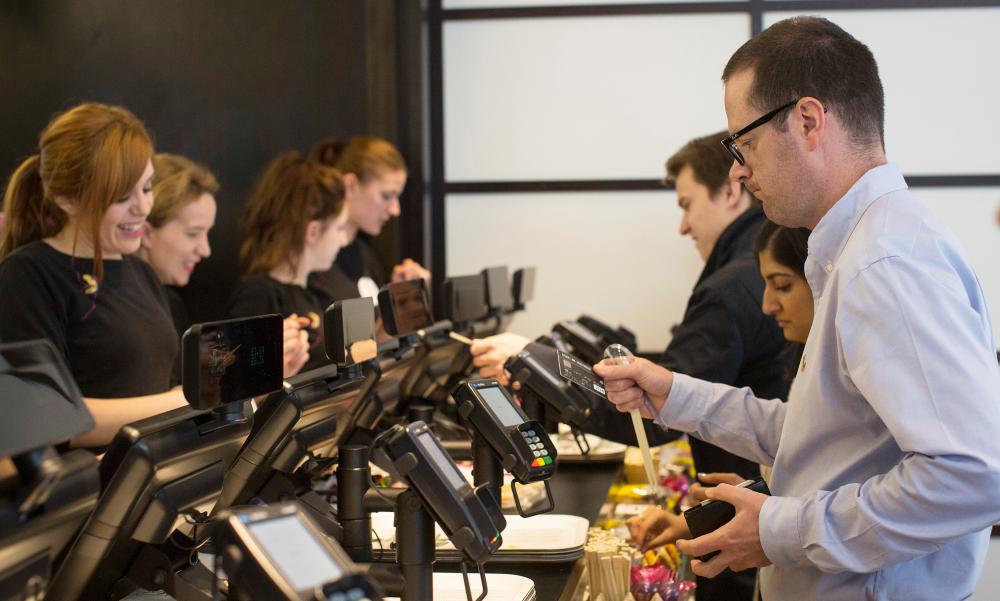 The value of transactions made using payment cards exceeded those in cash for the first-time last year, according to the British Retail Consortium.

Some may have mistakenly thought such a landmark had been reached some years ago, but smaller transactions paid with loose change always accumulated to swing the balance in favour of cash.

The innovation of using contactless, where you can wave your card in front of a payment machine without having to enter a pin, has however meant more people are using cards for buying lower value items. Contactless now accounts for a third of all card purchases, up from 10% in October 2015.

The introduction of lower transaction fees and handling charges also had an impact. Retailers are now more willing to invest in systems to accept card payments after reduced charges were forced through by the EU under its interchange fee regulation.

Cash has always been king, so this shift in balance is a significant moment. Anthony Wagerman, the chief executive of foreign exchange firm Travelex explains why he always had faith cash would prevail.

“I remember reading a couple of years ago in a journal – I think it was The Economist – that, as long as the beggar or busker on the street had an upturned hat in which passersby were dropping in notes and coins, you knew that cash was still here to stay,” he said.

“But just last week, a friend of mine told me he saw someone begging outside a shop. And in their right hand was a small portable chip and pin machine … ” 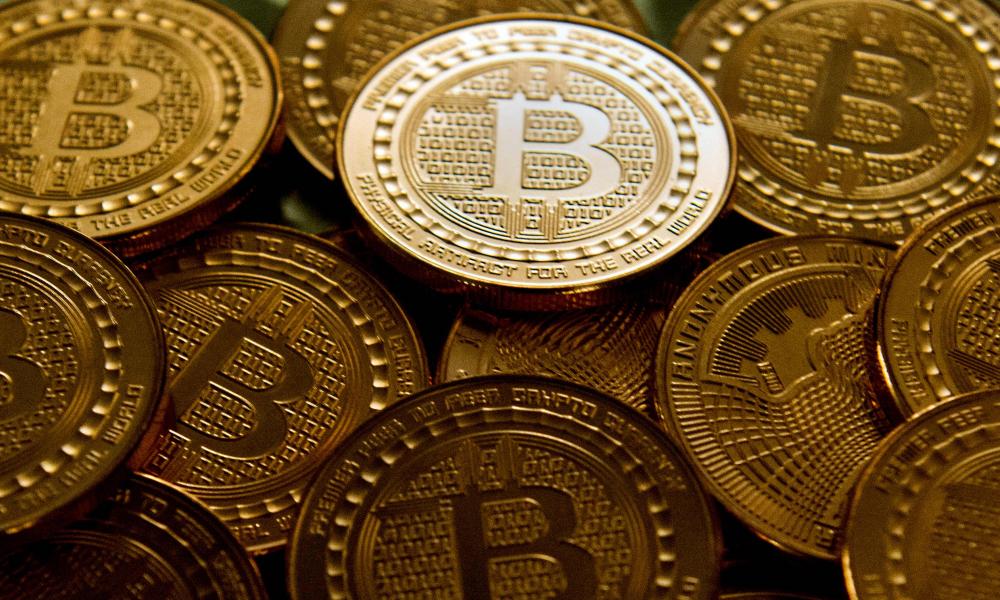 It’s the controversial digital currency that divides opinion over its legitimacy. Earlier this month bitcoin became the world’s sixth most valuable currency in circulation after soaring in value and overtaking sterling.

It is a mystery to many because bitcoin is created by computer code and cannot be touched or stored like notes or coins.

An anonymous techie using the alias Satoshi Nakamoto created the currency in 2009. Hugely volatile, it came to prominence in 2013 when its value soared by 10,000% before the price crashed.

Some believe it is a flash in the pan, but others think it is the next big thing. The only certainty is that there is no certainty when it comes to the future of bitcoin.

The cryptocurrency dwarfed more than half of the world’s currencies in terms of the value of banknotes and coins in circulation. The amount of sterling in circulation is worth £77bn.

This article titled “Year of the disruptors: bitcoin, Tesla and the slow demise of cash” was written by Rupert Steiner, for theguardian.com on Sunday 31st December 2017 12.25 UTC

2017 was a year marked by mini-upsets in the business world that, taken together, represented a changing of the old guard and a new establishment taking shape.

Technology fuelled a revolution which saw upstarts in retail, manufacturing and finance overtake long-established players. Whether it was payment cards or Bitcoin trumping cash or currencies, or the battery coming of age over the internal combustion engine, these were seminal moments.

PSFK has spotted a trend bubbling up at the juncture of exclusivity and community, where brands retailers are tapping into the ephemeral and the human with unique networks as a remaining way to differentiate and connect more deeply