Scores of companies are speculating on a world of electric cars and self-driving vehicles, prophesying the end of car ownership, prototyping autonomous transit pods and even drawing up new plans for gas station real estate. There’s good reason for it: Ridesharing startups like Uber and Lyft have shaken up urban transportation in the last few years, at the same time as residents and city leaders are confronted with the decay of public infrastructure, including the ailing New York City subway system.

That big data will occupy the defining role in the future of mobility is already evident at the startup Teralytics. Currently operating on three continents, the company harnesses vast amounts of telecommunications data for its projects for clients in the public and private sectors. The idea is to use these detailed insights on how people move to inform everything from multimillion-dollar public transit upgrades to late-night ridesharing prices.

“We believe that we can use data to build better cities, in a nutshell. What this means is that we can inform how we build our transportation, how we build our mobility services, using signal data we’re collecting from cell towers—the data being generated when your phone talks to a surrounding cell tower, even if it’s just lying on the table,” co-founder and CPO Georg Polzer, who grew Teralytics from a project at the University of Zurich, told PSFK.

“We use that data to understand where to build our new train lines, how to improve a subway system—how to make sure it’s less delayed than it currently is in New York—to understand how new ridesharing services are impacting the way we move around, and just help both public and private stakeholders to offer better mobility services or to regulate these mobility services better.” 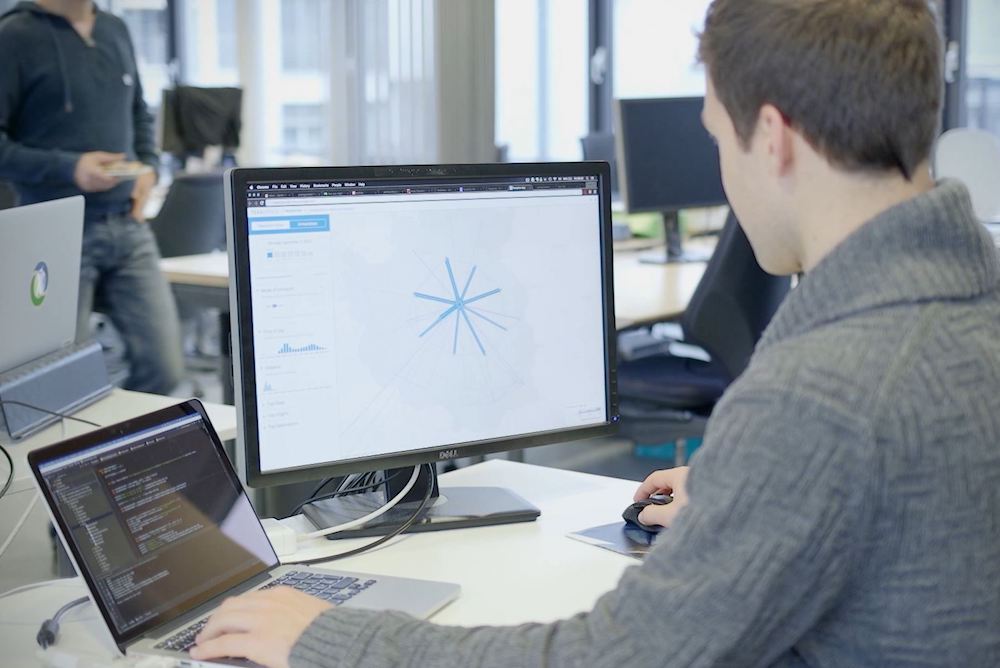 Polzer pulled up a map of Zurich to demonstrate Teralytics’ data visualizations with a timelapse. Beginning in the early morning hours of a weekday, stray blue marks traverse the city like comets, multiplying gradually until the massive boom of rush hour brings frenetic activity from all directions. Thick lines streak toward the city center, representing packed commuter trains. The thicker the line, Polzer explained, the larger the number of people represented.

Simply having a mobile phone—smart or otherwise—puts someone on the map, so the data extends across generations, income levels and ethnic groups. “The great thing about carrier data is that the sample is very even, because it’s always such a big sample of the population. You will always have a sufficient sample, even among the smaller subgroups of people,” Polzer said.

Teralytics algorithms also take steps for bias correction. In the U.S., for example, the company has partnered with just one of the big four telecom operators, so it extrapolates the data it collects based on the regional marketshare for any given area in order to reflect the total population. All of the telecommunications data is anonymized and unconnected to personal phone numbers or identities.

Teralytics’ offerings have major implications for public transit systems, which have thus far faced barriers in understanding the needs of the people using them due to limiting or out-of-date methods of collecting information. The metropolitan transit service in Singapore has undertaken an initiative to reduce the time it takes residents to reach the core train system from their homes to less than 10 minutes. Teralytics is assisting them with data that shows exactly where people begin their daily journeys and how long it takes them to reach a train, even by typically less discernible means like walking.

“They might know when you swipe your ticket—in Singapore they also swipe out, so they see when you enter and leave—but they don’t see what happens before you reach the subway. How cumbersome is it for you to reach a mobility service?” Polzer said.

With the Teralytics interface, a user can explore the data by changing the time frame or singling out a single mode of transport. These parameters reveal, for instance, that on a Monday morning around rush hour in June 2017, Uber had a 10% marketshare of all transportation in Williamsburg, Brooklyn. In the earliest morning hours of a Sunday, Uber’s marketshare jumped to 50% (presumably the consequence of a Saturday night out). User-friendly—and frequently mesmerizing—visual cues signify volume on the map, so a viewer can quickly determine that a red line of a certain thickness represents half a million people traveling from Brooklyn to Manhattan over the Manhattan bridge on a weekday commute. 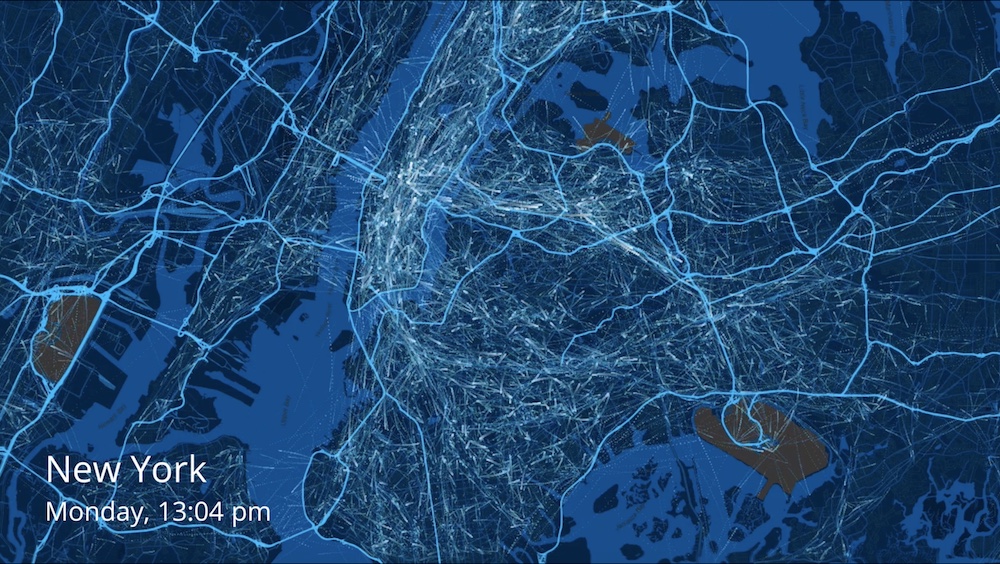 The most significant insights come from capturing this data over time. Canay Deniz, Teralytics’ managing director for North America, explained how the team is able to distinguish largely residential neighborhoods—where more phone activity occurs outside of typical office hours—from commercial ones. “We can basically see what are regular commutes, what are irregular events—like what happens during the holidays, for example, how much does this go down, how much does this increase—and we have this [data] for the entire United States,” he said.

That data could be used to back propositions for future infrastructure, such as where to place electric charging stations and extend transit lines. Teralytics is also working to improve responses to natural disasters by tracking how people move before, during and after, say, a major hurricane in order to identify neighborhoods where people need the most immediate assistance from relief groups.

For the private sector, Teralytics data provides a detailed and dynamic view of consumers’ shifting habits around vehicles—a crucial perspective as auto manufacturers start preparing for dwindling rates of car ownership with ride-on-demand and carsharing services (think Ford’s Chariot and Daimler AG’s car2go). As Polzer noted, “All the car manufacturers need to transform themselves from selling cars to selling driven kilometers. That’s the change. And they need data for that.”

Scores of companies are speculating on a world of electric cars and self-driving vehicles, prophesying the end of car ownership, prototyping autonomous transit pods and even drawing up new plans for gas station real estate. There’s good reason for it: Ridesharing startups like Uber and Lyft have shaken up urban transportation in the last few years, at the same time as residents and city leaders are confronted with the decay of public infrastructure, including the ailing New York City subway system.