1
Piers Fawkes is the founder and CEO of PSFK, leading retail & business intelligence platform, founder of Retail Innovation Week and co-founder of Wallkit. Piers is considered a trends and innovation expert and is called to provide talks around the topics of the reports that he and his team publish every month. He has provided hands-on advice to future-forward brands including Apple, Facebook, Google, Nike, Red Bull, Samsung and Target.

Adam Pritzker, founder and CEO of Assembled Brands, shares his insights on building consumer-focused brands before taking the stage at our CXI 2018 conference

Even if you don’t know the entrepreneur Adam Pritzker, chances are you have come under the sphere of his influence. After co-founding and growing the education center General Assembly—best known for its coding bootcamps at campuses around the world—Adam went on to start Assembled Brands, a holding company and retail “engine” that helps emerging, consumer-focused brands build their businesses.

Adam will be interviewed on stage PSFK’s CXI 2018 conference on May 18 in New York. Our founder and editor-in-chief Piers Fawkes caught up with him to chat about Assembled Brands and the future of luxury retail before he takes the stage.

Piers Fawkes: Adam, we're excited to have you on our stage on May 18. Maybe you can tell us a little bit of your story, particularly in terms of how you came to the new company that you founded, Assembled Brands.

Adam Pritzker: I was meeting people in the entrepreneurial community in New York and met up with a few people to start my first company, General Assembly.

That company started as a coworking space but became an education company, teaching skills in technology, business and design. It went from classes that were an hour, to workshops that were all day, to courses that were six weeks long. It started to place people into jobs and then launched the enterprise version of General Assembly, which is building small universities within Fortune 500 companies.

That company grew very quickly. We built about 20 campuses worldwide. We had about 700 employees and educated around 75,000 people. At that point I joked that I became a 75-year-old man. I stepped away from my operational role there and off to the board as chairman.

I wanted to focus on not so much digital companies but companies in which people were building physical products, whether it was soft lines or hard lines. I felt that the technology space was very well served and there were much smarter people, much more experienced people, who were serving that community.

I stepped aside to start my second company, which is a holding company called Assembled Brands. The thesis there was that there would be a proliferation of small niche brands that would start to take away market share from larger brands and that the places that those brands would be discovered would be on the internet, particularly on social media.

In terms of this proliferation of small brands, I felt that there wouldn't be the infrastructure—or the picks and shovels, as it were—to support entrepreneurs. I set out to build that infrastructure and stitch all the pieces together so that entrepreneurs could focus on building their product.

Are you a modern-day Procter & Gamble?

Procter & Gamble is certainly a company that we really admire. The way we went about building this holding company was first we incubated emerging and mobile-first brands for the modern consumer.

We built in-house distribution across online and offline channels. We built an in-house creative studio that can rapidly generate content for campaigns, video, editorial, e-commerce and social media. We built in-house financial planning and analysis capabilities so we can build inventory forecasts. We can benchmark metrics. We can score brands for underwriting.

Because we did this financial planning and analysis, we could start to underwrite these brands with credit investments that would allow brands to scale without giving away too much equity and would allow us to learn a lot about brands. 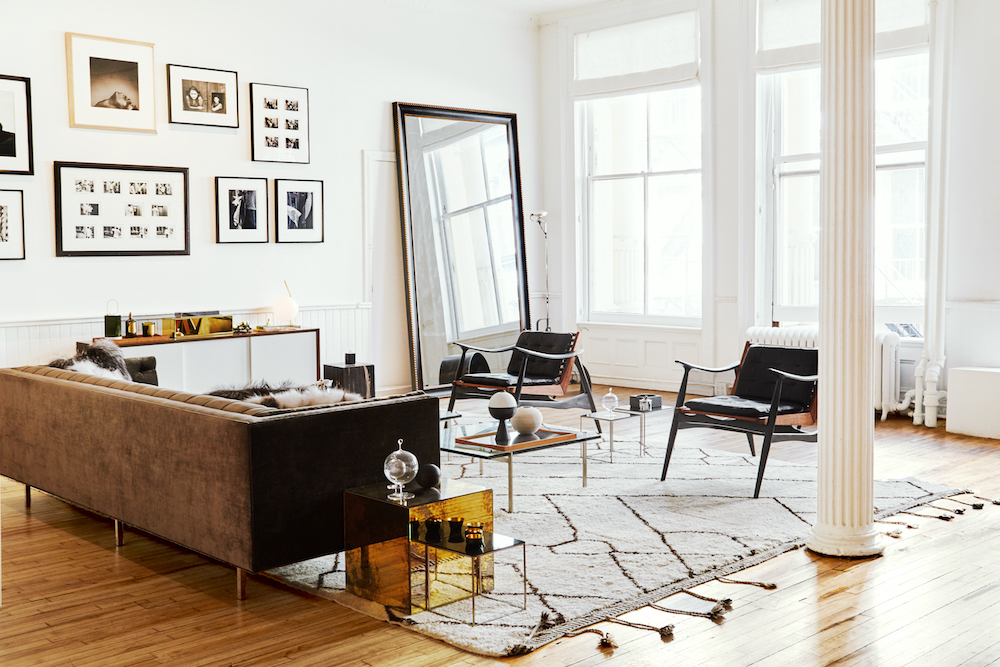 The Line, a curated retail approach supported by Assembled Brands.

My hope is that in that process we earn the respect of tastemakers and influencers through the brands we incubated and make it clear that we're not the Silicon Valley or Seattle service provider. That was the goal: to come from a place of operational capability.

In some respects, we're like Procter & Gamble but in other respects we're kind of like Y Combinator insofar as we offer the community and the tools to go build companies as opposed to making acquisitions.

I'm sure all your brands are your favorites, but is there a particular brand that we should look at as exemplary?

You're asking me to pick my favorite child.

Ha! I wonder whether there is one that is worth looking at because it reflects what you're trying to do holistically.

I would point to KHAITE. We built that brand from scratch. I think if you talked to the founder Catherine Holstein, what she would say is, “I was able to focus on actually designing the product with my team, and the structuring of the company, the financial planning and analysis, the content creation was taken off my plate so that I could focus on building my brand.”

One of the reasons building a brand is so hard today is because all the pieces required to build a brand are fragmented. If you think about distribution and you draw an X and Y axis, you've got online, offline, direct and wholesale.

That's a lot of different things to have to integrate, not to mention the expense. The idea was if we stitched together all of that infrastructure and we offered it as a service to brands, the more brands we put on that platform the more scale we would get. The better our network would be. The more we could empower those entrepreneurs to build their products and brands.

KHAITE is one successful example of how we've executed this game plan.

On May 18 you're going to speak at our CXI 2018 conference. What nuggets of inspiration or lessons do you think you'll be sharing from your vantage point?

Two things immediately come to mind. One is the increasing importance of creative talent in an age where lots of things are being automated. I still think creativity is incredibly important.

I guess the question is, “What is creativity?” When I think about it in the context of brands versus art, for example, I think of it as having a specific point of view that's consistently expressed across all touchpoints. That is precise and bold.

The ability to do that—I'm not sure can be replicated by a computer or automated. I think people are increasingly drawn to things that are human and creative. Again, these might be empowered by technology or amplified by technology but, at the end of the day, are deeply human in a certain way. That's the first thing I would point to.

The second, in terms of advice for creatives, I would say it's becoming really, really important, on the technology point, to be able to communicate with someone who's got a completely different brain than you.

Sometimes it feels, at least when I'm operating, that when creatives are trying to explain things to engineers it's like asking someone without a nose to smell a rose, and vice versa. The ability to be able to communicate with an engineer and vice versa, to be able to create something together. I think that's where the magic is.

If you draw a Venn diagram, and you've got design and you've got technology, that's where something magical can emerge. I didn't come up with this. I think it's probably most famously embodied by Apple.

Join Adam and other pioneering speakers for CXI 2018 on May 18 in New York City—details and tickets available here.

Even if you don’t know the entrepreneur Adam Pritzker, chances are you have come under the sphere of his influence. After co-founding and growing the education center General Assembly—best known for its coding bootcamps at campuses around the world—Adam went on to start Assembled Brands, a holding company and retail “engine” that helps emerging, consumer-focused brands build their businesses.

Adam will be interviewed on stage PSFK’s CXI 2018 conference on May 18 in New York. Our founder and editor-in-chief Piers Fawkes caught up with him to chat about Assembled Brands and the future of luxury retail before he takes the stage.