If you work in an office park, or study at a campus university, robotic delivery drivers could be coming your way, following the first-ever commercial deployment of the technology.

Starship Technologies, an autonomous delivery startup created in 2014 by two Skype co-founders, has been in public testing mode in 20 countries around the world since 2015. Now the company says it is ready for its first “major commercial rollout”.

Employees of finance developer Intuit in Mountain View, California, will be able to order breakfast, lunch and coffee from their staff cafeteria and have it delivered to any point in the company’s Silicon Valley campus by one of Starship’s 10kg six-wheeled autonomous robots.

“You place your order, it’s one click, then you drop a pin where you want the robot to meet you,” says Starship co-founder Janus Friis. “We’ve seen huge demand for breakfast. For some reason people just don’t want to wait – they want to go straight to work and avoid the queue in the early hours of the day.”

Starship is proposing campus expansion as a middle ground between its tests in urban areas, where the company’s robots have generally been accompanied by human handlers, and a full rollout across a city or suburb.

“A campus is just like a residential neighbourhood,” Friis says. “It’s pretty good for the early stages of the rollout, because they’re well laid out and well planned, so they work well for driving, and that’s why we’ve decided to launch and scale now.” 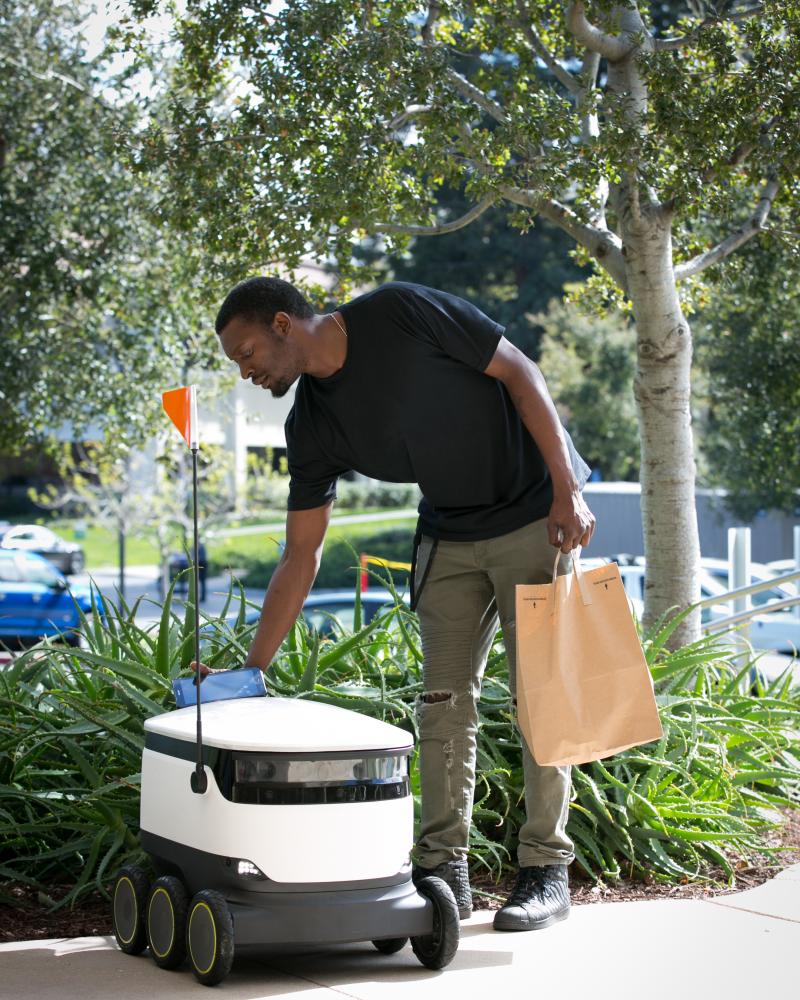 Starship is now on the lookout for other campuses across western Europe and the US where it can deploy the robots.

“We’ve reached the level of scale where we can deploy this widely,” says Ahti Heinla, says the company’s CEO and co-founder. “This is not just robots, there’s all sort of infrastructure around it that comes with it, you know: the service, the tools, the housing for the robots. We deliver them in pods that integrate them into the environment. So basically there’s a whole system with corporate and academic campuses that we’re starting to deploy.”

Separately, Friis says, Starship is trialling its city deployments in a suburb of Milton Keynes – the site of most of its activity in the UK – and will be launching another trial in San Jose, California, in a few weeks.

In the little over a year since the company made its world-first delivery – of lamb and falafel from a Turkish restaurant in London – it has amassed a global fleet of 150 robots carrying out daily drop-offs in eight cities in the US, UK, Estonia and Germany.

Thus far its deliveries have been mostly of food and parcels through corporate partnerships such as Just Eat, Domino’s Pizza, Hermes and Postmates in the US, though it launched a trial “plug and play” service for small businesses in Milton Keynes earlier this month.

The new commercial rollout in Silicon Valley will bring its delivery robots into contact with more people, and the company hopes these continued interactions will quell some concerns voiced about the rise of automation.

Heinla says most of the response from the public has been positive, contrasting Starship’s offering – squat, wheeled robots rolling along the pavements and co-existing with pedestrians – with “dystopian” efforts from companies such as Amazon and Google to introduce flying delivery drones.

“It would be a rather dystopian future to imagine thousands – tens of thousands – of buzzing drones delivering things to people in an urban environment: that’s not a nice future.

“But these quiet robots that just gently navigate the streets, and cause no inconvenience to people and deliver a great new service, it is – from the reception we get from people – it is a very positive thing.”