Interview: An AR App That Enhances How Fans Connect To Their Favorite Musicians

Keith Lawler, co-founder of Firstage, explains how his AR app provides a type of on-demand experience for music fans to enjoy live performances while simultaneously generating revenue for the artist

Streaming platforms have revolutionized the way people consume music—and likewise the way that musicians connect with their fans. One problem with the proliferation of on-demand availability of music, however, is a loss of profit for the artists, and less direct engagement with their followers.

Firstage is an augmented reality application that aims to solve these issues by providing an additional platform for artists to advertise their content as well as connect with those who love their work. For a podcast interview, founder and creative director of Firstage Keith Lawler spoke to PSFK founder Piers Fawkes about how his company is using the latest technology to give fans on-demand access to live performances while also supporting musicians, giving them additional opportunities to showcase their skills and integrating artists' content with product advertisement to better engage viewers.

Piers: What are the broader trends shaping the entertainment experience and business?

Keith Lawler:  It's clear that it's necessary for musicians and artists to perform live a lot more than they needed to before, particularly with streaming, which has basically flattened out the music industry. These days you can literally pick up any piece of music by any artist, at any time you want anywhere in the world, which is fantastic, but that takes some of the experience out of listening to music. So there's a great drive for live music experiences again, but than means artists need to be on the road a lot more, which can be difficult. We're seeing a lot of bands who may have retired starting to tour again—that's becoming a lot more popular now, and it also helps musicians make more money.

Streaming has had both positive and negative impacts on the industry. What other aspects of technology should we consider?

Artificial intelligence is probably a little bit further down the line, but there's interesting stuff happening in music composition using AI recording techniques. Virtual reality is the technology that did actually land, and is being used by venues, performers and by labels, because it's the one piece of technology that people actually do own right now. It has broken the consumer market, letting people put on their headsets at home and feel as if they're in a venue at a concert.

That's interesting, but I think there's still a lot of engagement lacking in those experiences. It does feel as if you need to go to that experience, you need to literally put your head into it by putting on the headsets, whereas augmented reality has the opportunity to bring those experiences into your physical environment, where you don't necessarily go into that isolated experience. That can be really exciting, and offers a lot more opportunities for entertainers and for artists to reach the people they want to reach.

How do you think artificial intelligence will impact the fan experience?

From the point of view of an artist, I'm fascinated with how artificial intelligence can actually write music, how it could almost finish pieces of music, and where it can take those strands of pieces of compositions and interact with them.  As far as the fan engagement with this, I haven't really thought about it that much to be honest.

Firstage is a company that creates augmented reality experiences in the music entertainment space. Perhaps you can tell me how that manifests and why you think it's an interesting offering.

We're an augmented reality concert app, so we put on live-streamed AR gigs that anyone can access anywhere they are.

We're also very concerned about giving artists the opportunity to play more gigs and make more money. It's a difficult time right now for the music industry—artists are struggling to make a sustainable living. Because of that, you start finding fewer people pursuing music as a career, and it remains more of a hobby. I'm worried that the quality of music will start to deteriorate over time because of that. What we wanted to do is give artists the opportunity to play in more gigs, because right now, the primary way an artist can make money is by playing live. They can only play one gig at a time right now, so it's not scalable, and it means that they physically have to go from city to city and country to country to reach their fans.

With our platform, the artist absolutely should still go on tour, and still play live, because that's what it's all about, but what we're enabling is for an artist to do an extra gig on a tour, and have that gig be streamed in AR. Fans who weren't able to make it to the venues can buy a ticket at a super low low cost to see their artist perform in an intimate setting. That's how we're doing it for live music, but we're also giving brands a big opportunity to get involved, letting them turn their brand into an actual stage.

Is the AR content live, or streamed as if it's live?

Both. Currently, the performances are pre‑recorded, but we are about to do the first ever live-streamed AR concert in June. Then, you'll be able to open up our app at a certain time. Live from Dublin, you'll be able to have the artist performing on your kitchen table in New York, if you like. That'll be the very first one, so hopefully will start to do more gigs as we open up studios in different countries.

We've built this, and now we're looking for artists who want to play some augmented reality shows and reach a wider audience, earning some more money by doing so.

Tell me about the brand experiences that you've been working on as well.

We've identified brands as a completely new distribution model for music. With major brands, their products are in so many hands and in so many places that they are almost impenetrable for a lot of artists. If you're an American artist, you have to be a certain size before your product is getting stacked in Asia and in certain places in Europe, whereas brands of that distribution already show up.

What we're doing is allowing brands to turn their products into stages. When our app sees certain products and recognizes it as such, it will then know that this is where, let's say, Ed Sheeran is performing his new single this weekend. For a brand, this adds a whole new value to its products. This means that people go out and buy that product over the competitors' products, not because they like the flavor of the drink, but perhaps because they prefer the band that's playing on this ad versus another.

So I go out and buy a can of my favorite pop, and through the Firstage app I look at the can and my favorite singer starts singing?

Yes, exactly. It's potentially exclusive experiences that you won't have heard before, or maybe it's brand new singles by artists that haven't been released. That's what we're doing with brands. We're also doing a lot of advertising, where you can turn a billboard into an actual stage where bands perform—in augmented reality of course. Holster's magazine articles are really cool. We're starting to do it with clothes. We did a test campaign a couple of months ago, where a certain brand had turned a magazine ad into a stage, so you could activate it, and there were artists performing on top of that actual magazine ad. 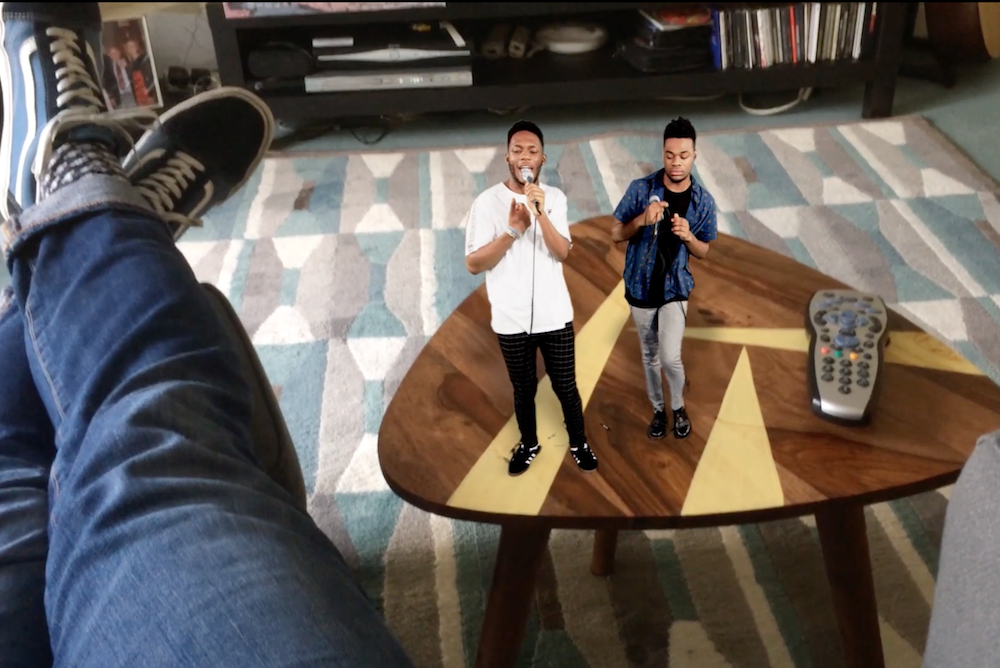 What we noticed is that people were spending 12 minutes on average staring at that ad, so you're advertising into hugely effective brand engagement tools. Most magazine ads have an average viewing time of about two seconds, probably less actually, and now when you can turn in into a compelling piece of content or a stage where people highly engaged.

Every ad is a stage. Keith, it has been great.

Providing fans on-demand access and exclusive content while also generating additional revenue for artists showcases the potential that technologies like augmented reality possess to revolutionize the music industry as well as enhance the fan experience. For more from Keith, see PSFK's podcast.