Teenagers have abandoned Facebook in favour of other social media platforms such as Snapchat and Instagram, according to a study from the Pew Research Center.

Just 51% of US individuals aged 13 to 17 say they use Facebook – a dramatic plunge from the 71% who said they used the social network in Pew’s previous study in 2015, when it was the dominant online platform.

In this year’s study reported Facebook use was, according to Pew, “notably lower” than the percentage of teens who said they used YouTube (85%), Instagram (72%) or Snapchat (69%). In the previous study, just 52% of teens said they used Instagram, while 41% said they used Snapchat. YouTube was not included in the 2014-2015 survey.

Use of Facebook was markedly higher among lower-income teens, with 70% of those living in households earning less than $30,000 a year using the platform, compared with just 36% of those whose annual family income is $75,000 or more.

“Again, lower-income teens are far more likely than those from higher income households to say Facebook is the online platform they use most often (22% v 4%),” states the report, titled Teens, Social Media & Technology 2018. 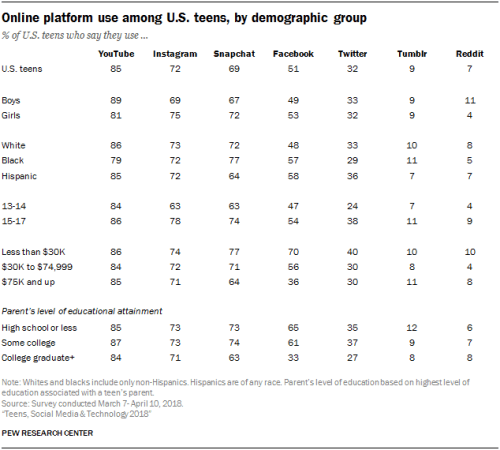 A breakdown of use by demographic group. Photograph: Pew Research Center

This is not the first study to indicate that teens are leaving Facebook. In February this year, an eMarketer study estimated that Facebook’s user base among Americans aged 12-17 declined by 9.9% in 2017 – almost three times greater than the same research firm had predicted in August of 2017. The company predicted that Facebook would lose a further 2.1 million American users under the age of 25 this year.

“This is something we have observed anecdotally for a long time,” said the eMarketer analyst Paul Verna, who said his own daughters – aged 17 and 14 – are the perfect representative case study.

“When the 17-year-old turned 13, getting a Facebook account was a rite of passage. Not long after she got the account she realised she didn’t have much use for it. When the younger one turned 13 she didn’t even lobby for a Facebook account. It was all about Instagram for her and still is,” he said.

“It’s a big plus that Facebook owns Instagram, but this is a problem for their flagship brand and platform that they really need to sink their teeth into.”

Teens are highly prized by social platforms for a number of reasons: people tend to take their habits with them as they age, they give platforms the “cool factor” and attract advertisers.

In Verna’s view, this demographic shift is a “greater existential threat” to Facebook than the privacy concerns to have emerged following the Cambridge Analytics scandal.

Other findings in this year’s Pew study include the fact that 95% of teens now say they have access to a smartphone – up from 73% in the 2015 survey. Some 45% of teens say they use the internet “almost constantly”, around twice as many as the 24% who said this in 2015.

Lead Image: The number of US teens who say they use Facebook has fallen from 71% to 51%. Photograph: SolStock/Getty Images