The Playroom from Fatherly is the online parenting and lifestyle publication's first major experiential consumer activation, taking the form of a playful and shoppable family popup designed to drive engagement and product sales in a more authentic way

Fatherly is a multimedia brand dedicated to creating content to support the contemporary millennial man, with a focus on parenting from the male perspective. This holiday season, the publication decided to stage a pop-up experience for the whole family in New York City. Though there are products for sale, via a partnership with Amazon that imbues each item with a QR code that leads visitors to the ecommerce page, the space is designed to encourage play, rather than purchasing. Fatherly hopes that the experience will help naturally inspire families to purchase, while providing valuable product feedback to brand partners like Lego and LittleBits from real parent and child consumers.

In an interview for our podcast, PSFK spoke to CEO, Michael Rothman, about Fatherly's particular blend of content and commerce and how his pop-up activation may be the solution for driving brand engagement and product sales in a more authentic, experiential way. 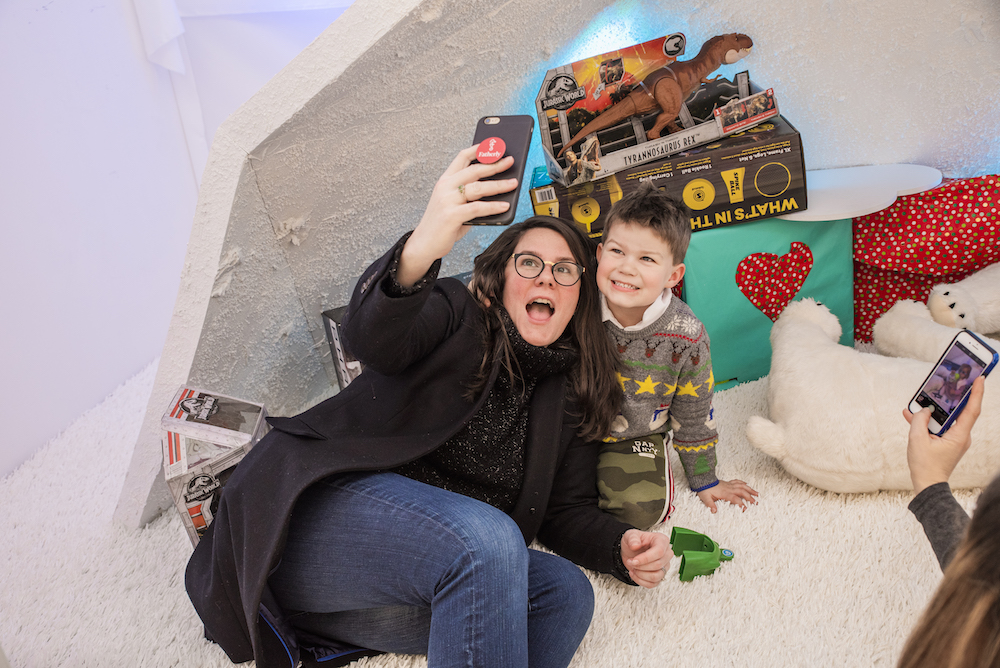 PSFK: Could you walk us through the Playroom concept?

Michael Rothman: The Playroom from Fatherly is the first major experiential consumer activation that we've had. It's a platform for showcasing the 100 best toys of 2018, a big editorial franchise of ours. It's one thing to write about toys; it's another thing to actually have them out on shelves and on the ground where kids can play with them.

This is also, as an experiential platform, an opportunity to showcase the best local activities providers in New York for kids—everything from puppetry classes and dancing lessons for kids, to baby yoga and book readings. It's a really exceptional way to bring Fatherly to life.

How does The Playroom compare to other experiential popup activations that we're seeing so much of right now?

LEGO has this whole activation where you get to basically create your own LEGO. There's just piles and piles of LEGOs, along with LEGO experts to help you design whatever you want to make. LittleBits has a whole bunch of STEM workshops.

That's what makes this particularly special. It's free to the public. We're not aggressively hawking these products. We're really just showing them and allowing kids to spend however much time they want playing with the toys. 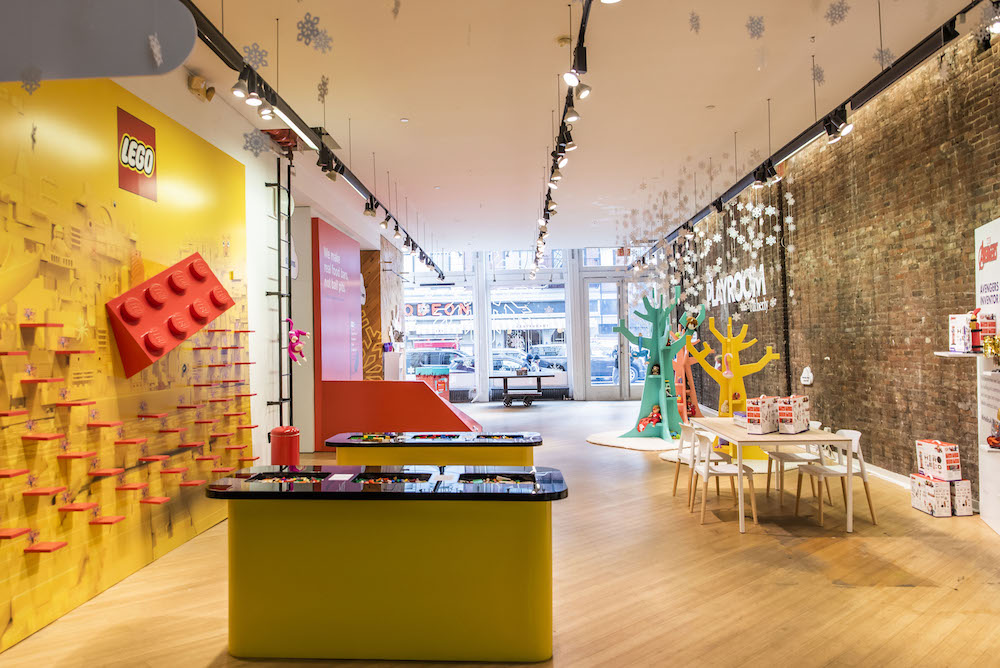 Could you describe what the experience is like for the whole family?

Well, first we have concierge stroller parking, which is important, especially when you have a hundred kids and kids of this age. We have strolling parking outside and inside. It's the new type of valet.

Then, as soon as you walk into the space, the theme is more like a winter wonderland. We have all of these designs that look like trees, where the branches are holding different types of toys, different types of dolls for boys, girls, whomever. Then we have a play space, which is also a parents' lounge on one side where parents could hang out, but it's also where we hold concerts and all the actual hands‑on activations for kids.

Then there's the toy cave in the back, which is a bit more sequestered from the activity experiences, where you can actually see all of the toys are there on display. The kids can spend however much time they want on the floor, just engaging in imaginative play or playing with their friends.

Then we have coffee, hot cocoa, for parents and a lot of fun kids‑themed Christmas and holiday music throughout. 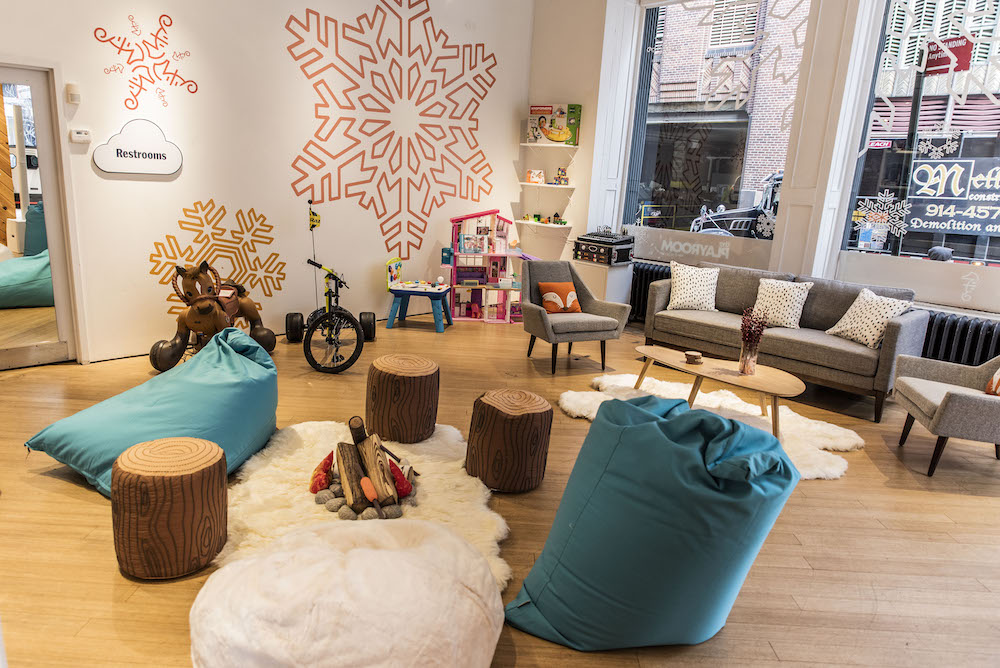 You mentioned that purchases are not top of mind, but is there any transactional element involved?

There are QR codes on all the placards, which link back. We have a store on Amazon. They're our affiliated partner.

I was actually just getting a text from some friends who brought their kids as a birthday party to the playroom. She said that all of the parents last night were going and buying all the toys, again, to placate the kids.

I think the kids thought they could just simply walk out of the playroom with the toys, which might be their experience at toy stores of yore, where you cry loudly enough in the toy aisle and the only way to leave is with the toy that you were crying with.

That's ultimately how we're going to track whether we're driving direct sales, but we're really not pushing it through any signage. There's just a very subtle reminder that, assuming that this audience has the Amazon app, they can either use the QR code directly, or they can just go to the 100 Best Toys list and buy directly through the site, which will link back to our Amazon affiliate.

Could you describe what Fatherly stands for as a lifestyle brand, and how that is complemented by this pop‑up?

We established this as our mission statement about a year and a half ago, and it really does hold up. It's to help empower men, and parents generally, to raise great kids and lead more fulfilling adult lives, which really speaks to the dual purpose of Fatherly, which is helping you as someone who's now a parent, or someone who has been a parent, with the day‑to‑day responsibilities of all that entails.

It also addresses the broader, more existential questions of how to raise a kid with good, moral fiber, who makes the right decisions on their own as an adult. Also, the other part of it is leading more fulfilling adult lives, making sure that we're also handling the relationships that you as an adult have with yourself, your friends, your own parents.

It's a next‑generation men's lifestyle publication, as much as it is a parenting publication. One of the questions that we've heard repeatedly from our audience is, “There's always a lack of things to do on the weekend,” or “I'm challenged with finding things to do on the weekend with my kid.” That's made especially more difficult in the wintertime, again, because there's really a lack of public spaces. It's not as much fun to play in parks when it's 20 degrees outside, and you don't want to just bring your kid from store to store.

We wanted to solve, fundamentally, the challenge of “What should I do with my kid this weekend?” We wanted to take this experience of these toys, which solve another real need that our audience has, fulfilling their holiday wish lists, and allow their children to see if these toys pass the sniff test or the play test.

[It was] a four‑day event. I think this is something that we'll absolutely do, not just again next year in New York, but ultimately take to other cities around the country. 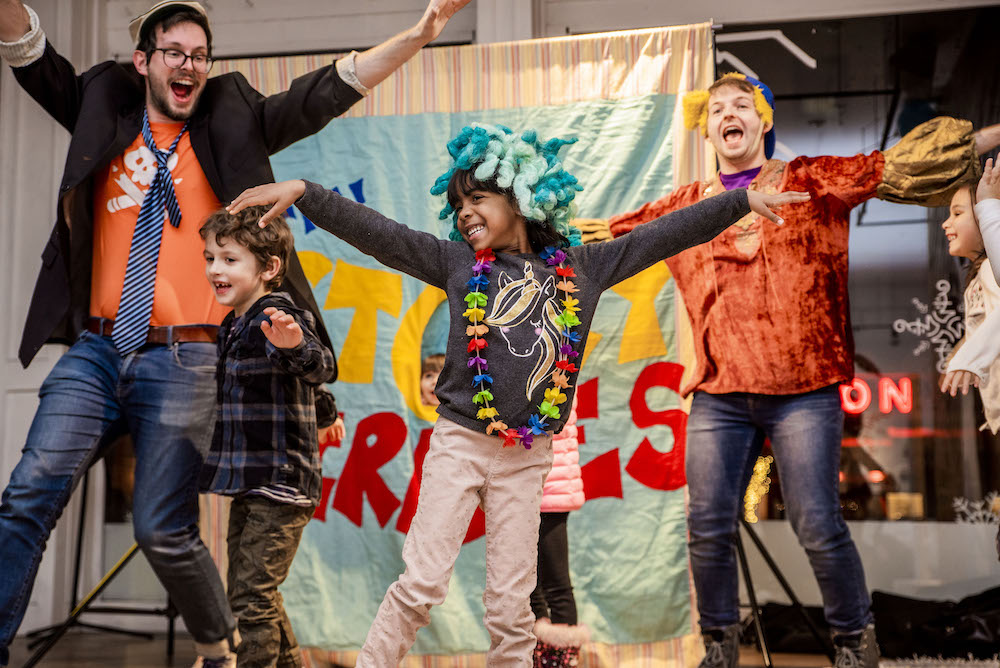 In my experience, previously running the business function at Thrillist, at one point we were doing maybe 40 events a year. I think there was an existential question that we had at one point. “Are we in an events company? We're putting a lot of energy towards that.”

I think in the same vein that we're solving challenges for parents, and whatever that may entail, we also need to solve challenges for marketers, foundation partners or even governments who are trying to connect with and influence this particular audience of men and parents that we have. The primary way in which we do that is through content, because we're still a content‑first company, but that ultimately evolves.

If you're able to influence someone through their phone, through their desktop device, or through our audio podcasts, you want to see what it's like to influence this person in the real world. There's something very visceral, again, seeing this yesterday of just the delight on kids' faces, the joy that parents have of, “Oh, this is amazing. I've been looking for something to do for my kid.”

There's something very real and very tangible for us as content creators, but also for the partners that we work with, to see their products in the real world. There's tremendous R&D benefit that comes from that.

Even to have some of our more junior employees, who may not be parents themselves, engage directly with parents is incredibly beneficial for developing greater empathy with who we're talking to, even just talking to them about, “What's a challenge in your life, and how can we, as Fatherly, if you're a fan, be better? And if you're not familiar with us, how can we incorporate ourselves as part of your daily habits?”

This benefits the toy companies, too, to see their products come to life.

The ambassadors there really get to see what it's like. There's tremendous product‑design benefits to see, “Kids tend to kick this toy, as opposed to play with it or roll it around in their hands, which is the intended design.” Granted, they've done this type of R&D before, while developing the product, but to see it rolled out, especially if it's a new product, is incredibly helpful for the next year's iteration.

We're seeing that now, especially with all the LEGO brand ambassadors and the LittleBits brand ambassadors, to see not just how the kids are reacting, but how the parents are reacting to the kids, and how the parents are reacting to the displays themselves. This little microscopic experience could help inform retail point of sale expressions of their product. There's just a lot of benefit, outside of a sampling opportunity that reaches several thousand people.

You mentioned that the primary node of measurement was through the QR codes. Could explain the metrics that you use, and how you gauge success?

There are a couple different metrics that we're using. I'd say we're probably putting more emphasis on the qualitative and just getting anecdotal feedback from those that are coming in the door. Are they getting an incredible experience? Are they coming back? Even though this a four‑day pop‑up, are they coming back multiple times?

That means we've created something of real value for their lives. Then, in terms of the quantitative stuff, just measuring foot traffic, the efficiency of how well we're able to fill the space over the hours that we have, how well our marketing is converting. We're working with deploying our own marketing, email marketing. There's a prominent presence for the Playroom on the site, so actually seeing how that translates into actual feet in the space.

Then from a business perspective, how template-izable is everything that we're building here? Everything from the actual display units, is there a way to reuse those easily and pack and fold those easily so we can do this again but much more efficiently the next time around? Even the partners that we're working with, how does that scale? We're using a partner called Sawyer, who serves as a backend for a lot of the children's play providers around the city. It's like CRM for these boutique‑fitness companies. Sawyer does that for these kids' activity providers.

We work with Sawyer to help activate the 30 different local partners that we're working with as opposed to having our team going out and making 30 different phone calls. We're doing that, but having a partner like Sawyer is helpful, particularly because they also have a presence in probably 10 other markets.

Finally, we look at earned media, so we've had a couple really good write‑ups. “The New York Times” did a blurb. “Inc.” did a feature. There are a whole bunch of “influencers” who are coming.

Fatherly is driving engagement by complementing its online resources with real-life, dynamic activations, marrying its content with commerce through enjoyable and shoppable experience. For more from similar inspiring brands, see PSFK's reports and newsletters.