In the wake of #MeToo activism, Girlboss founder and former Nasty Gal CEO, Sophia Amoruso, is taking her efforts in supporting women's success to the next level with a new professional community

Sophia Amoruso is the founder and CEO of Girlboss, an organization dedicated to providing support for women at all stages of their careers, with everything from wellness resources to financial advice. She got her start as the founder of online retailer Nasty Gal, which rode the wave of early millennial-oriented ecommerce to great success until its very public bankruptcy filing and acquisition by BooHoo Group in 2017. Along the way, Amoruso collected her wisdom gleaned as leader of what was once one of the internet's fastest growing retailers into #Girlboss, an autobiography offering advice to other ambitious young women.

Since stepping down as CEO of Nasty Gal, Amoruso has dedicated herself to building Girlboss, creating an annual Girlboss Rally, online content, a podcast, and a recently announced private networking platform for professional women. Launching in 2019, Amoruso hopes the Girlboss community can help provide women with the resources that platforms like LinkedIn have not, filling a niche in a time of rapid social change.

This year's New York rally welcomed 1,100 women from 31 different countries over two days of programming. PSFK spoke to Amoruso following the event for an inside look at how she is using her past experience to build a community of women supporting women across industries and at all levels of achievement. 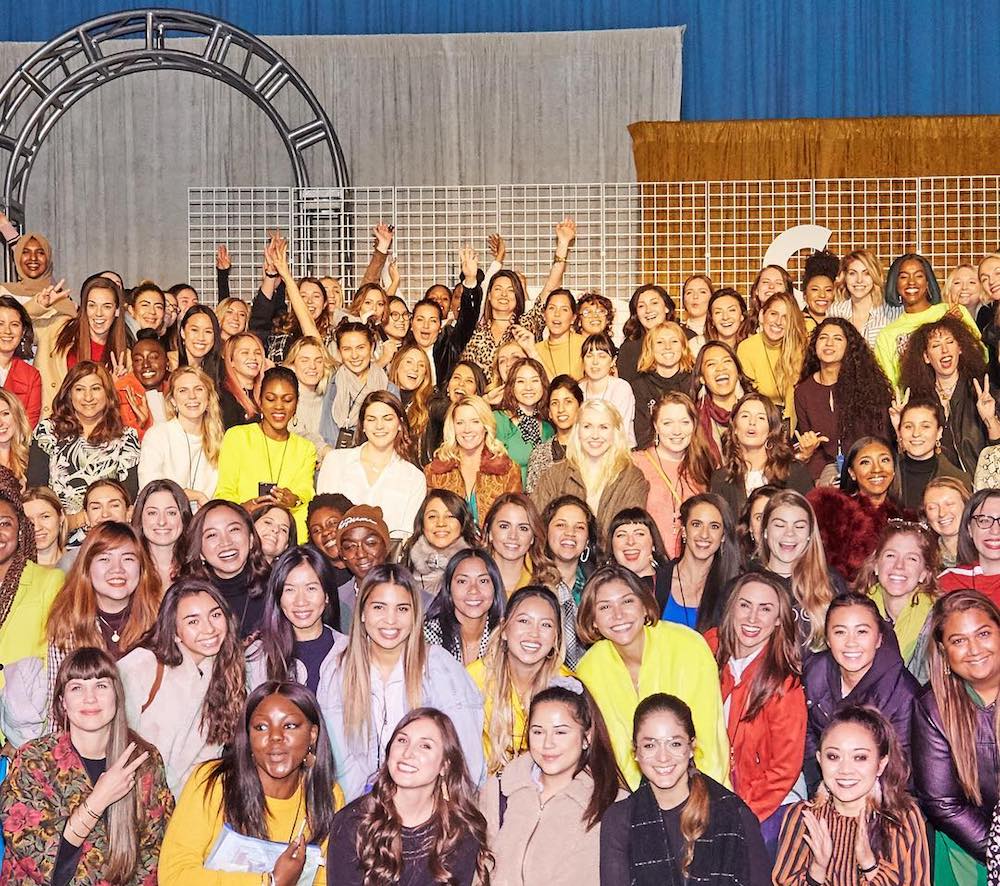 PSFK: You’re about a year into running the Girlboss platform?

Sophia Amoruso:  It's actually two years. Our first rally was in March of 2017—this is our fourth. We've also been creating content on girlboss.com, and our podcast network.

Then there's the product I announced yesterday in terms of bringing the community and this feeling and all this content on to a single platform—we're in beta. It's a closed early environment where we have women and they're using it, but it's not fully baked. What we shared [at the Girlboss Rally] was an iteration of it that will be completely built the next few months.

What do you feel, in the time that you've had the platform, that you've learned about your community?

What was really the basis of it was this Facebook group, called the Girlboss Gang, that we've been watching for a year. They're asking questions like, “I have three logos. Can you guys help me choose one?” “I have a website that's not converting. Can you click through and tell me where you're getting hung up?”

Or, “I'm going to Austin. I need WiFi and an outlet to work for the day. Where can I do that for free? Do you guys know?” Then stuff like, “I'm having a really hard day. I need some words of support.”

It really runs the gamut. The general theme is that they're entrepreneurial, whether they're in a career or they're building a career. We have women from Uber, Google, Heineken, women who are really in these incredible positions in their companies. There are entrepreneurs, but there are intrapreneurs. We have these women who're actually building businesses.

Then there's everything in between, where they may have a career, but they have a side hustle—they don't know if they're ready to make it their full time, or face fear about doing so.

What do you think is the key to engagement and getting these women to start to have these conversations on the platform?

It's going to be built woman by woman, or relationship by relationship, individually. I don't think this is something that we can really broadcast because it wouldn't be as authentic as the way the community has already grown. The hashtag has been used 13 million times. That's not because of us on Instagram. That's something they did.

In many ways, the Girlboss community has built itself. We're just showing up now four and a half years a later saying, “Hey, we're going to give you a place to do this.” We started with Girlboss Rally and we're taking that online, and creating an environment where it can happen all day every day. 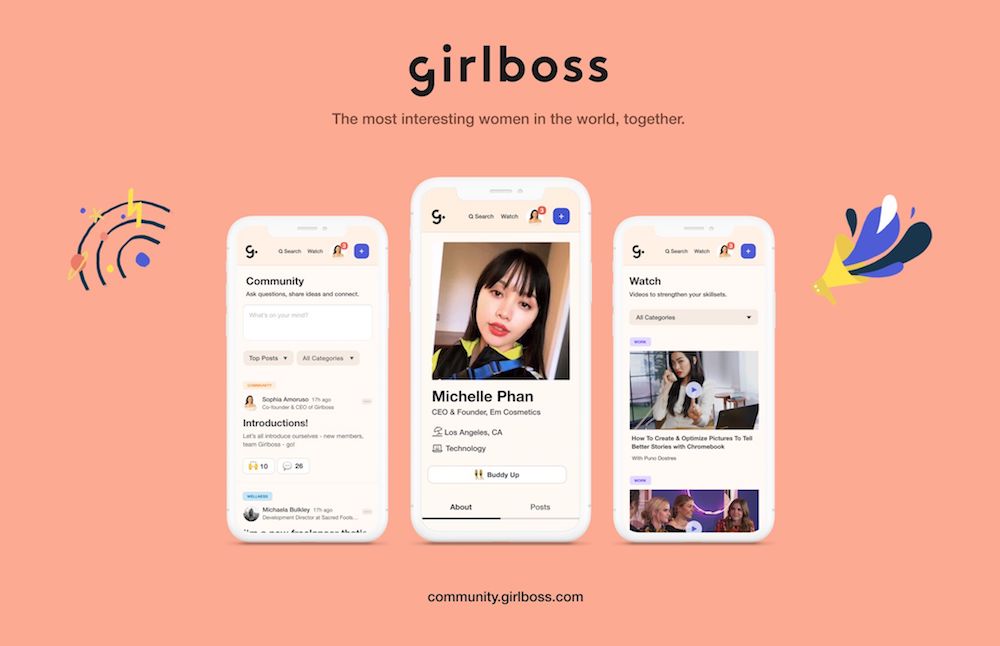 Have you seen the conversation change since you first launched?

I'd say identity and activism have become a part of the conversation where they weren't when I wrote Girlboss, because we were in a very different time. I took feminism for granted because I was in my bubble and I thought everyone was already there.

I also had the privilege of only having been in companies that I invented or created rather than being in a corporate environment with the kinds of things that we've seen come to light.

It seems that community is at the core of what you're building. Could you explain how that's manifesting through Girlboss, and why also it's important to create offline experiences?

We just want to be the conduit for something that already exists. Girlboss is part of it, but it's a much, much larger conversation that we're part of. Experiences are a way for people to have a sense of discovery that we want to replicate online, but I don't think it's been done very well. Especially when it comes to professional networking or professional resources.

Where you Google something, you might end up on WikiHow or a YouTube video of somebody who's giving you advice to start a business who's probably never started a business.

Having that level of credibility when you can see people's faces is really powerful. The way we curate such a diverse group of women on our panels who are seasoned executives to women who are just starting their businesses is important, because our women are at different stages in their careers.

Just highlighting people who have had a long‑storied career—there's a lot of inspiration there and a rich experience that women who've been in the workforce for 20-plus years can share, as well as the businesses that are innovating and marketing in new ways. I'm inspired by it because five years ago when I was building Nasty Gal, marketing was different. It's changed so quickly. 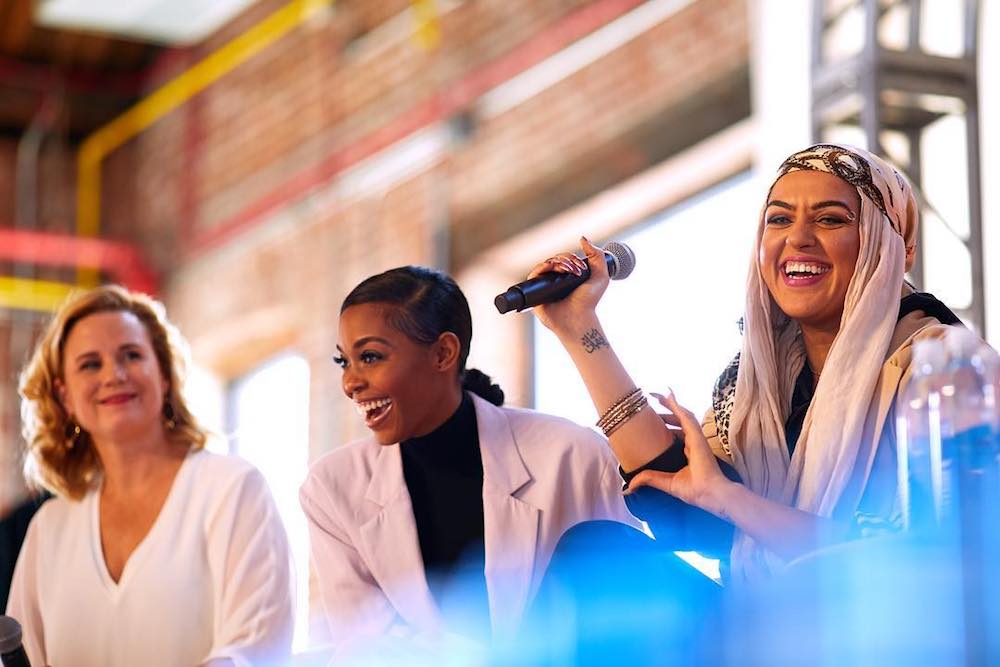 It's a completely different game now. How do you feel like you're empowering women to participate in your community ? How does their feedback inform what you're developing?

At the beginning of each day, I asked everybody to turn to one another, introduce themselves and exchange either business cards or email addresses. Often you just introduce yourself to someone, maybe you see them later in the day but you don't have the confidence to ask them to stay in touch. Each one of those relationships creates opportunity. If I hadn't said yes to so many things over the first 10 years of my career, I'd be in a really different place. Who knew that a book would turn into a second career? What else would I be doing right now? Consulting for fashion companies?

In terms of encouraging interaction, we have the conversation pitch. It happens naturally because that's what people came to do. I opened up yesterday saying, “At some point in your career, have you thought networking is kind of creepy?” Because I have. That word can be kind of creepy.

Then I asked, “How many of you came here to network?” Everybody raised their hands. What is the stigma around networking? Is it that we want something from one another? Is it that we have to admit that it's awkward? What is it? We want to create a place where it's expected, it's mandatory.

They're here to take action. With one another, with themselves personally. There are notebooks out, not phones. These girls are soaking it all up and they want to go home and immediately implement what they learned.

Have you noticed any ideas or themes at this particular rally that are new?

Wellness is the theme. The Museum of Ice Cream founder, Maryellis Bunn, was here yesterday. They're banning phones from their experiences. That's a huge risk to their business because that's been all of their marketing—inherently shareable.

What these devices are doing to us and our memory, how much time we spend on them, how they affect our mental health—it has become evident that there's a negative impact on us. Bumble introduced a news function. and the new iOS can babysit your time.

The dopamine rush that this created, companies are now trying to help us solve. Arianna Huffington came on stage yesterday and told us about the sleep revolution that she's created and everything they're doing at Thrive Global. She's really done the grind. The glory of the hustle is over‑glorified.

I was partly responsible years ago in propagating that. It's something I'm a lot more careful about evangelizing, even though it's important at times. It's a question of how do you make sure you're also taking care of yourself? That integration is now essential. That's what we're doing with the Girlboss community.

It's a place where you can share not just what you do, but who you are, your personality. Monday through Friday we’re a professional networking platform and on weekends we're sharing our fun drinking adventures. We're living all of those together all the time.

What would say are the most significant signs of progress based on the female empowerment community?

The KPIs we want to tackle: Are these women making more money? Are they making one another richer? How can we facilitate that? Are they negotiating more? Are they starting more businesses as a result of being a part of the Girlboss community? That's what we want to build this around more than revenue metrics or daily active user metrics.

Of course, we want people using the platform. The most important thing is that they're deriving value from it.

Is there anything else that we can expect coming down the pipe that you would like to share?

Bigger and better rallies. So much substance comes out of these two days. It's a lot of work, but it's easy for us because women are so underserved.

One final comment: You've been incredibly honest in a lot of the interviews and information that's out there about you, which really breaks down that barrier so that women can actually start talk honestly and openly.

Thanks. I could have gone into hiding, but everything was already headline news. I might as well turn lemons into lemonade. Nothing is really ever a lemon. It's all an opportunity to learn.

For more interviews from inspiring leaders like Sophia who are building communities for a better future, see PSFK’s reports and newsletters.