This holiday season, fans of tex-mex chain Taco Bell will be able to purchase branded gift wrap exclusively on Amazon Canada, part of the restaurant's efforts to maintain its reputation for fun and out-of-the-box activations

Taco Bell occupies a unique spot within the quick-service restaurant (QSR) space. With a menu different from its many burger-slinging competitors, its tex-mex offerings have built up a somewhat cult-like following. To celebrate the holidays this year, the chain offers its dedicated fanbase an opportunity to purchase and share some unique merchandise. Launching on Cyber Monday, Taco Bell offers CrunchWrap-themed gift wrap exclusively to Canadian customers via Amazon. The set of “Crunchwrapping Paper” features images of individual Taco Bell ingredients, which can be layered and customized as the gift-giver chooses.

Though it may seem like just a holiday gimmick, Taco Bell's appeal is driving real sales of its merchandise. Since its release on Cyber Monday this year, the product has been steadily climbing the list of bestselling gift wrap items on Amazon.ca.  PSFK spoke with Jacquie Kostuk, Lead Social Strategist for Taco Bell Canada's agency Grip Limited, about how the fast food brand is taking cues from meme culture and streetwear to help tap into its cult following among millennials and Gen Z.

PSFK:  The CrunchWrapping paper is being sold on Amazon as a limited holiday promotion. What does this activation offer to your customers?

Jacquie Kostuk: It's one of the biggest things for Taco Bell. We know in Canada, it's a bit of a smaller, challenger brand [in the QSR space]. What we've learned from our communities out there is that they're highly passionate, but they don't necessarily like being sold to directly, which is an offshoot of them being Gen Z and millennial.

It's giving them a digitally active brand experience that anyone can get a hold of without needing to have some physical, experiential event.

What consumers are you trying to reach with this activation? Is this millennial‑focused, or is it more Gen Z?

It's the youngest segments of the millennials and the oldest segment of Gen Z—That bleed-over part, mainly 23‑ to 25‑year‑olds who really want to see their brand connect with them on a different level and aren't really into traditional advertising.

[Taco Bell is] giving them something that's influenced by meme culture and their online obsessions that they see on Reddit. A good example is that Supreme x Louis Vuitton collab, when people were willing to do car wraps, get that matching outfit and go over the top because it's something they love.

What is the significance of choosing an e‑commerce platform to launch and promote the wrapping paper on?

We launched on Cyber Monday, which is one of the biggest online sales days of the year. [Amazon is] where we find, through our research using proprietary tools, that our consumers are doing most of their holiday shopping. Naturally, it makes the most sense to sell it there. It's easy to activate, easy to ship through. It just makes a lot of sense and modernizes our brand appeal.

Did you also choose Amazon because you know that the market you're tapping into would be shopping on that platform?

It's because it's one of the main, biggest e‑commerce platforms right now. Something like Etsy doesn't feel right for a brand to be on when it's less bespoke. Creating a platform within our website felt like forcing a shopping behavior versus tapping into an existing consumer journey.

What is the value in creating a branded product that buyers then use to wrap and gift another person?

We want to help them fuel the cult of Taco Bell. It doesn't matter if you're a social influencer or just an average fan, we want to become the next‑level word of mouth. What really matters to us is what they're saying person to person.

This wrapping paper as a consumer experience is kind of ridiculous, a little bit out there and unexpected, which fits how Taco Bell stands out a bit in its category. 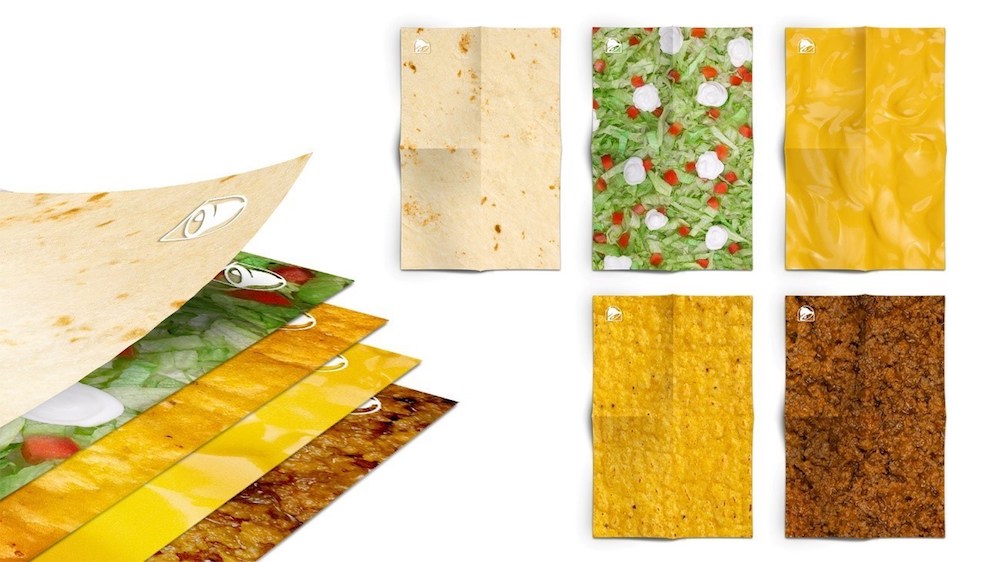 The wrapping paper is going to be sold only in Canada. Could you explain the decision around that?

The U.S. brand is obviously huge. We're looking to help elevate our brand within the Canadian market and stand out within the crowded QSR space, which is smaller there than in the U.S., and to give the Canadian fans something special. Often for Canadian consumers, with all retail and QSR, they often miss out on options available in America.

Usually the menus are often more limited, or they have fewer varieties, or it's only sold online at this clothing retailer and it only ships to the U.S. We're used to having these handcuffs on us as Canadians about what we can and cannot buy. We don't often get something special.

We know that Taco Bell fans love a Canadian exclusive, for example, the Fries Supreme. It's something that evokes jealousy from the U.S., so it's really treating Canadians to something special.

What can Taco Bell fans expect as far as brand activations after the holiday season? Will there be any product sold in physical Taco Bell locations, or are you strictly sticking to e‑commerce and Amazon?

The plan is to stick to e‑commerce right now because it's easier to scale—if we were to choose to grow. That is the most cost‑efficient and strategic way to do that, but we are always looking for new brand‑related items for fans, and looking to add items that can help grow this cult of Taco Bell.

Is there anything after the holiday season we can expect from Taco Bell?

Just more crazy, fun ideas and doing the unexpected for a QSR brand.