Gap Inc. Reveals The (Unsexy) Technology That Will Help Drive Business In 2019

James Thordsen, senior director of product management for the apparel retailer, spoke with PSFK on how perks like a Denim Gallery and a In Stock On Shelf app will ease and enhance the shopper experience in meaningful ways

Sometimes it’s the unsexy innovations, not the magic mirrors or the app that lets shoppers try on dozens of lipstick shades via their digital visage, that impact shoppers in more far-reaching ways than the buzzy stuff—like tech that simply locates a missing item on a store shelf, or helps customers land a pair of well-fitting jeans.

It’s a notion the Gap Inc. seems to be going with in an Uber-ized retail landscape where offering consumers heightened convenience has become the ultimate luxury. For shoppers who can get anything and everything online, products have become increasingly commoditized—so retailers are scrambling to over-deliver in other ways.

One need only look to how retailers were tripping over themselves this holiday season to redefine convenience, from Walmart’s digital Store Map that steers shoppers to their desired items to Gap Inc. brand Old Navy offering roundtrip Lyft rides to customers picking up online orders in store.

“What we’re seeing is that shoppers’ definition of ease and convenience is changing,” James Thordsen, senior director of product management at Gap Inc., told PSFK.

Here are three (simple) ways Gap Inc. is heeding the call for service-minded convenience with technology designed to automate efficiency and sooth longtime shopper pain points. “Innovation sometimes might be the magic mirror, but often, it’s not,” he said.

Slaying Out Of Stocks

If a shopper can’t find what they want on a retail shelf, they’ll often forgo the purchase or bolt and buy it from a competitor, and that’s never been more true than today, as an endless aisle of choice is merely a click away.

From the multichannel shopper’s perspective, “If I’m going to spend the time to go to the store, I really want it to be there,” Thordsen said. “Stores sometimes struggle to know what they need to get from the back of the house on to the sales floor.”

Merchants are paying a hefty price for that struggle. Out of stocks cost retailers worldwide a whopping $984 billion in missed sales, including $145 billion in North America alone, according to IHL Group.

In Gap’s stores, manual inventory tracking on the sales floor was a missing-merchandise culprit. Store associates were relegated to physically sifting through store racks to see if an item was on the floor.

To automate inventory management and boost shelf-availability accuracy, Gap store associates have been equipped with handheld devices that alert then when an item needs replenishing via the In Stock on Shelf mobile app that after a test run, launched across all Gap brand stores in 2018. 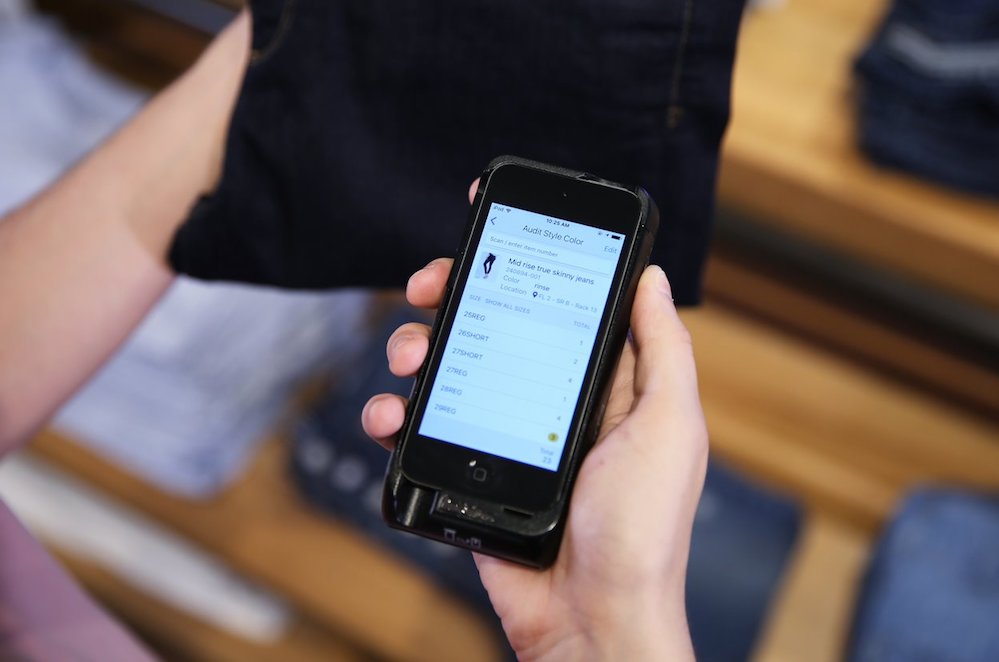 The solution is bearing fruit, Thordsen said. Before In Stock On Shelf, “we found that 40% of the time, shoppers couldn’t find their item. Now that’s only 1% of the time.”

From the device, store associates can also order sold-out inventory on the spot, “and just send it to the shopper’s home free of charge, as to not lose the sale,” he said. “It’s had a meaningful impact on customer satisfaction.”

The solution has since rolled out to Athleta and Banana Republic, as well as selects product categories at Old Navy.

When it comes to shopping for jeans, the struggle is real.

“Denim is a really emotional purchase for people. They struggle to find ones that fit them,” Thordsen said. “There is a lot of self image or self confidence attached to it.”

But the standard for marketing jeans has long catered to anything but the average American woman, who’s a size 14. “Most retailers have a history of putting clothes on size two and size zero models, which is not the average size of America,” he said.

With its online Denim Gallery prototype, the Gap is testing the theory that if shoppers can see photos of 12 women wearing Gap jeans, whether they’re size two or 20, they’ll have a better idea of how a pair might look on them. The idea is to offer up relatable images so that a shopper might say, “’that woman looks more like me. Do I like the way the way [the fabric] stretches and drapes?’” Thordsen said.

The Denim Gallery is one expression of the all-sizes-and-shapes inclusivity of the body-positivity movement, which is propelling retailers like Aerie in the intimate-apparel space, for example, while tripping up Victoria’s Secret.

For many shoppers, “feeling like you look great in a pair of jeans makes them feel like a million bucks,” he said.

While the path to purchase more often than not starts on a mobile device, it also increasingly ends there.

Indeed, U.S. retail m-commerce, purchases made from smartphones and tablets (but overwhelmingly by phone), is projected to generate $270.4 billion in 2019, up from an estimated $208.13 billion this year, according to e Marketer data.

To that end, the Gap has been overhauling its m-commerce experience, which wasn’t optimized for the mobile web. Making a purchase called for navigating multiple screens for sign-ins, billing and placing an order.

The retailer launched a mobile redesign that enabled key buying information, like the products in a virtual shopping cart, to always be in view. Gap Inc. also retooled the mobile site so that purchase selections are easier to follow and require fewer clicks.

All told, the Gap’s technology upgrades are not revolutionary, but “evolutionary innovation,” Thordsen said. “We’re taking existing patterns and things that shoppers already do, and are trying to make them significantly better,” he said. “We also ask ourselves all the time, ‘Is this really solving a real customer problem?’”