The president of Champion Athleticwear and director of marketing speak to PSFK about using the brand's legacy in new, global and digital-led ways to maintain momentum into the future

A successful marketing campaign today goes beyond simply “hype.” Consumers are faced with an oversaturation of digital content, and to effectively engage them, brands need to build genuine connections and foster a sense of community. Naturally, brands with athletics and sports at the center of their DNA are poised to lead in this new environment. To kick off its 100th anniversary celebratory campaign, Champion is tapping into its heritage through a year-long activation that will begin on social channels, eventually transitioning into in-store events, a capsule Century Collection and other engagements centered around the celebration of teams.

The campaign’s inclusive messaging is the optimal approach as it seeks to reach a wider audience outside of the U.S., particularly in the Europe and Asia marketplaces. Likewise, by engaging the omnichannel consumer—firstly by raising awareness through the Champion100.com domain and later through in-store activations and product offerings—Champion is able to create holistic messaging that is as multidimensional as the audience it pursues.

We sat down with Susan Hennike, President of Champion Athleticwear, and David Robertson, Director Champion Brand Marketing, to discuss the inspiration behind the campaign and how it will evolve over the course of the year.

PSFK: What was your inspiration when conceiving this campaign?

Certainly it started with athletic teams, but now even today, it includes all kinds of teams, all kinds of communities. No matter what your crew or your tribe is, we are there supporting all these different, diverse fans that we have.

What were some of your primary objectives?

What we're doing is we're really celebrating different kinds of teams and taking a look at what “team” means in 2019. We'll be highlighting two teams from those that we've been a part of in the past—like the Dream Team, the 1992 men's Olympic basketball team for the U.S.. It was the greatest collection of basketball players ever on the team. They were all wearing Champion uniforms. We've partnered with Magic Johnson to share that team story.

We're also profiling some teams today, including Urban Dove, a really fascinating charter school in Brooklyn that has a unique approach to education. They've taken at‑risk kids and used a team, sports approach. They've had a very high success rate with kids who have struggled in traditional school environments. We showcase them as a modern‑looking team.

That's really exciting as we have had a lot of new champions join us and learn a little bit about us. This is our opportunity to tell them a bit of our history. Our history is rooted in sport, and heritage, and culture, and there's so much more and that that will, hopefully, poise us for the next 100 years. We're a very inclusive brand. We are celebrating all sorts of different teams. 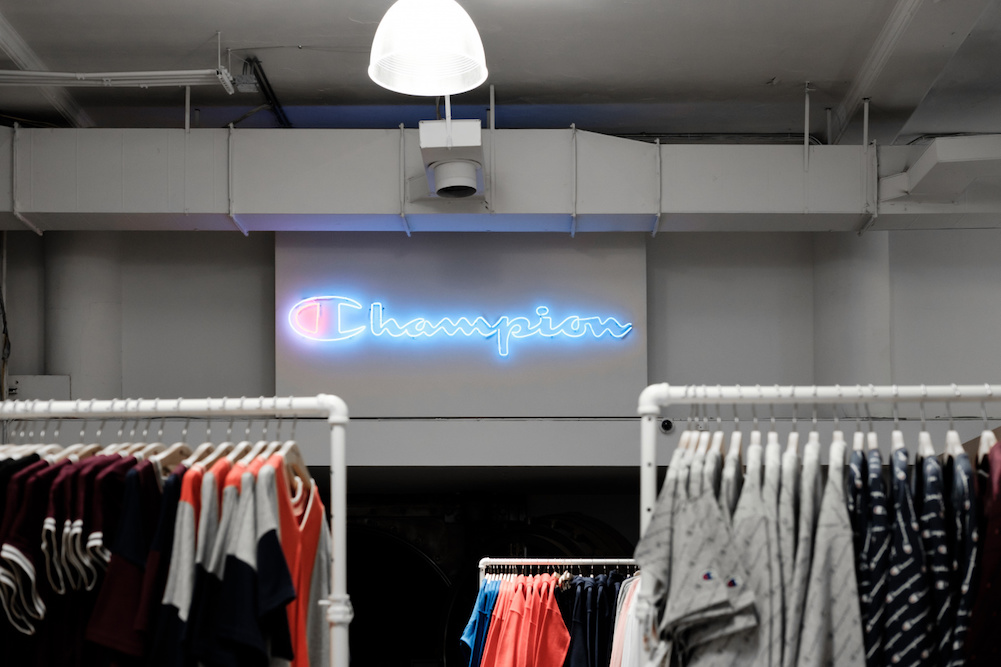 The last time PSFK spoke to Champion at its New York store, we discussed the nature of the growth that it is experiencing. You both touched upon this aspect of community, and sportsmanship, and team building. Would you say you’ve created an accessible gateway to the brand for newcomers?

We all came to the agreement that it's definitely something that resonates. Again, to come for our first global campaign and to be for the team, we think it's a great opportunity.

David: One of the things that we're doing too is we're making this very much about consumer participation. We're not only showcasing different teams, but we are inviting consumers to share their team. It's almost about their team. We're expecting to get really great participation from consumers in all of the key regions.

How can people participate? What kind of activations is Champion doing?

David:  I would say by far, digital is going to play the biggest part. That's the world we live in today. Our consumers really connect with us today digitally. We will have social media content on Instagram, Facebook and Twitter.

We've also created a microsite, champion100.com, which will be a way that consumers get to participate and also learn about the campaign, learn about history of the brand. We will certainly also be activating in our Champion stores in the U.S., in Europe and in Asia. We will have some events coming in the second half of the year.

One of the wonderful things about our stores is that they're a great way for consumers to connect with us directly and for us to have that one‑to‑one interaction with them. That will be a part of it as well.

Susan: Throughout the year, we're also working with our wonderful consumer partners, national department stores and specialty retailers to bring this story to life. We're going to be offering some limited-edition capsule collections, some apparel pieces, caps, slides, bags. All of these things will be introduced in our stores, digitally on Champion.com, as well as with our retailers. We're going to be bringing it to life throughout the whole year in many different forms, and fashions.

Susan:  Absolutely. I think it's so important to include our retailers outside of our own stores. They're as excited as we are to be part of this. You'll see some fun things happening there. It is a holistic approach overall. 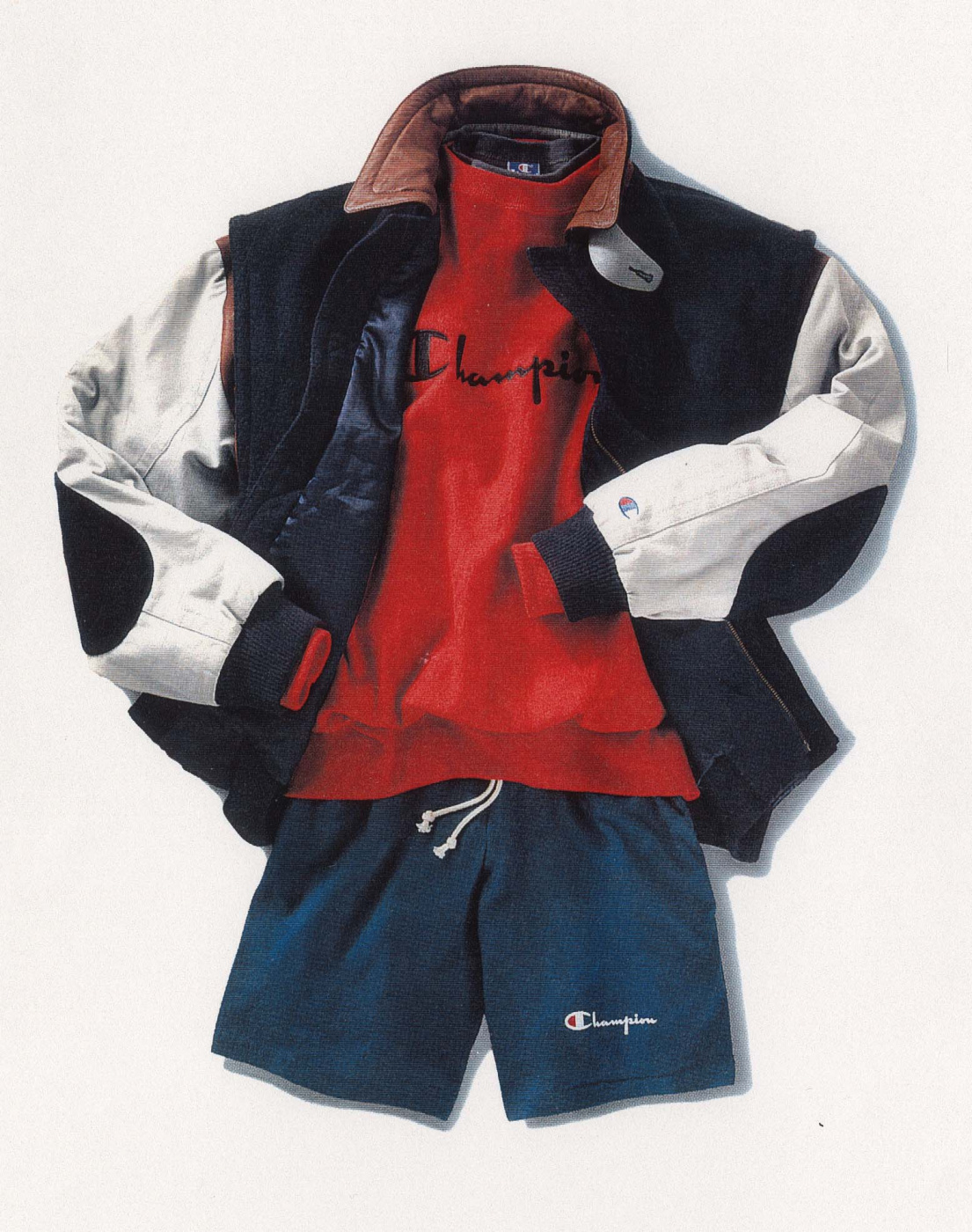 Can you describe what the microsite looks like and what the consumer experience is?

David: On the front page, they’ll get an understanding of what the campaign is all about, the idea of 100 years for the team. We'll also have a tab where we will have user‑generated content, where people use that hashtag, #champion, to share their team with us.

How does this compare to any of Champion’s past campaigns?

David: There's a difference certainly in that it is a global campaign. That's different for us. We felt it was really important that we did this in a consistent way over all the regions.

We have been increasingly leaning into social media and digital communications. We have 4.4 million Instagram followers on our U.S. account. We found that digital is really playing a more central role in this campaign than any other time in history.

Susan: We have a strong DNA around the team, and I think one of the changes is the global aspect of it. This is also an evolution of what a team means and what sports means to the younger consumer.

David:  There's a strong call to action for consumers to participate. We're looking at this as an opportunity to connect with them and to hear from them. That's an important aspect for the campaign. It's not just us telling them what we want them to know about Champion. We want to hear from them.

For more from brands like Champion that are remaining relevant by embracing new campaigns and methods of engagement, see PSFK’s reports and newsletters.