Piers Fawkes dives into what life will look like in a decade. Next up is parasitic living, which makes the most of each nook and cranny

In this series of articles, PSFK's Piers Fawkes will explore scenarios and signals that suggest the ways in which we will live by the end of this new decade. We’ll look at six key future trends, listen to expert opinions and examine fringe ideas that may be mainstream by 2030. This is the second post in the Future of Home+Living series.

Excrescent Utopia is an architectural concept that explores the idea of city dwellers finding living spaces on the literal edges of our environment. In this vision, the London-based architecture student Milo Ayden De Luca presents an idea of a lamp post being adapted to include boxes that people could sleep, eat or work in.

Ayden De Luca originally developed the original idea for his coursework at university, but it subsequently caught the attention of the BBC, CNN and design destinations like Dezeen. At the time he developed Excrescent Utopia, he imagined that this could be something we would see on the streets of London by the mid-2020s. On his personal website, Ayden De Luca wrote, “Excrescent Utopia is a conceptual parasite dwelling providing a new generation of homeless citizens temporary shelter through the occupation of the urban fabric’s invisible spaces, proposing a new identity and raising awareness of society’s neglect.”

While Ayden De Luca developed this idea with homeless people in mind, to me the concept is an extreme signal of how city dwellers could literally hack their urban experience to create parasitic places to live, work and play in the future. I reached out and emailed back and forth with the student architect, and he told me:

“The idea to adapt street furniture derived from two things: the concept of ‘the street' and the elements which comprise and define it, and the concept of occupying the invisible spaces within the urban environment.

“As a conceptual project and from macro perspective, it seemed sensible to utilize the existing public infrastructure in this way. Building new infrastructure to support any kind of temporary dwelling would be far more time consuming and costly. In addition, it would be less reflective of the concept of the street and the provocation of reclaiming and re-appropriating it.” 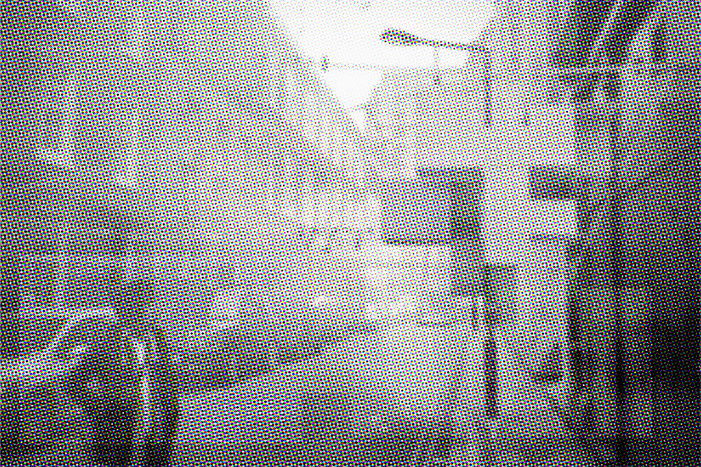 Eric Corey Freed is an architect and thought leader when it comes to the sustainable development of cities. When he spoke to me, he told me how excited he was to see the creative solutions people invent to grow in these in-between spaces:

“Certain cities around the world are already showing signs of this type of ‘architectural parasitism.’ In China, India and Brazil, we already can see numerous examples of people creating these ad-hoc living and working spaces in-between the existing urban fabric. More formerly industrialized cities are creating pathways to add density to existing neighborhoods. Accessory Dwelling Units (ADUs) are a basic example of how to quickly and easily infill new spaces in-between existing buildings. We need to build the equivalent area of New York City every five weeks for the next 33 years, so all ideas to increase density will be on the table. I’m excited to see the creative solutions people invent to grow in these in-between spaces.”

Milo Ayden De Luca’s project is a provocative signal about the way some of us could live in urban areas in the future.

Picture this scenario: Some people will choose not live in the growing number of compounds and community residences that will be taking over city neighborhoods by 2030. Some won’t be accepted to live in these communal compounds either. Instead, some residents will live, work and play in the nooks and crannies of our cities. People will look at the housing and public infrastructure and find ways to hack into it; they will find ways to create living situations in spaces that weren’t planned to support them.

On crowded buildings, these parasitic city-dwellers will add micro-nests where they will tap key resources or harvest them from the sun and rain. They’ll also convert underused spaces in buildings like garages and storage rooms into simple one room-dwellings. In the narrow spaces between buildings, they will create multi-floor comp-apartments connected by ladders, poles and fire escapes. In their homes — they will see the adaption of their furniture so it becomes multi-use. Tech-infused chairs, tables and desks will allow us to do different things within the smaller living spaces: Objects will be both coolers and cookers, lights and shades, power-packs and storage devices.

People will also identify other dead spaces in the urban infrastructure that can be brought to life with connectivity and alternative power. They will build offices that hang from under bridges or they will build mixed-use structures in unused street-parking spaces. Micro-homes will also appear on existing structures like sightseeing towers or radio masts. 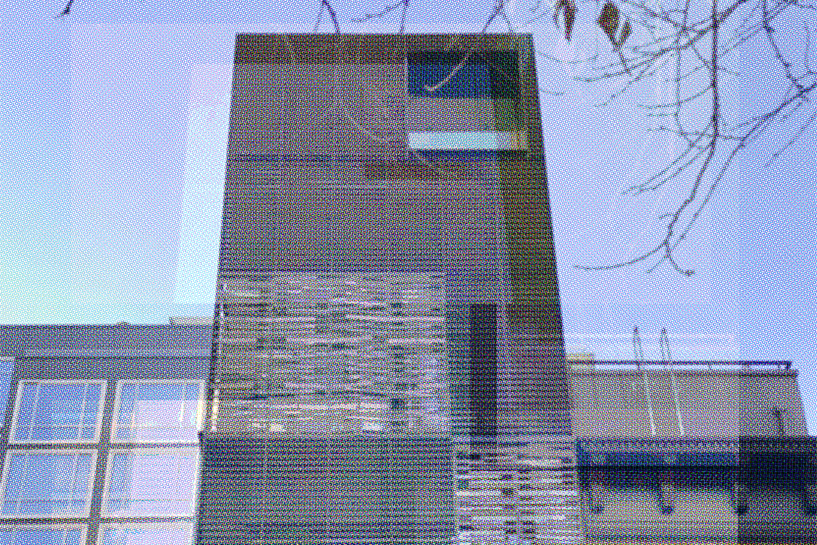 Around the world, less-used spaces are being converted to live and work spaces. In the San Francisco neighborhood of Russian Hill, this garage was recently converted into a home, for example. But designers seem to want to explore the parasitic living concept further.

Designed by El Sindicato Arquitectura in Ecuador, the Casa Parasito is a 39-square-foot, A-frame house prototype for urban rooftops. The design is focused on solving the basic habitability needs for a young person or couple by providing a bathroom, kitchen, bed, storage space and living space (eating, working, socializing) in a small area. The architects believe that they it can be built for just over $10,000 they told Fast Company. “We developed it as a prototype of what we think is small and replicable solution to city and worldwide problems such as gentrification, unwanted urban sprawl, global warming, and more.”

In Colorado, a standalone shed is being sold as an extra room for a backyard, but I wonder how these prefabricated spaces will be applied in city settings. When I spoke to the Studio Shed company founder Mike Koenig to help me understand the potential for these small buildings he told me that 95% of the buildings are already being sold to urban environments. He added,

“Granny suites, cottages and contemplative spaces have been around for hundreds of years. That said, I believe there are a few things that are driving interest in them today: The need for more housing solutions in the U.S.; the loosening of building restrictions and zoning across the country to encourage urban infill; and, more people working from home but finding that actually working in your house is not efficient.”

To understand how these might look like, it might be work checking the designs of remote cabins that are being developed today like this compact off-grid cabin in Australia. That said, these dwellings might take many forms—in Hamburg, Germany, the Pierdrei Hotel has placed a camping trailer on its roof for guests. (Echoes of Ready Player One, no?)

For his Masters of Architecture program, Matthew Chamberlain evolved the concept of a parasite home by suggesting the take-over of unused parking slots with tree houses that blend with the streets’ trees. The British student thinks that this approach would provide starter homes for students, young professionals and first-time buyers — or to people who are homeless or in the process of being rehoused. 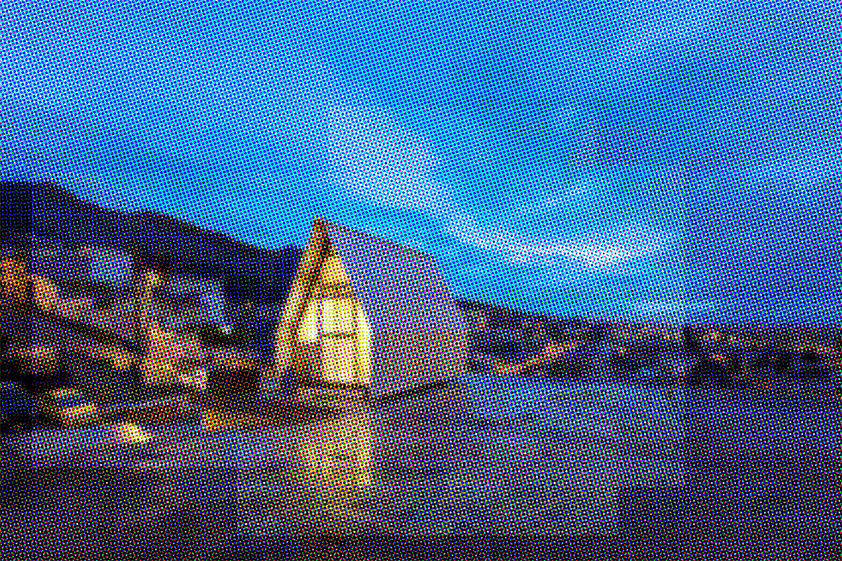 Across the Atlantic, the design team at Quadrangle architects have also been wondering how they can develop parasitic living. The Canadian studio developed a wild design for micro-homes bolted on the spine to Toronto’s CN Tower. For many years the CN tower was an icon as the tallest structure in the world but the designers now believe to reinvent its purpose. They hope the concept will inspire other large-scale freestanding developments globally, increasing the value they bring to their home cities and environments.

While the Quadrangle project might seem to be a fantasy, Milo Ayden De Luca thinks that it’s important to pursue progressive ideas:

“[While] proper consideration should be given to investigate and evaluate any existing supporting structure utilized for support to avoid failures and ensure safety and success, this shouldn’t deter development of any conceptual projects like Excrescent Utopia where the objectives are to explore the potential of this architectural approach and its application. In this context, the possibilities are potentially endless.”

Flux Haus is also an idea for massive parasitic housing in Hong Kong one hundred years from now. In this proposal, five apartment blocks would be wrapped in a network of single-person pods.

Winka Dubbeldam is a renowned architect who enjoys developing parasitic projects. Her practice Archi-Tectonics recently added a skin to a building in New York’s West Village so that it tripled the living space of one building. While she admits that parasitic architecture has many ecological benefits, she believes in building on the past rather than replacing it with the new. Winka told me on a call:

“Heritage is really important so we can’t just go around tearing down buildings. Buildings have ancient souls and we want to keep keeping that going. I’m interested in how we keep existing characteristics of the city and add to it. Contrasting the past with the futurist is more interesting — versus building something new.” 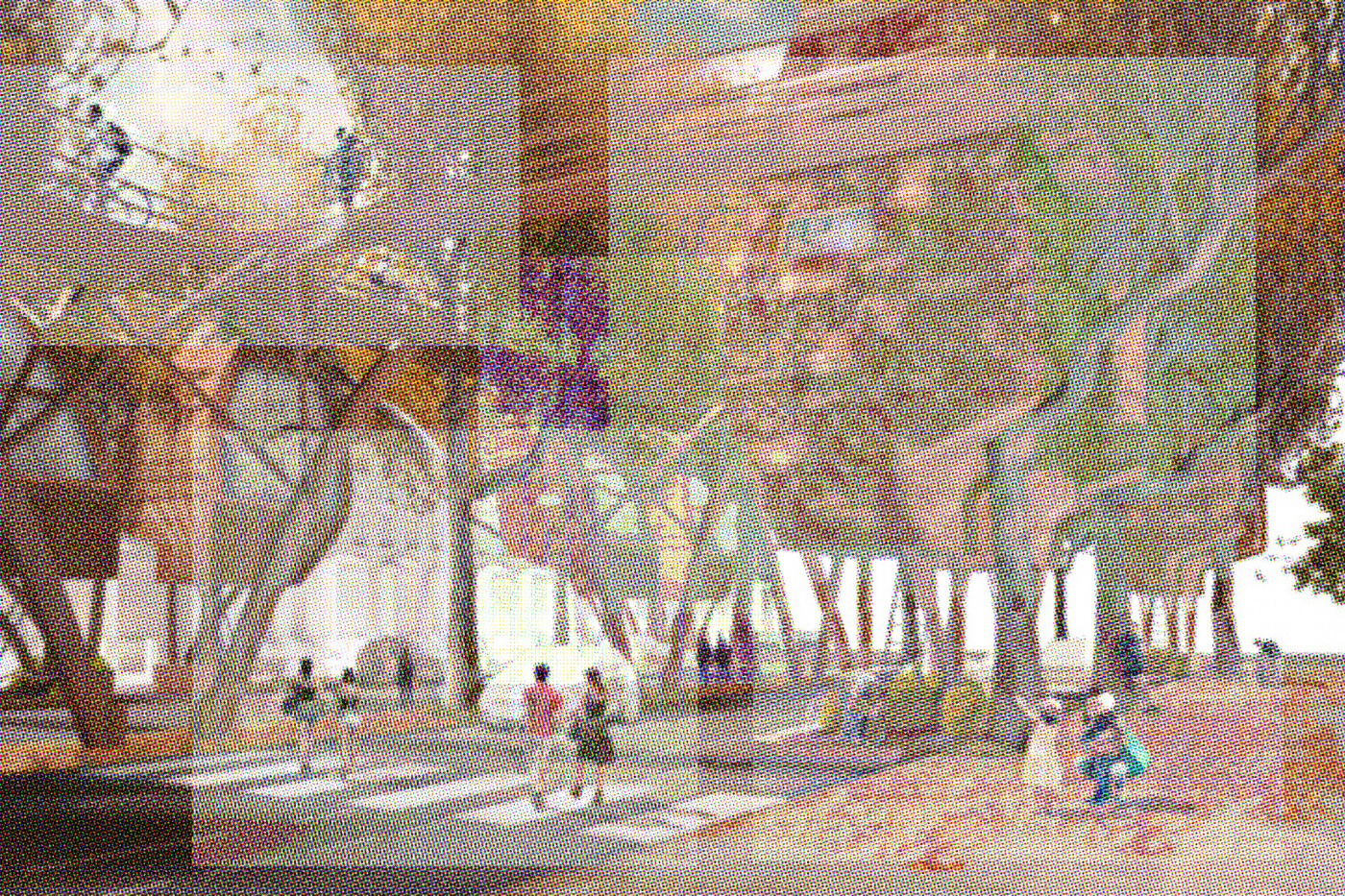 It’s not just homes that will be bolt-on or squeeze-in: A new office “block” in Tokyo is less than 3 meters wide; in Shanghai, they have built a one person art gallery in Shanghai; in Uruguay, a house’s backyard was re-allocated for a parasite cafe; and in Sicily the walls of a building become the tables and benches for another cafe. And this is a little off the wall ,  but what do we do with all the old vehicles we aren’t driving? Check the Swimming Pool Bus or trailer by Benedetto Bufalino of Studio Benedetto for more lateral hints at future design.

Driving some of this adoption to parasitic living is the development of new construction methods (including 3D printing), better computer modeling and pre-fabrication off-site. This can also be a sustainable approach to architecture. Ayden De Luca says:

“We are also now seeing even greater attention and drive towards sustainable design. In this respect, the value of re-using, re-purposing, or re-activating which most architectural parasites are dependent on adds further motivation and the continued rise of single living.”

One of the biggest drivers is the reduction in the average number of dwellers in a home. The Times of London also has a piece on the trend of permanent singledom, while the Wall Street Journal recently wrote about companies responding the increasing number of single residences saying that consumer firms are catering to single-person households, upending generations of family-focused marketing; smaller appliances, individual packaging and giant toilet-paper rolls.

For the companies that time their entrance perfectly, living in crammed spaces could actually be big business. 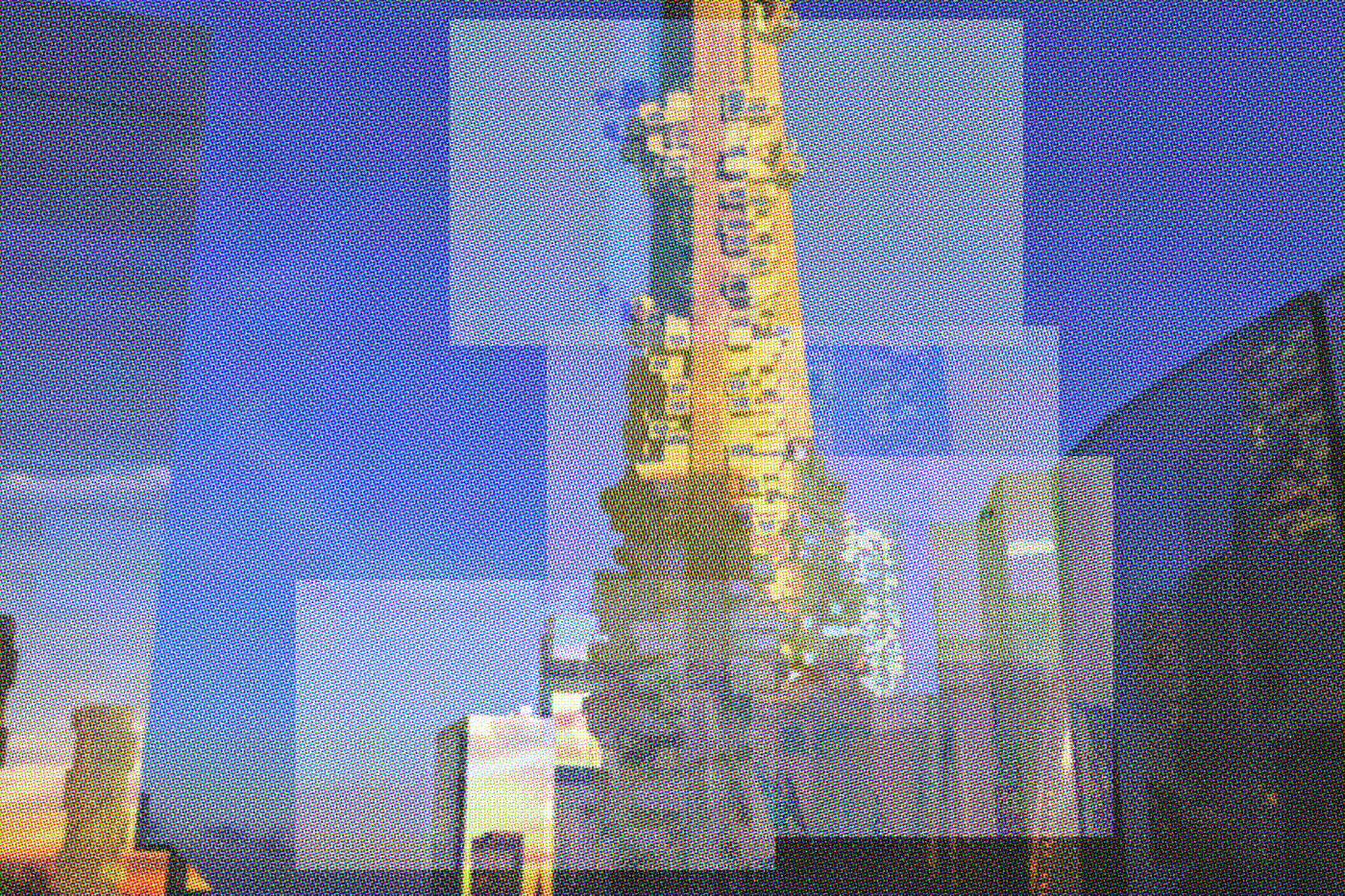