PSFK looks into the ways retrofuturism is being applied to modern technology, design and innovation

A look at a design trend for tomorrow from yesterday

The Ford Bronco is one of the most iconic cars of the 20th century. Today, it's still a collectors item. The vehicle was a free-spirited, off-road truck that appealed to the soldiers returning home, tapping into the growing American desire to escape city life.

Ford sold the original Bronco from 1966 to 1977 as a go-anywhere, do-anything vehicle. The design is iconic, described by Car and Driver as “combining off-road excellence with unabashed luxury.” Those first-run Broncos are still kicking around on eBay for prices as high as $150,000. But these antique vehicles often need a lot of work in the shop and their systems and fuel efficiency come from a bygone era of automotive engineering. Often, they languish in garages meant only for private view, or for rare rallies.

But the LA-based ZeroLabs have come up with a solution: Marry classic design with modern technology. It rebuilds the shells of vintage Broncos and refit them with modern suspension and electric engines. Keeping the spirit of the original, its design use the Bronco chassis and manual transmission. Modern touches include vegan interiors and carbon fiber body panels. 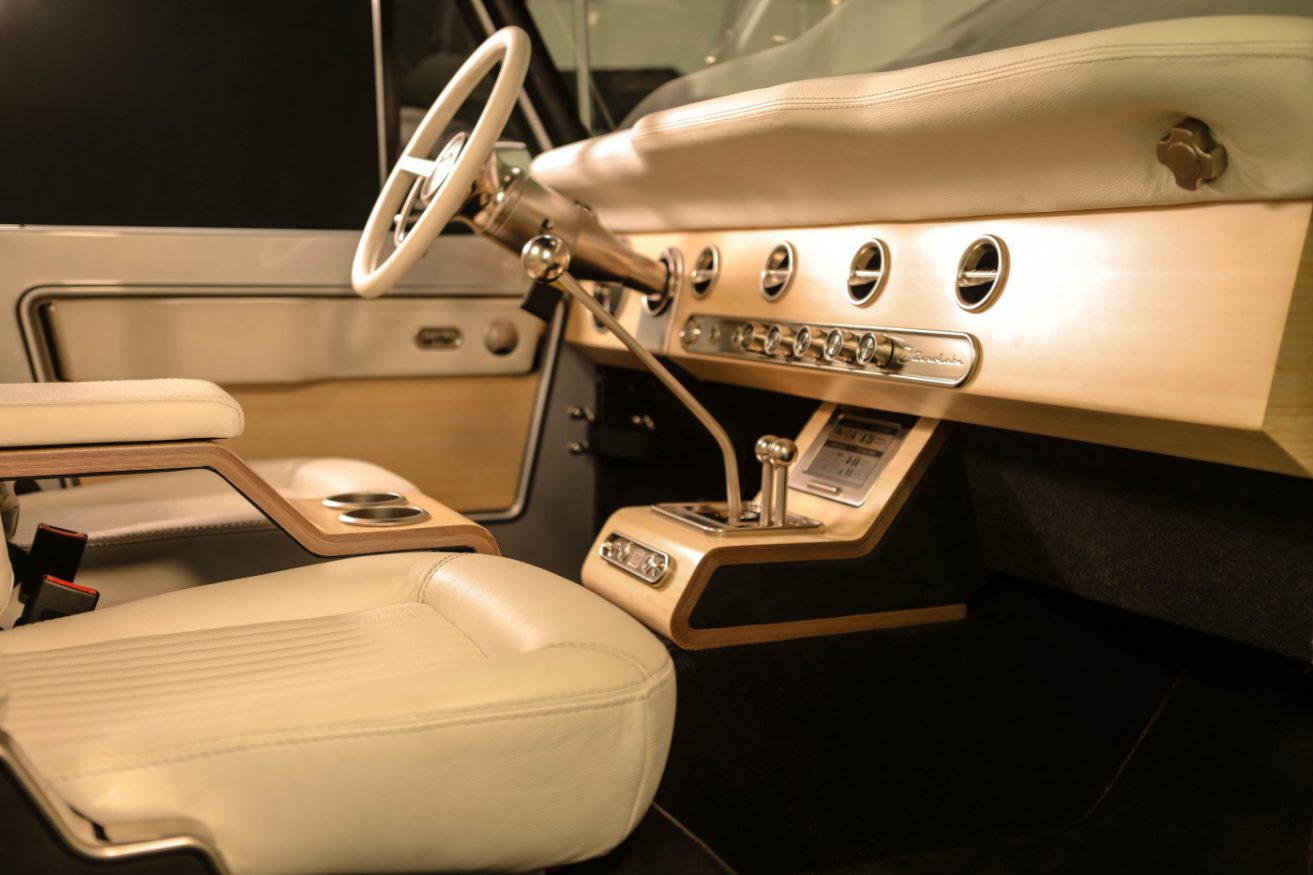 Currently in the planning phase, the company expects to start shipping vehicles in late 2020. On its site, ZeroLabs writes, “Our goal is to offer everything you love, minus everything you hate. To be enjoyed now and well into the future.”

ZeroLabs founder Adam Roe believes that we need to embrace the past with sights set firmly on the future. “We now face a difficult decision, one that affects the future of our children and our home,” Roe says. “We must let vehicles of the past go so that we can embrace a clean energy future. Sadly, without them, our memories of who we were will fade. Our time will be forgotten or lost. In many ways, their story is our story.”

This sentiment gets to the heart of Yesterday's Tomorrow, a design trend that's been gaining steam in recent years. It's not about remembering a perfect yesterday, but rather about picking up forgotten threads to create idealized version of the future informed by the past. Automakers seem to be at the forefront of the movement—maybe because the industry creates spaces where designers can dream unrestrained.

Elsewhere, car concepts are embracing the past. Volkswagen recently presented its ID. BUGGY, an electric concept car that seemingly takes cues from Scooby-Doo cartoons. Hertz Italy rents classic cars, including one 1962 Fiat refitted with an electric motor. Mercedes unveiled a speedster that looks like the 1920's and drives like the 2020's.

Roe and his peers are taking the key aspects of a nostalgic, glorified past, redeveloping them in a modern context. And it's not just cars—retrofuturism is adapting the aesthetics and principles of yesteryear in a big way, this time updated with modern tech and a renewed sense of purpose.

Here's the key takeaway ZeroLabs' Bronco is a signal for the future of design….

So, How Will Things Look In The Future?

Picture this: Technology and product design will borrow from an earlier era of perceived good times. Whether it’s our refrigerators or our apartments, there will be an echo in the design of the space-age and the boom years of the 50's and 60's — but with new guts, like electronic motors and artificial intelligence.

There will also be nostalgia for early era of the internet and personal computers—including hard drives and modems. While the look of these products might hark back to simpler, and maybe more exciting, times, they will be filled with cutting-edge technologies. These already manifest as electronic engines in retro cars, and could become network services in Web 1.0-style flash drives or mid-century modern furniture made from eco-friendly materials.

Apparel & Beauty customers will become fascinated with the fashion of previous generations, but requesting it on-demand and receiving it within hours. Products will meet modern standards and echo the latest styles. Just like today, there will be 60's basics, 70's menswear and even an introspective look at the darker aspects of 90's hacker culture.

Grocery and Food & Beverage will see the return of the popularity of mass-produced packaged foods with fine-tuned, engineered ingredients that meet the latest dietary concerns. Captain Crunch and Oreos might become much healthier in the next decade. Food will be protected in recyclable or biodegradable packaging.

Store & Packaging Design will return of the jet-age aesthetic, including streamlined shapes and delight at the use of chrome—but digitally enabled, responsive and sometimes automated. Nostalgia will be used to sell everything from toys to snack foods.

Automotive & Mobility is headed toward limited-edition, retro-looking cars built on legacy chassis and systems. Interiors, too could get an update inspired by the past, from vegan leather car seats to planes outfitted in immersive designs that recall the jet-setting lifestyle from decades ago.

Hotels, Hospitality & Travel businesses will see a new interest in ‘attractions' such water parks and theme parks —but enhanced with tracking technology which guides the visitors and ups the energy of the experience. 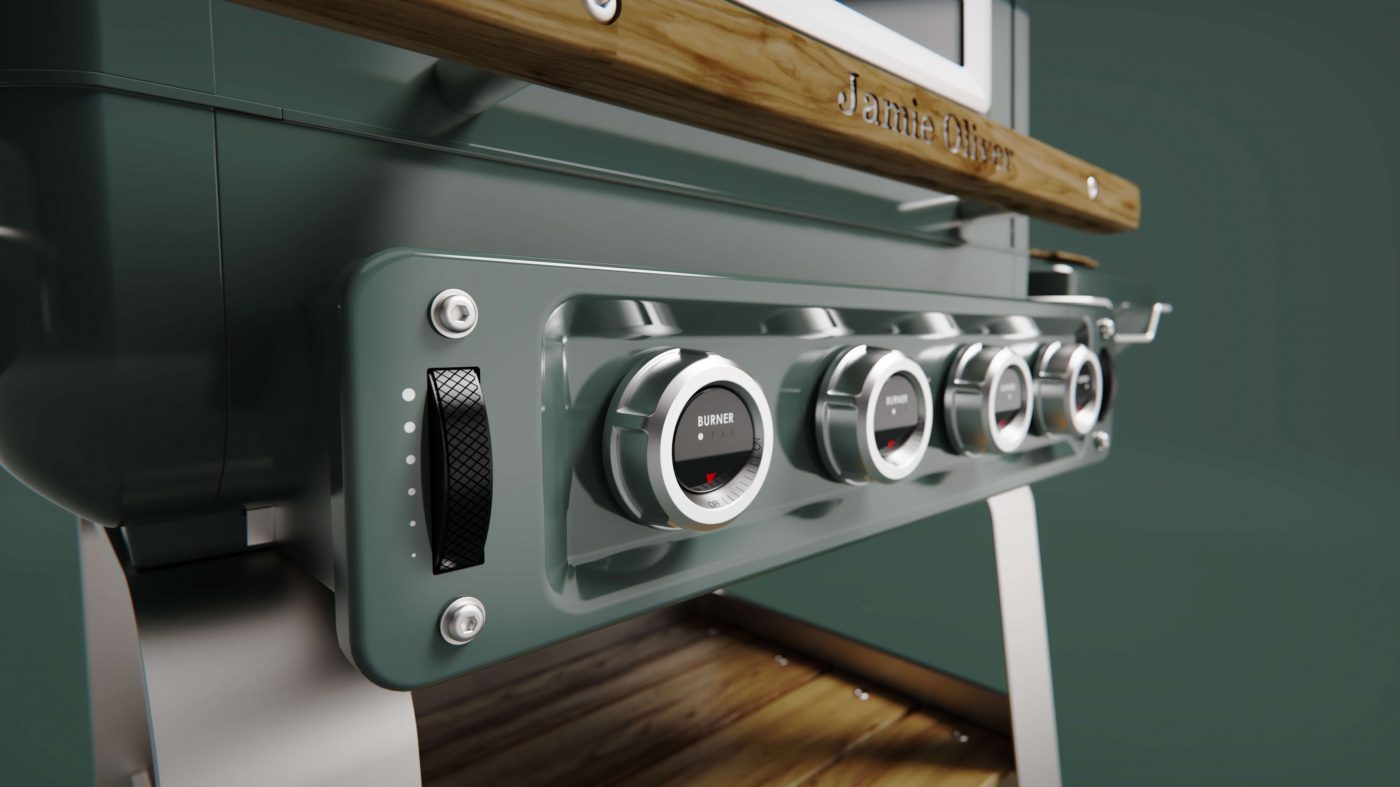 Everyone’s favorite cheeky British cook has new product range, and while all chefs love to cash in with a brand extension or two, his barbecue grill connects with this design trend. Jamie Oliver's forthcoming grill line takes inspiration from vintage cars with a look that Yanko Design calls “the backside of a Land Rover.” Instead of trying to fit in touchscreens and other modern interfaces, tghe design firm Smaac chosea  straightforward design instead employed knobs and hardy switches. 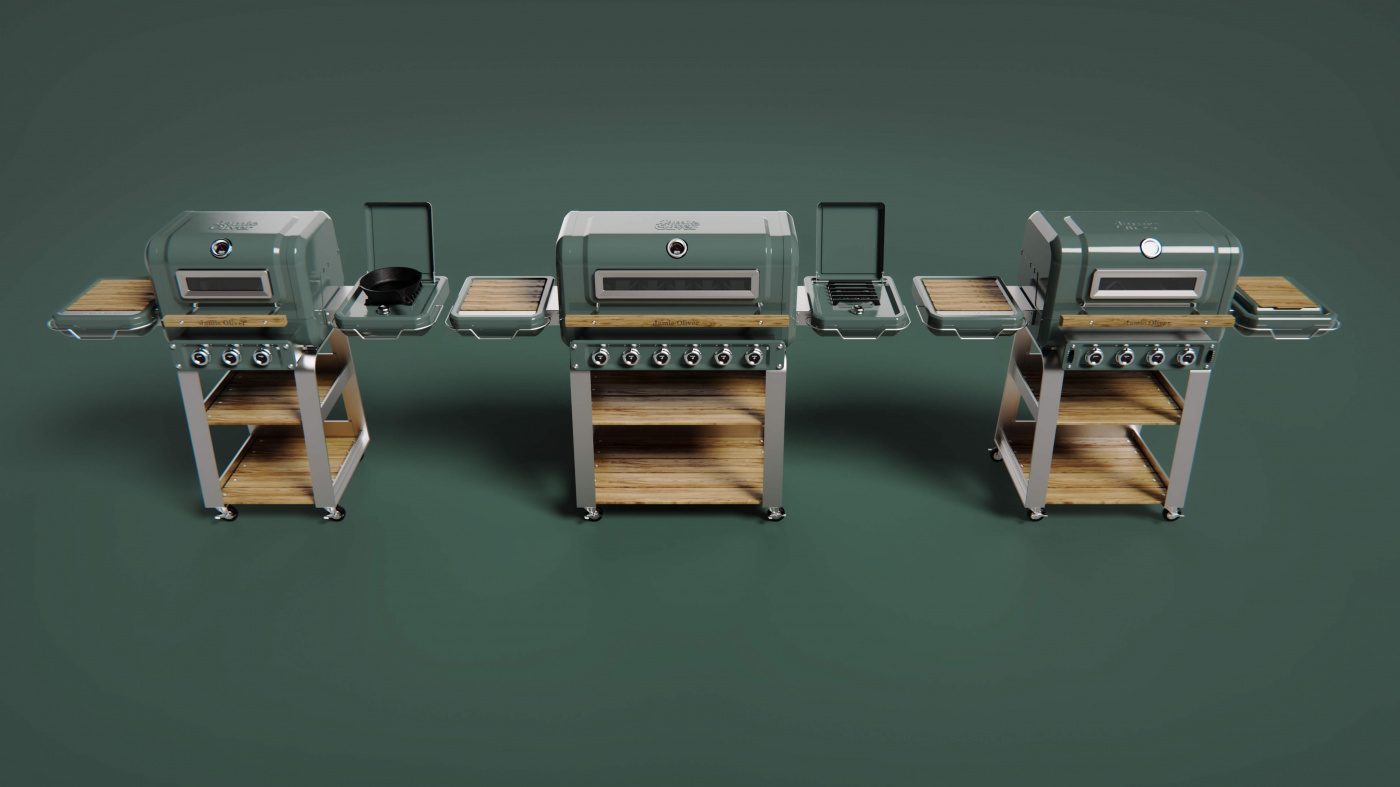 Elsewhere, other products act like updated versions of an ideal mid-century kitchen. SMEG, which was founded in 1948, has weathered changing decades and tastes by sticking to its classic designs; Urban Outfitters even stocks some of its kitchen essentials, and collaborations with Neiman Marcus and Disney keep it fresh.

We're also seeing signals of Yesterday’s Tomorrow in other types of products and experiences. Tempus electric bikes take inspiration from vintage motorcycles, but is powered by a battery—styled to look like a gas tank, of course. The HM7 Aquapod diving watch looks like a historic oddity, but is filled with today's most sophisticated mechanisms. Canoo is a subscription-only electric vehicle that arguably takes cues from retrofuturist design.

Home, hospitality and store design are also likely to change within the next decade. The new Standard Hotel in London has an aesthetic that embodies the best of retrofuturism, with vintage tilework in the bathrooms and Bauhaus-inspired details in the lounge. At JFK International Airport in New York City, the TWA Hotel harks back to a different era, with retro designs, a conversation pit and a graphic visual identity. 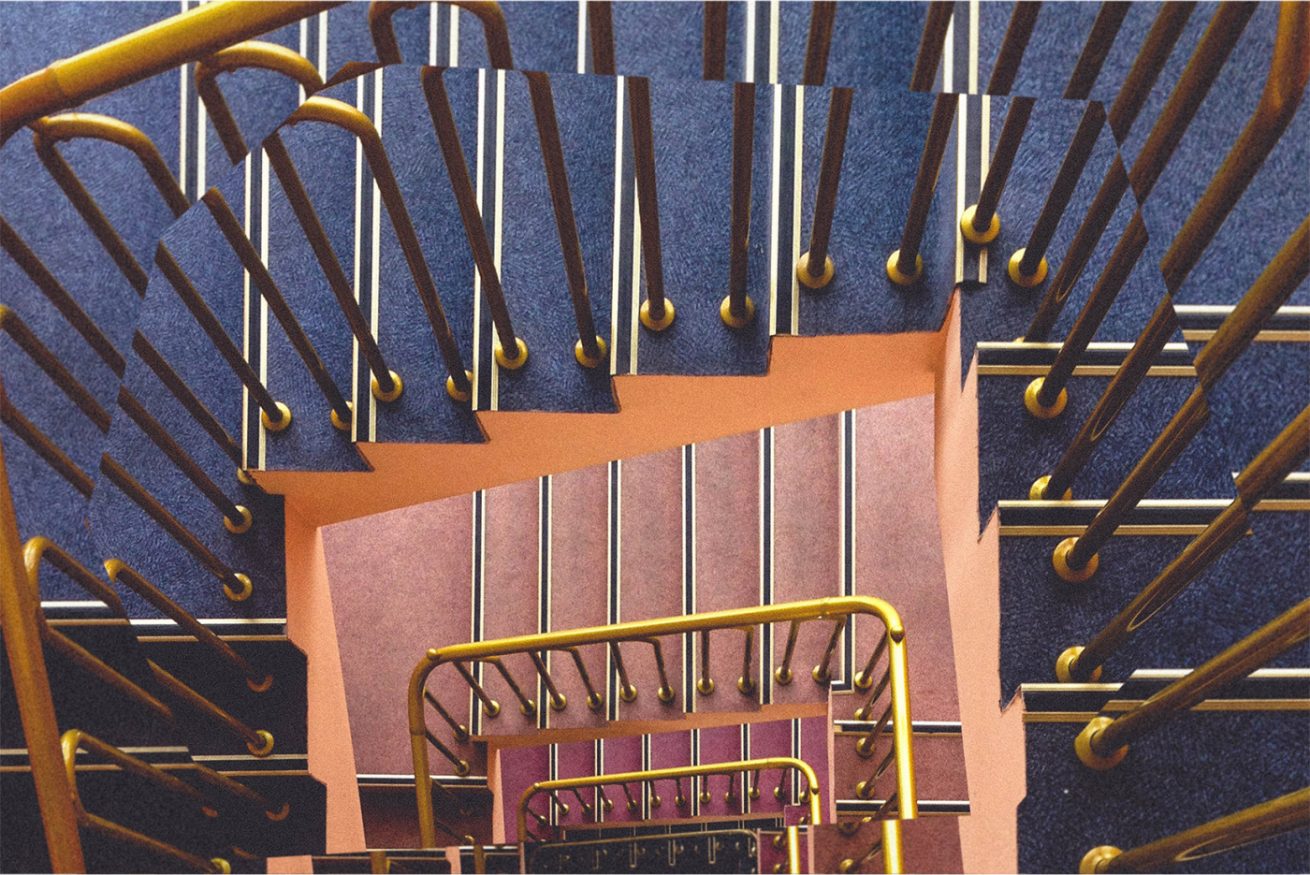 There’s also some exploration of classic materials in new contexts. A Newron motorbike incorporates wood into its daring design, and this new home in England leans heavily into cork.  Ettore Sottsass's Memphis design ethos is also making a comeback, made fresh with new materials.

Exploring a different, yet exciting era, the artist Attico Trentasei has produced Backup Days, a series that places contemporary typography and graphics on legacy storage devices, like floppy disks and CDs. Gym Class is a fan-zine that avoids the DIY-approach typical of the genre and employs a modern look & feel.

ZeroLabs' Adam Roe says that for every trend there is a counter movement and in this era of rapid technological advancement, it’s natural to look back. He ends the interview by adding, “In times when people are worried about the future, retro design reminds us of an idealized version of who we used to be—and, by extension, who we could be.” 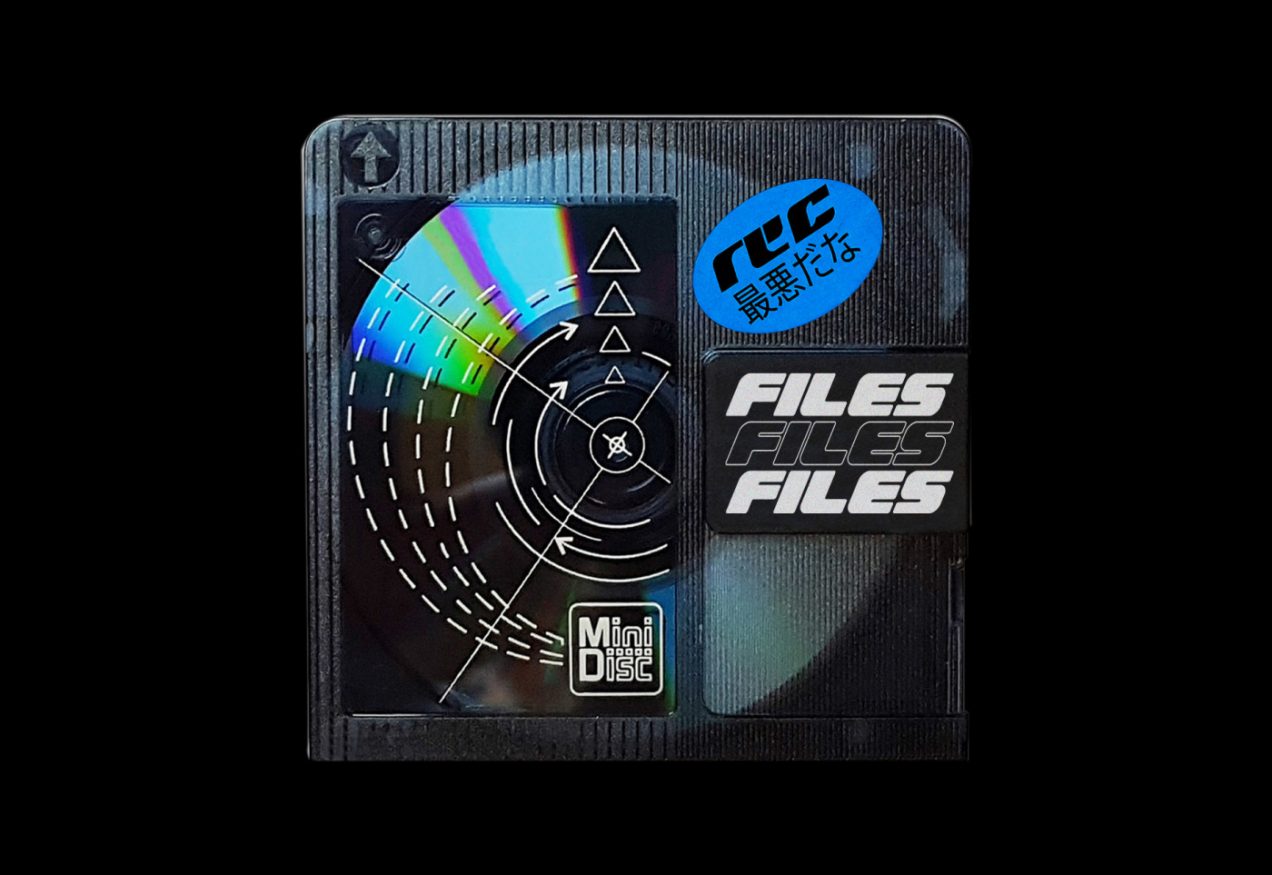 From the Back Up Days series by artist Attico Trentasei