Waymo, the company behind Google's autonomous car program, is expanding its driverless delivery partnership with UPS through the holidays.

The new six-week pilot will serve the Houston and Dallas-Fort Worth areas and support the high-volume holiday shopping and shipping season. Waymo vehicles will carry freight deliveries between the geographies using Class 8 Trucks, the highest gross vehicle weight rating (GVWR) in the U.S. which cover tractor trailers and 18-wheelers. The partner program will deploy Waymo self-driving vehicles to make deliveries. Each truck will have two specialists onboard, one driver with a commercial driver’s license, and one software technician who monitors operations while in autonomous mode, switching back to manual mode for other portions of the delivery segment.

The partnership expands on an existing agreement between Waymo and UPS going back to January 2020 that wrapped earlier this year. The goal of that initial initiative, where Waymo delivered small parcels in Phoenix, Arizona, with autonomos Chrysler Pacifica minivans, was to develop a long-term plan for how Waymo and UPS could work together. Waymo was able to come away from the Phoenix pilot with rich learnings on key program guardrails like vehicle hailing and loading-unloading of parcels during delivery.

The autonomous delivery trucking pilot will provide Waymo with a different dataset related to autonomous freight, rather than local delivery, and during the upcoming Houston and Dallas trial runs both Waymo and UPS will be gathering data around the efficiency and safety of the driverless semi-trucks. Waymo has plans to build a nine-acre testing facility and delivery hub for its autonomous semi-truck initiative within Texas, which is part of the reason this new pilot is taking place in the state.

The official number of Waymo autonomous vehicles being used for the Texas pilot hasn’t been made public, but the company has indicated that “multiple” trucks from its test fleet of driverless Peterbilts that are equipped with its fifth-generation driver technology will be participating. The driverless, but monitored and manned, semi trucks will be delivering goods for UPS’s North American Air Freight (NAAF) unit.

Recently Waymo has been undertaking a variety of initiatives to scale up its driverless delivery and autonomous trucking and transportation operations, specifically within the states of Texas, Arizona, and California. In June, the autonomous delivery company announced a freight hauling partnership with J.B. Hunt, taking place on the busy Interstate-45 between Houston and Fort Worth. Not too long after, Waymo also announced it would be constructing a dedicated truck hub in Dallas, as well as partnering with Ryder for fleet management services. All of this will provide a rich dataset for the autonomous delivery company’s fleet as they continue to build out their suite of next-generation first-and-last-mile options. 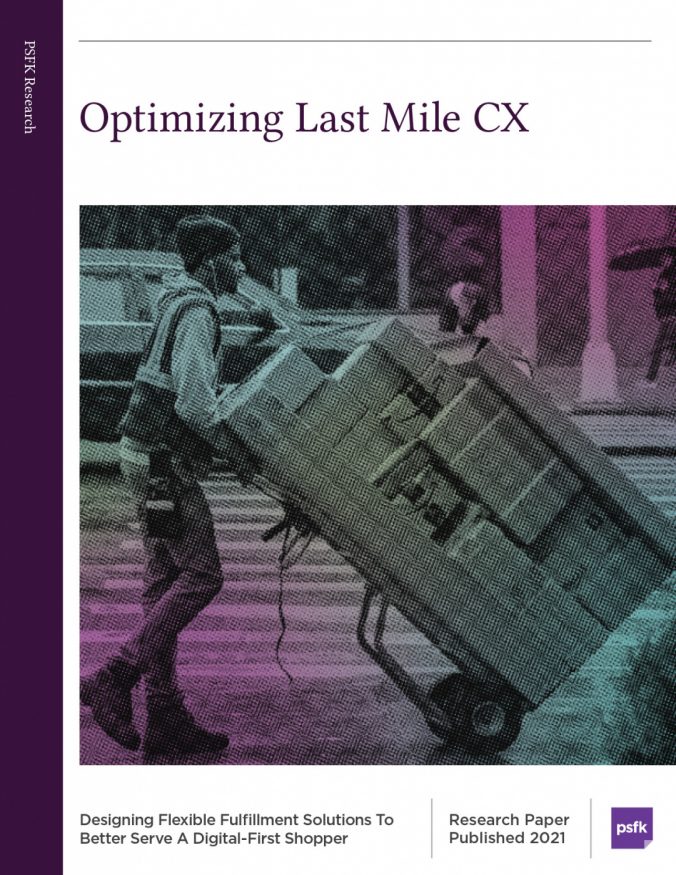 Buy Now
Optimizing Last Mile CX
727 articles
This article was contributed by the PSFK IQ team. IQ is a platform for insights and advice for creative professionals seeking to develop innovation in retail and customer experience.
Author of the article
PSFK Research