Billie Whitehouse, Wearable Experiments: Why We Need To Give Clothes Intelligence And Purpose

Designers must stretch themselves to connect farfetched ideas to create totally new ideas beyond the wrist.

Wearable tech designer Billie Whitehouse, who is also co-founder of Wearable Experiments, spoke at PSFK CONFERENCE 2014 about her goal to give what we wear intelligence and more purpose. Her first major project was Fundawear, vibrating underwear that transmits touch over the Internet for couples who are apart from each other. A awkwardly fun product, it’s not what people typically think of when they talk about wearable technology. Too many designers focus on the wrist, Whitehouse says, and have missed something really important about smart clothing; designing for intimacy, entertainment and other areas usually disconnected from the wearable tech conversation. 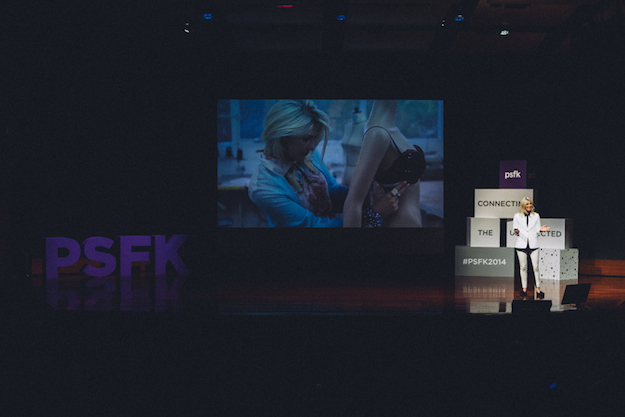 People don’t want to look or feel like a computer, Whitehouse claims, so she works very hard to make the technology invisible. While adhering to the ‘Less, but better’ design philosophy of Dieter Rams, she spoke about adding ‘complexity and irreverence’ when she creates clothing with purpose; People are complex and are ultimately the subject of her designs, and irreverent products are fun and will always attract attention.

The Alert Shirt is an example of this ethos. Shown in the video below, it transmits the excitement and even impacts occurring on the field of play to the wearer, letting them feel a literal rumble on their chest or bump when a player gets tackled.

All her work is focused around giving purpose to what we wear. To that effect she introduced New York Navigate before the PSFK audience, a GPS jacket that nudges the wearer to direct them left or right. This city-specific jacket gives the wearer the ability to walk around a city unimpeded by a map or app.