Author Bruce Nussbaum presents his book which looks at the ways in which we employ and harness the process of making.

Bruce Nussbaum, author of Creative Intelligence: Harnessing the Power to Create, Connect and Inspire, has set about dissecting the process of design creativity. Speaking at PSFK CONFERENCE 2013, he began by introducing his theory on the different dogmas of design, and how new ideas come into being. Based on the principle that design is a function of meeting wants, dreams and desires, he began with a quote from economist Frank H. Knight which defines these desires as the following:

The chief thing which the common sense individual wants is not satisfaction for the wants that he has, but more, and better wants.

Which is to say, design is a function of delivering higher order aspirations, above and beyond necessities such as food, water and shelter. 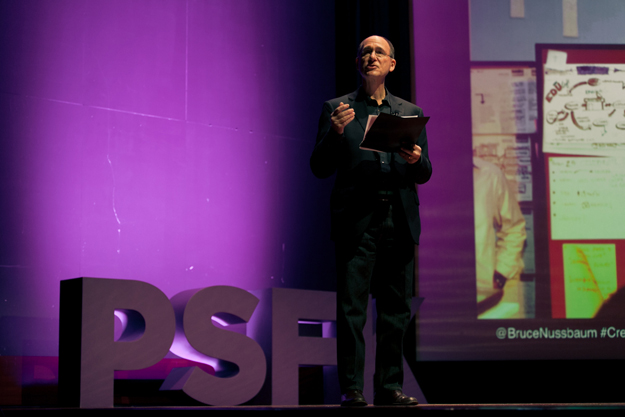 In practice this manifests as three distinct forms–or dogmas–of design. The oldest dogma is the the ‘gift dogma,’ which frames design as a gift from smart creators, which is then presented to consumers. The underlying idea behind this dogma is that people don’t know what they want until you give it to them, but it is hard to always give people something they like. Second, the ‘thinking dogma’ is now the most widespread dogma of design today, which frames design as a process by flipping the gift model around and starting with user needs first, and then relying on innovation to fill those needs. However, the main failing of this dogma is that it struggles to meet higher order needs which are not immediately expressed. Third, the ‘dogma of doing good’ uses design as a philanthropic tool to deliver necessary services to those in need. The problem with this is that the idea of ‘need’ is still defined by the giver and not the recipient.

Finally, Nussbaum pulls from these three points to put forward his own fourth dogma, which he calls the ‘dogma of creativity.’ This dogma looks at replacing ‘needs’ with higher order wants, replacing ’empathy’ with deep cultural understanding, and emphasizing ‘narrative’ over ‘story.’ By using the example of the problem solving process in the movie ‘Zero Dark Thirty’, and CIA’s search for Osama Bin Laden, Nussbaum sheds light on how the dogma of creativity can be used to overcome complex problems where traditional methods of problem solving are not effective, and new solutions must be discovered.

Creative Intelligence: Harnessing the Power to Create, Connect and Inspire