Dan Barasch Co-Founder of the Lowline, discussed his plans to remodel downtown Delancey Street in NYC.

Speaking at PSFK CONFERENCE 2013, Dan Barasch Co-Founder of the Lowline, introduced his project for a crowd funded underground green space andpark below Delancey Street in New York City. The Lowline is a proposal to transform the abandoned Williamsburg Trolley Terminal into a vibrant underground park, complete with natural light and living flora. 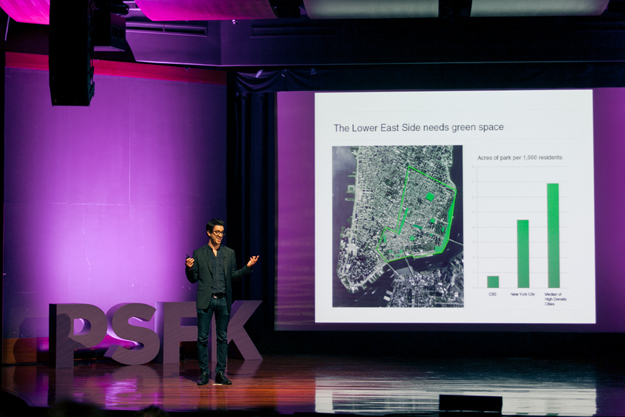 The challenge of the design was to figure out a way to funnel enough natural sunlight underground in order to support photosynthesis in the underground park. As a solution, Barasch along with business partner James Ramsey, developed a device shaped like a dish which collects light at street level, and transports it underground via fiber optic cables, where it is then diffused as a natural light source. Using this method, the pair utilized a darkened warehouse to test the device and simulate an underground environment, including an arrangement of plants and trees.

The experiential space was a success, and the project has since raised over $150,000 in Kickstarter for initial funding. As Barasch says, the key is to use these abandoned spaces in an interesting way, which both reinvents urban space and also preserves important objects of the past, and New York City both wants and is willing to pay for a project like the Lowline.