In this video, Timothy Goodman discusses how social media responded to a romantic experiment between friends.

Timothy Goodman, one of the creators of the 40 Days of Dating blog, spoke at PSFK Conference 2014 about his experiment dating his good friend Jessica Walsh for an allotted 40 days in a mutual relationship in early 2013.

Similar to the When Harry Met Sally logic that a man and a woman can’t be “just  friends,” the experiment tested Walsh and Goodman on the true challenges of dating a longtime friend.

With the knowledge that their lives are far from a Nora Ephron romantic comedy, the two friends set strict guidelines for their 40-day relationship:

5.     Fill out the daily questionnaire 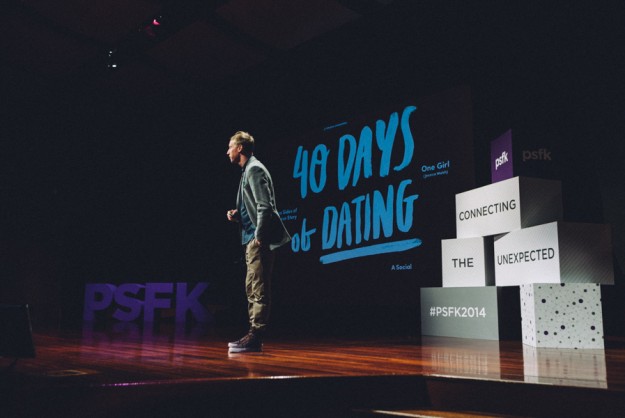 They tried mini experiments within the specified 40 days of their relationship, including holding hands for eight hours. Walsh and Goodman tracked these experiments and everyday interactions on their blog, and the response was huge. According to the pair’s Today Show interview with Matt Lauer, the two severed romantic ties after their 40-day run.

Regardless of the experiment’s results, the website had more than 5 million unique visits, 14 million total visits and the two received media attention from the likes of CNN, The Today Show and Time magazine. The two friends had become the model for modern dating. Some Twitter and social media followers expressed their obsession with the project and others deemed it the “new form of web reality.”

Among the positive feedback and attention, there were also those who expressed their negative feelings toward the project. One Twitter follower said the 40 Days project helped him “understand terrorism” and another called Walsh and Goodman “exactly the worst people in the world.”

Regardless of the feedback, Goodman says the project gained valuable media attention, including a movie script currently in the works with Warner Brothers. Watch Goodman’s talk in the video below.