The panel discussed the qualities of ideal leadership and how diversity can be attained for a better functioning workplace. This diversity starts with the understanding that the tech industry’s influence has expanded far beyond tech-related mediums. 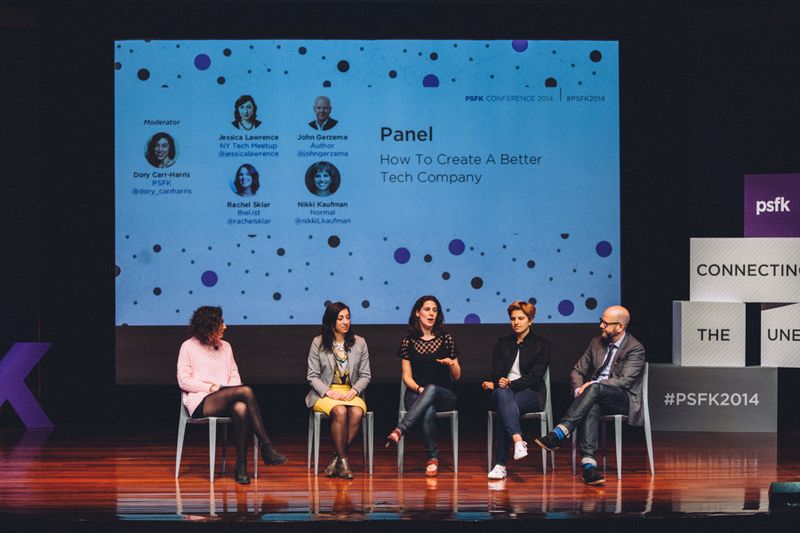 PSFK Managing Editor Dory Carr-Harris brought together Nikki Kauffman, Rachel Sklar, John Gerzma and Jessica Lawrence for a panel on how to achieve diversity in the workplace at PSFK Conference 2014.

The panel discussed the qualities of ideal leadership and how diversity can be attained for a better functioning workplace. This diversity starts with the understanding that the tech industry’s influence has expanded far beyond tech-related mediums.

Lawrence, executive director of New York Tech Meetup, says she has seen a shift in tech jobs that reaches people out to people outside of the tech industry.

“Over the last three years, the rate of growth of the tech industry has been tremendous,” she says. “New York Tech Meetup went from 15,000 to 40,000 members. That says something about the overall growth. Tech is no longer a vertical industry. It’s horizontal, cuts across every single industry.”

The problem, though, is this technology is not reaching the right audience. When there aren’t enough women in the workplace, the main audience is what Rachel Sklar, co-founder of  TheLi.st, refers to as “a very specific type of white man.” She says that when the right people are in the boardroom to introduce to innovative technology and resources, that is when real change can happen.

“I can have the most impact where I can push talented, smart, ambitious women and minorities in this sphere,”  she says.

Kauffman, Cultural Advisor to Quirky, says the company finds inclusivity and diversity through reaching out to people whose best ideas come from the living room and beyond the boardroom.

“We’re trying to make the people who come up with the ideas the heroes,” Kauffman says. “Whether you’re someone who sketched an idea on a notepad, we try to make anyone make their idea become reality.”

John Gerzma, author of the Athena Doctrine, notes that this inclusivity envisioned by Quirky is an indication that the argument goes beyond gender but rather the idea that everyone’s voices and ideas are heard.

“What’s interesting at this point is talking a little bit less about men versus women and talking about what’s going to make companies successful,” he says. “Diversity and inclusivity are really important but don’t always connect to the bottom line in the business world.”

Lawrence agrees with this point, saying that the necessary attributes of effective leadership all point to how someone is treated as a human being. 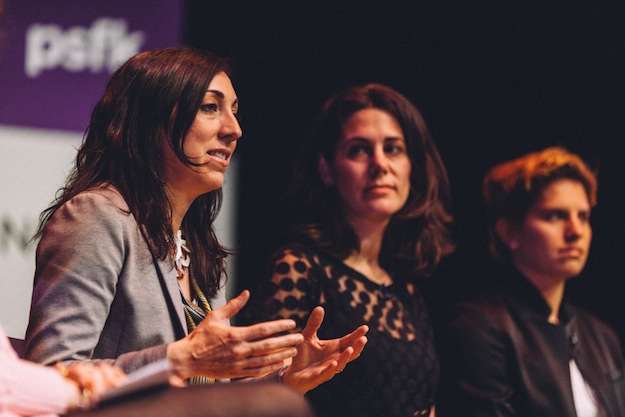 She says that when our society gets stuck in the idea that only certain need to be met for a niche of employees, such as women who need to take care of their children in the afternoons, it continues the stereotype that “women need one thing and men need something else.”

Gerzma says change can be achieved when we use different language to describe colleagues’ traits. What could be thought of as “soft qualities” that are predominantly associated with women. Gerzma says that just as women have “masculine qualities,” men posses a lot of “feminine qualities” that have a lot of value in today’s workplace.

“Everyone talks about soft skills,” he says. “Frame it in a different way and talk about if you really understand your customer and if you really understand the user experience. That’s empathy. Let’s talk about really difficult timelines and you need to work across geography with three or four different companies and you’ve got to do it under a compressed timeline. That’s collaboration, that’s candor, that’s sharing credit, that’s all those skills. So, we just need to reframe the way we talk about those things and connect them at the bottom line.”

Kauffman says transparency across all positions in the workplace is essential to successful collaboration. When everyone with different levels of expertise are able to freely communicate, inclusivity of each person’s abilities will be a natural process.

“Anyone can ask anything or know anything,” she says. “If you’re curious about what an engineer is working on or what a designer is working on, you can ask. I think that type of collaboration and openness can really help foster these different things and different types of diversity of women in all sorts of work environments.”

Lawrence adds that employers often wrongly try to solve the inclusivity problem by addressing needs that might not apply to everyone on a team. She says she’s spoken to many hiring managers of start-up companies who say they provide a keg or a ping pong table in the office because that’s what other companies are offering. Lawrence says his “competitive advantage” factor often wins out over more important values, such as diversity.

“The piece that we’re missing is that the ping pong table is not your culture. Culture is your underlying values and your behaviors. Oftentimes, we see that you might have all the symbolic stuff, you probably have a list of values on the wall in the break room. But the actual behavior of the company is very mismatched with what you say your values are. And it’s that behavior that makes diversity challenging.”

Sklar comments that when it comes to creating a more ethnically and gender diverse workplace, effort without results doesn’t warrant success. When she gets feedback from event coordinators telling her they couldn’t find enough women to fill speaker slots at events, she finds this attitude to be one reflective of the change that needs to occur across the board.

I think trying is great,” she says. “Being aware is great. But you can’t say to the caterer, ‘Where’s the food?’ And they say, ‘Well, we really tried but Zabar’s screwed up the delivery.’ You have to make diversity as much of a priority as the catering.” Watch the panel in the video below.