Hamdi Ulukaya, Chobani: Why The First Step To Success Is A Small One

Hamdi Ulukaya, founder of Chobani Yoghurt, discusses how tackling uncertainty was the key to success at PSFK CONFERENCE 2013.

Speaking at PSFK CONFERENCE 2013, Hamdi Ulukaya, CEO and founder of Chobani Yoghurt, related the story of how he came to America, how Chobani came to be, and how it went from zero to a billion dollars of business in just five years. Born in Turkey and having become an accomplished feta-cheese-maker, Ulukaya described how he had been living in Upstate New York when he found an advertisement for a yoghurt plant that was recently closed down by Kraft, which he initially disregarded and threw away. But, listening to his gut, he fished it out of the rubbish bin and went to go see the place. He decided to buy the plant, despite friends telling him otherwise, and hired a small staff of 5 people. 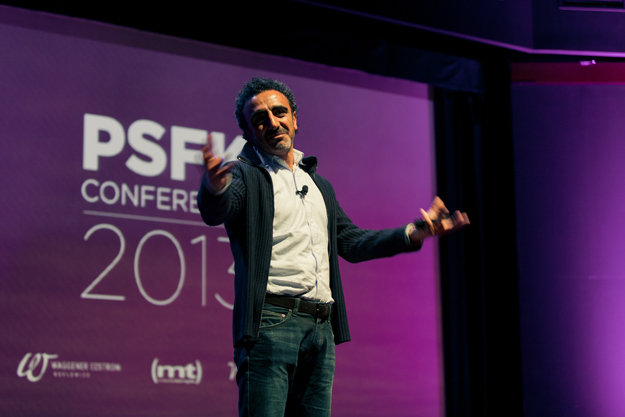 With no plan, and nothing more than the idea to make Greek yoghurt for people to enjoy, Ulukaya wasn’t sure where to go next, so be began by repainting the walls of the factory. Importantly, it was this act that gave momentum to his team; rather than sitting around and thinking what to do, they began by doing something, a simple act, which gave way to more and more ideas as momentum increased. Ulukaya highlights that this act became the way of Chobani; rather than sitting around and thinking about what to do next, solutions were found by taking a small step forward, that created greater and greater progress.

Two years later Chobani was launched, and is now a fixture on grocery shelves across the country. Not only did his dream work, but it worked tremendously well. Ulukaya proves that believing your gut instincts and going ahead with the first step, even if you aren’t sure of the exact plan ahead, is crucial to success.