Why an investment in tools and platforms is essential for growth in new media. 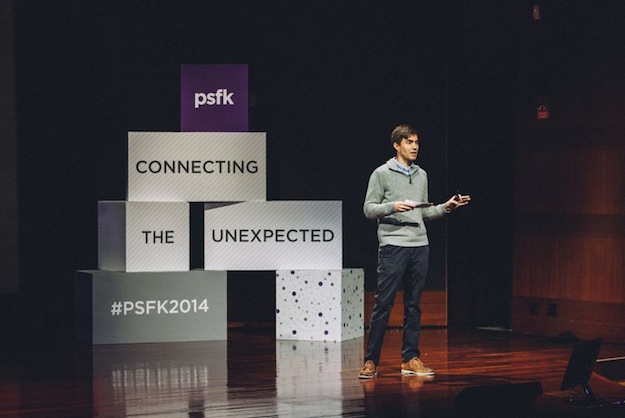 Ricky Van Veen, founder of CollegeHumor, spoke at PSFK Conference 2014 about the need for media that dares to push the boundaries on engaging entertainment.

Van Veen, who spoke at  the PSFK Conference in 2008, says he was invited back this year to discuss the changes he’s seen in his own company and in online media during the past six years. Van Veen says during his 2008 talk, he posed the question of whether Internet stars could retain exclusive online fame and not aspire to other entertainment mediums.

The online media entrepreneur  says this shift still hasn’t happened; the Internet can’t offer the same amount of revenue as television. But since his last visit to our conference, Van Veen has noticed that the power of online gatekeepers has grown.  These “gatekeepers,” including Netflix and Hulu, are ushering in a new age of television, where shows are available on platforms outside of the mainstream channels.

He says the new generation of children doesn’t know or care “whether they’re watching a cartoon on Netflix or a cartoon on Cartoon Network.” While these gatekeepers are changing the way that television is distributed, Van Veen says the real change as occurred in websites that cannot be streamed through television.

“The advent of social has severely impacted if not almost killed serialized content on the web,” he says.

Van Veen emphasizes that the problem with streaming series through websites is that content users are less likely to share links to parts of a series. There is often too much missing content. After experimenting with series, such as a cartoon satire based on the North Korean conflict and Kim Jon Un, CollegeHumor decided to launch one-offs, including the popular video “If Google Were A Guy.”  One-time videos such as these receive more hits and attention because they don’t require any context.

Van Veen says a knowledge of technology and how it works to advance today’s media is essential to be successful in any endeavor, including his own efforts with multimedia platforms.

“If you’re going to start a media company today and not pour millions into technology, I wouldn’t bother because you’ll just get eaten alive by the companies that can,” he says. Watch the rest of his talk in the video.