Rodrigo Nino, CEO of Prodigy Network, is moving urban funding into the hands of the public in Bogota, Colombia.

Rodrigo Nino, CEO of Prodigy Network, spoke at PSFK CONFERENCE 2013 about building a crowd funded skyscraper in the city of Bogota, Colombia. With a population of over 10 million, Bogota is a quickly growing metropolitan center. This growth is predominately horizontal rather than vertical, which is creating a problems involving traffic and pollution. With 1.7 million daily commuters heading into the center of the city, the average commute from door to door in Bogota is between 75 to 90 minutes every day. This problem of horizontal growth is the biggest issue facing cities in emerging markets. The solution is to go vertical, building skyscrapers to create greater density and centralization. 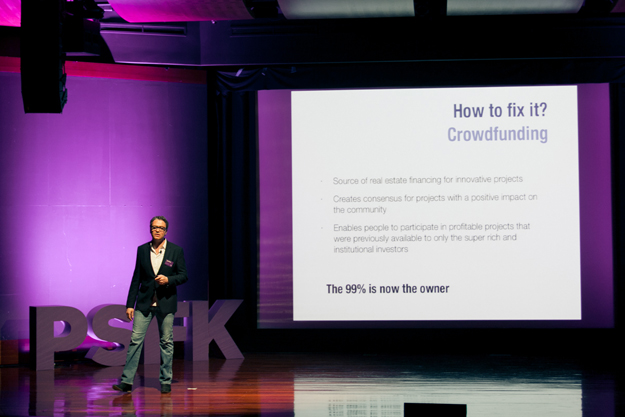 The issue is raising enough capital to build such structures, and generally necessitates the involvement of large and powerful institutional investors. However, Nino envisions another way, which puts the power in the hands of the people of Bogota. By turning to crowd funding to build a skyscraper, the residents themselves become the owners of the project. In order to make this a reality, Nino has been combating the misconceptions that crowd funding can only be used to finance small projects, that it is only for local communities, and that crowd funding in real estate is not safe.

With Prodigy Network, Nino is taking crowd funding to a new level. His overall message is to think bigger, and that one day the platform of crowd funding could be used to fund an entire city.