Rodrigo Nino, Prodigy Network: How The Wisdom Of The People Fuels Innovation

In this video, Rodrigo Nino talks about why crowd-sourcing provides the answer to successful and economical growth.

Rodrigo Niño, CEO of Prodigy Network, emphasized to attendees of the PSFK 2014 Conference the importance of crowdsourcing when pursuing innovative and effective change in the world.

Niño says that when companies and countries look outside of the opinions of the “experts” and to the wisdom of the public, they are able to find their best solutions.

He used NASA as the prime example of these crowd-sourcing techniques. NASA recently hired Boeing to create an algorithm to reduce sun exposure to astronauts when circling the earth. When a Harvard professor launched  crowd-sourcing competition, Tournament Lab, to garner algorithm submissions, a 21-year-old  from China submitted an algorithm 55% more efficient than Boeing’s.

Niño also referenced the “flight to quality” during the recession. US institutional investors collectively decided to put their money into treasuries and gold to protect the public from a failing market. These markets dropped significantly less than the national average during the recession. 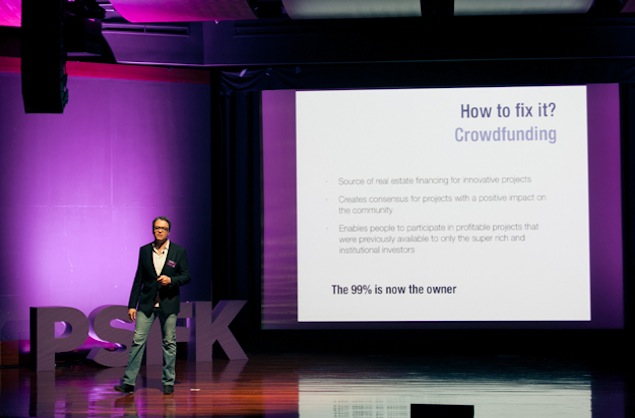 At the same time, Argentina took a note from the US investors. Projects, such as the Bogota Art District, were funded and designed by a crowd of investors. Local upcoming artists live and work in these communities that would have otherwise been impossible for a starting artist.

With its new hotel project in downtown New York, the Prodigy Network is working on the first urban platform created by crowd design. This project allows architects from all over the world to remotely collaborate on the structure of a project in the U.S.

“In general we believe that crowd funding is the way to level off the playing field for everybody and democratize the way we see things,” Niño says. “I think that we all need to stop trying to be experts. We need to be curators of the true wisdom of the crowd.”