In this clip, Scott Thrift and Ari Kuschnir speak about the launch of ThePresent

Editor’s Note: Having just received our very own ThePresent annual clock, we thought we’d re-share the talk that Scott Thrift and Ari Kuschnir, the clock’s creators, gave at PSFK CONFERENCE 2013 back in April. It is a great product, check it out here. Thanks Scott and Ari!

Scott Thrift and Ari Kuschnir, founders of m ss ng p eces, spoke at PSFK CONFERENCE 2013 about how the concept of their annual clock evolved from idea to reality. Their partnership started when they began working together over 10 years ago, producing, writing, and directing their own short films. Although they are still working together pushing the boundaries of creative film and advertising, they have steered themselves into developing a physical product. 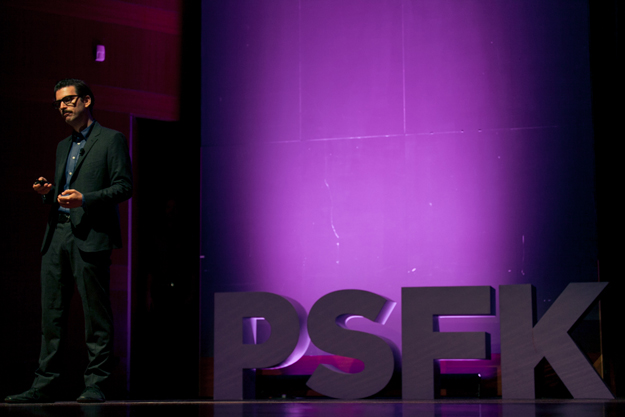 Born out of countless hours spent in the editing room, sitting in darkness with time passing by almost unnoticed, Scott Thrift started to experience time in an entirely different way. In order to visualize this different perspective of minutes and hours, Thrift came up with the concept of the annual clock: a clock face which makes one revolution per year, with the hand passing through different colors representing the passing of the seasons.

In order to make this concept into a reality, Thrift turned to Kickstarter. After many months of careful planning and development, the result was not only a fully functioning device, but one that was able to automatically calibrate itself to the current time of year when powered on for the first time. Overcoming the difficulties of learning how to produce a physical product, the annual clock, called ThePresent, has already been sent out to hundreds of addresses across the world. The concept takes an interesting look at how perceiving time in a different way can fundamentally alter our perception of reality.